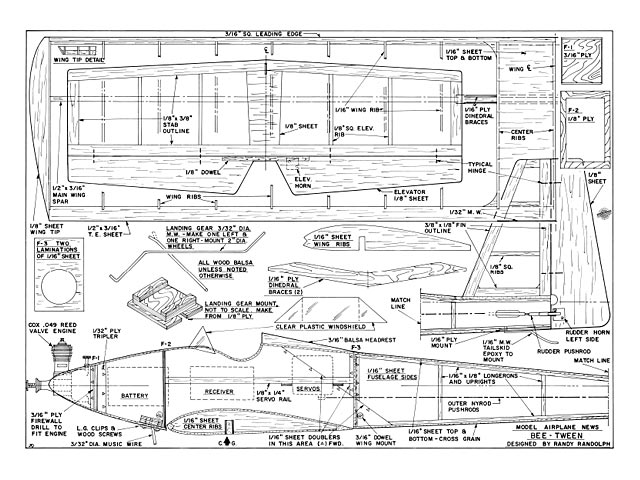 Quote: "ALMOST EVERY MODELER has at least one Cox engine: the Golden Bee, Black Widow, Texaco, Dragonfly, or QRC. In fact, so many have been sold that almost everyone in the country could have one; As a gateway to the R/C experience, they're about the least expensive, most easily obtained and installed power sources that can be found.

The 'Bee-tween' was designed as a low-cost, easy project that's suitable for these ubiquitous Cox engines. It could very well serve as a first plane for someone who wants to get into the sport of R/C flying. Its low-wing configuration is a little more glamourous than the common high-wing trainer, yet it retains the stable flight characteristics of a trainer.

Because the airplane resembles those that were popular during the Golden Age of aviation, I chose a color scheme that fits that period. The blue fuselage, the yellow wings and the Golden Bee powerplant prompted friend Tom Anderson to provide the name.

CONSTRUCTION
Usually, wings require a lot of work, so they're a good place to start. Only the left wing plan is shown; the right wing is built over the same plan with the center section reversed.

The ribs are made of 1/16-inch sheet balsa. Place a card-stock template of the rib onto the balsa, and trace around the template with a felt-tipped pen. Do this 16 times so that you'll have a 'printed' sheet from which to cut. Once you've cut the ribs, stack them, pin them together and 'gang-sand' them to smooth out any high or low spots. Select four ribs, trim 1/16 inch off the top and bottom of each, and enlarge the spar notches; these are the center-section ribs.

You can buy spar stock, but to ensure uniformity, it's better to use one piece of sheet wood that you strip with a straightedge, a razor knife, or a balsa stripper. Your choice of wood depends on how it's to be used. The wing spar and the trailing edge should be cut out of firm stock, and the wood for the leading edge should be slightly softer. Cut the tip pieces out of soft, Vs-inch sheet, and make sure that the grain on the tip pieces matches that on the plan.

Build-up the spar by using the plywood dihedral braces as guides, and make sure the wood isn't warped. Cover the plan with waxed paper, and pin the main spar into place on the plan. Allow the other half of the spar to stick out from the building board. At-tach some ribs to the spar, and use them to position the trailing edge so that it will match any slight difference there might be in the length of the ribs and the plan. Pin the trailing edge into place and, starting with the two trimmed center ribs, glue the ribs into position. To install the center rib, position it at the proper angle to match the dihedral. One-sixteenth sheet shims under the center ribs help to position the ribs properly so that the center-section sheeting is flush with the spar and the trailing edge when it's installed. When all the ribs are in position, add the leading edge. Build the other wing-half in the same way with the spar flat on the bench, and let the finished wing half extend past the bench.

Glue the tips to the two tip ribs. The tips slant upward and are flush with the top of' the ribs. Use scrap spar mate-rial to build between the spar and the tips. Add the center-section sheeting; the sheet goes between the spars rather than over them. Sand the completed wing.

Like the wing, the stab and fin are built right over the plan. The rudder and the elevator are sliced out of soft 1/8-inch sheet. The elevator carry-through is a piece of 1/8 hardwood dowel. When the elevators are complete, join the mating surfaces and sand..."

Hi Steve, Here is the last of the currently scanned batch. The Bee-Tween plan was nice and clean, little work needed... Cheers, 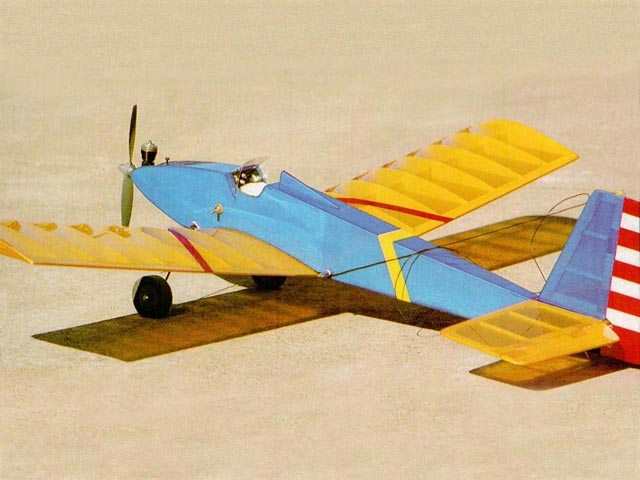 Great flying plane. I would make the wing stronger than the plans show. My wing snapped when I pulling a few Gs. I love this plane.
jls - 08/03/2019
Enclosed photos of my Bee-Tween (oz8770). Really fun to build and even more fun to fly. Converted to electric [more pics 003,004].
HansPetterStue_Norway - 04/09/2019
Hello, I send you the photos of my bee tween built from the plan that is on the page. This is the second one I build, and tweaked it a bit to improve flying qualities. Among the improvements made is the lengthening of the nose in order to reduce the amount of lead that I had to add to the first to correct the CG. Another thing that modifies is the main wing spar that frosted it with two pine instead of a single raft. Cheers,
Nico - 23/03/2020
I lengthened the nose an inch, balances perfect with the golden bee, multi spar wing like his other designs, aluminum gear [pics 008-010]. Cover lite covering. Flies great, lots of fun to build and fly, with the throttle rings it will putt around at idle or multiple loops at full throttle, touch and goes etc. I added a steerable tail wheel and snoopy.
Steven Swinamer - 24/03/2020
Add a comment