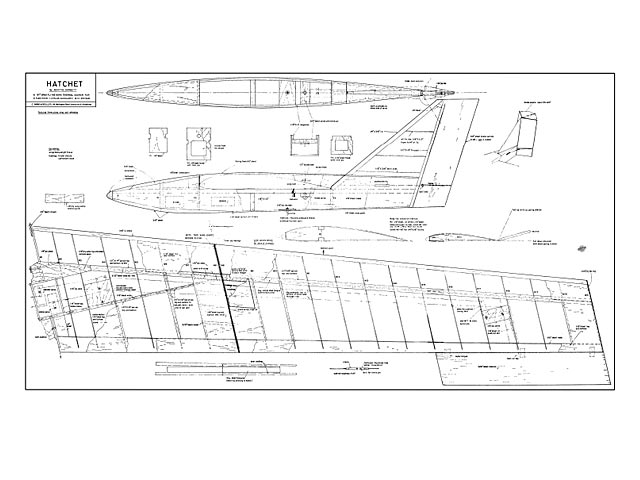 Quote: "This tailless model originated from a desire to build something different, as a tow-line glider for radio control. I also had an eye on the multi-task rules, and I think that flying wings may have something to offer in this area. Since it was to be an experimental model, I decided to use a 'conventional' wing section, combined with sweepback, as this seemed beneficial when the longitudinal stability is provided by the elevens at the tips. To speed up construction, a nacelle was built to take some of the radio equipment, although it was originally envisaged that all the gear be housed within the wing itself. The fin is integral and the split rudder airbrake, which I devised, is very effective yet extremely simple in construction.

CONSTRUCTION: Nacelle: Construction overall is very normal and quite uncomplicated. As may be seen from the plan, the nacelle is a basic box structure with some block at the nose end to help blend the lines together. It is worthwhile to check for free operation of the airbrake cranks through the nacelle sides before sheeting the rear top part, as this will save a certain amount of fiddling at a later stage in proceedings. The original nacelle was covered in heavyweight tissue, doped on.

Wing: Although basically very easy to build, some extra care is required when joining the two centre-section halves. My method is to make up the main spar assembly first, so that the tongue and box assembly is built in, and the two spars spaced with a few webs. The lower spar is then attached to the lower leading edge sheeting and this assembly now positioned over the plan. 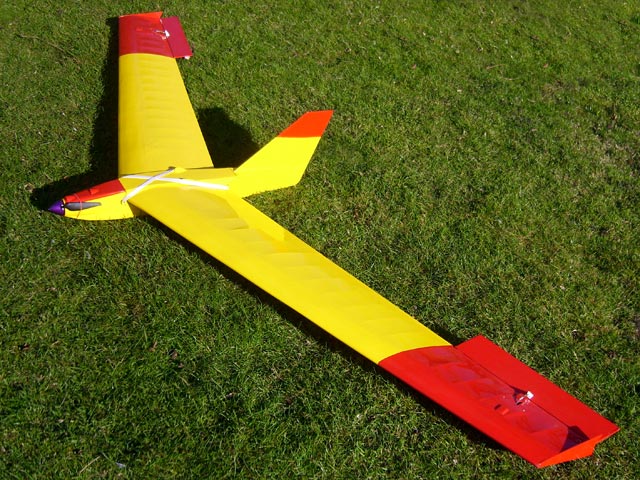