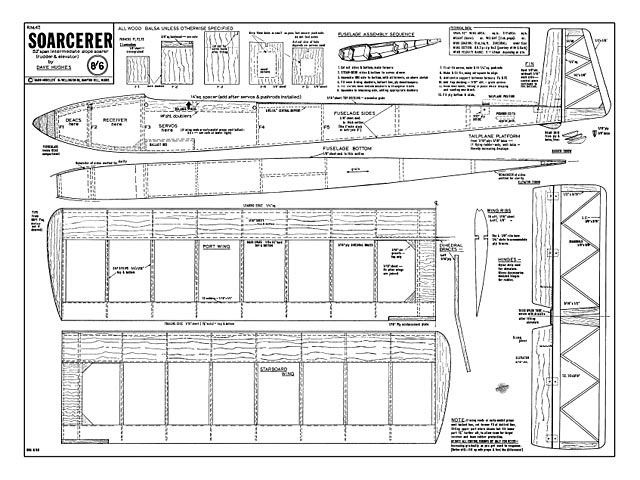 Quote: "Dave Hughes's charming little intermediate slope soarer that is a real delight to fly. Originally designed for rudder-only but now with two-function proportional, 'Soarcerer' will do everything a model of this type theoretically should not - rolls, bunts, inverted flying and guaranteed first-try spins. Stays airborne on the merest whiff of lift - and is also quite happy in winds of up to 40 mph! Don't ask for the why's and wherefores it just happened!

THE background story of Soarcerer really began with my experimental single channel Friday Knight prototype, as described in the June 1967 issue of RM. The Mk.I version had plain 'vee' dihedral (10 deg) which, with the relatively large fin and small rudder, did not give a fast enough response or tight enough turn. Mk.II (RM Plan No.16) featured a polyhedral wing which gave satisfactory turns with this fin/rudder set up, though still not enough for any violent manoeuvres. The next model, I decided, was to have a tiny fin - no more than a 'post' to hang the rudder onto - and a huge, Slingsby-type rudder.

To accommodate the full depth rudder, operated by a push-pull rod from a motorised actuator, rather than the SK's torque rod, the underslung tailplane was replaced by one on top of the fuselage, in front of the fin - the overall fuselage length being increased by a couple of inches or so to maintain the same wing to tailplane moment arm. The original vee-dihedral wing was used.

This set-up certainly showed promise though, with the purely 'bang-bang' rudder operation of a single channel actuator, it was somewhat twitchy and quite violent in response. Just at this point; I acquired my first proportional outfit and became preoccupied with larger and heavier soarers, so Soarcerer was put aside in the loft, with all those other discarded models that I might tly again one day, you never know.

This year has produced more hot, almost windless days, at the slope, than I can remember for a long time. I began to tire of carrying my 5-1/2 lb Big Eagle to the top, to read only 5 or 6 mph on the wind meter (BE will remain aloft in about 8 mph once up - but to launch it into anything less than 10 would be grossly unfair - besides meaning just another climb). So my thoughts turned once again to Soarcerer and I retrieved it from the sooty coolness of the loft, and built for it a new tailplane, complete with elevator. I then fitted my Staveley proportional gear. With receiver, Deac and two of the four Kraft servos, the all-up flying weight was just 27 oz, making the wing loading around 10 oz/sq ft - not exactly a thistle-downer, but pretty lightly loaded for a sloper.

The weather on the following Sunday did not get up to its usual perverse tricks and provide a howling gale. It just continued sunny and almost windless, so first flights were not delayed.

Flying: I must admit that I was rather taken aback by the lively control response and, over-controlling, stalled Soarcerer and made it wallow about like a wounded pheasant for the first few minutes, until I began to realise that very gentle pressure on the sticks was all that was required for guidance - not violent movement - this came later when I had her weighed up.

Watch that stall, therefore; the breakaway is quite sudden and
can take you unawares, because the model will float along quite gaily on two whiffs of nothing, but pull the stick just that little bit too far back and - womp! - there she goes, though recovery is easy and quick if you have quick reflexes. Once you've got used to this, though, you can forget it, except that the sharp stall is undoubtedly, responsible for Soarcerer's lovely spin, which it will always do to order. (In fact, with the failsafe feature on the Staveley gear, have, in effect, a 'spin switch' - just switch off the Tx and the servos go to full travel (as it happens 'up' and 'right') and the model spins. I don't really recommend this, however, (certainly not if anyone else is on the air - you'll probably just get down elevator!) and I reserve it for my party piece.

Manoeuvres: Having flown the model in light breezes for a few sessions, and become used to varying amounts of control movement, I put it up in a 15 - 20 mph wind, with some slight misgivings. But I needn't have worried, Soarcerer really relished this and made height very fast. Just 'leaning' on the elevator produced good penetration without too much loss of height. I have, in fact, now flown Soarcerer in winds of up to 45 mph when she still coped very well. The only hazardous parts of flying in these conditions are launching and landing!

There were times, usually relatively near the slope, when it could be observed that, on feeding in 'down' to get penetration, the model would simply sink (bearing out, once again, Chris Bashford's points on ballasting, and I have incorporated a ballast box, as will be seen on the plan). However, once away from the slope this effect was not nearly so pronounced.

Let's try throwing her about, now that getting height is no problem. Whack over the rudder - and a nice roll over and a 'reversal' is easily attained. What about a roll-off-the-top? Half loop and slam on rudder - well, she did roll out, but about 45 deg off heading - try again, that's better, but you put the rudder in a bit early and nearly slowed the model up too much. Again, dive for speed - half loop-and--a-bit-more - now rudder - yes much better, I can see this is just a matter of practice and timing.

Rolls: Well, if she'll half-roll, maybe she'll do the whole thing. Yes! With just rudder you get a very barrelly roll, but a roll nevertheless. With some practised co-ordination..." 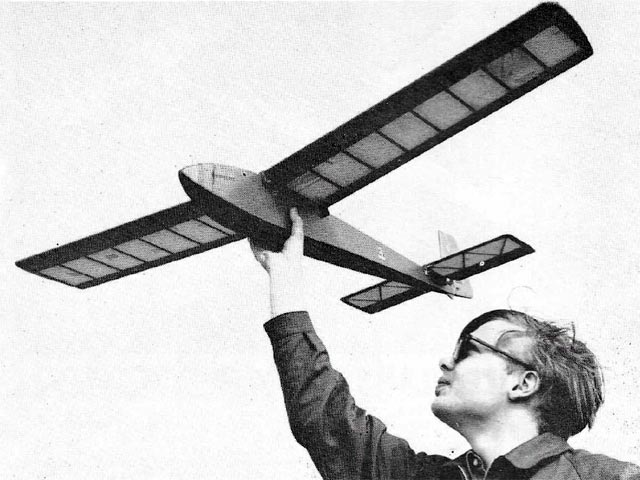 This is the model that really taught me the basics of r/c flying. I had no access to an instructor so it was a case of 'do it yourself'. Needless to say, my "Soarcerer" took a real beating but it was one tough model. With an old Fuji 15 sitting on a pod (I fly flatland), time after time and crash after crash it just kept right on flying! Eventually I partly sorted out my skills until one day it got 'planted' for the final time in a high speed spiral dive that I didn't know how to recover from......... I still have the fin & rudder from that model for memories sake..... I should build one more. Thanks to whoever submitted this plan and and always, please keep up the good work, this is a great site!
MarkStanley - 29/05/2017
My cheeky Soarcerer for the site [more pics 005].
CharlesT - 02/06/2017
Another model I've built is Dave Hughes' Soarcerer. I don't build many models more than once but I love this design so much this is my 3rd one, the first being around 1970. I like it so much that I scaled it down, called it the Soarcerette and you now have it in your catalogue (oz4649 ). Here's the pics of the new one which flies brilliantly as they all did [more pics 006, 007].
PeteStartup - 30/05/2019
Dear Outerzone team, please find attached pics of Soarcerer from plan ID oz8762 [more pics 008-010].
KevinSmith_Gloucester - 11/06/2019
Add a comment