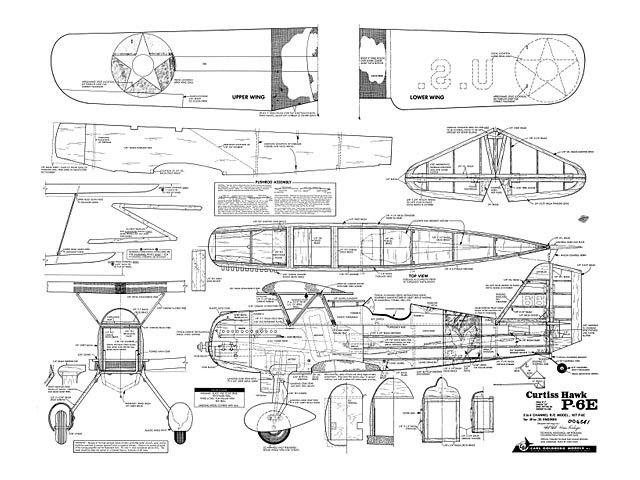 Quote: "Designed and drawn by Bob Rich, Warren Komberger. Special thanks to RCM for color photos and original plan by Dick Kidd."

Note this kit used foam wings, also plastic moulded upper decking, so no ribs or formers are shown for these parts. Likewise the spats and cowling.

Quote: "Carl Goldberg's P-6E Hawk. A blend of balsa, foam and plastic makes this kit of a 1930's classic biplane a rugged and easy-to-build R/C project for .19 to .35 size engines and four channel radios. Review by Rich Uravitch.

Back in the days when no one really thought much about camouflage, and esprit de corp manifested itself in the form of flashy paint work and coloring on military airplanes, people were treated to the sight of colorful, personalized flying machines. The glint of the sun off yellow wings; the business-like rumble of the 24 cylinder engines at idle, even the pursuit planes pilot's ever-present white silk scarf - all part of the bygone era. The last modicum of unique markings on military airplanes seems to have slipped into the past - the striking schemes of the Naval A-7's, F-4's and F-14's have all given way to subdued, low visibility finishes - mundanity in varying shades of gray!

If one single airplane ever represented everything flamboyant about an era, the Curtiss P-GE Hawk would certainly be near the top of the list - bedecked in a beautiful paint scheme (at least those from Selfridge Field, Michigan), wheel pants, smooth cowling, every line seemingly drawn from an esthetic viewpoint first, design second and a biplane to boot! In the words of Von Klugner: So, what could be bad?

The Carl Goldberg kit of the Hawk represents a fairly quick building, moderately sized replica which can be built and flown successfully by modelers having some previous experience. The kit contents include four (4) molded foam wing panels, a nice array of die-cut balsa and ply parts, a sheet of vacuum formed plastic parts including the wheel pants and cowl, a colorful decal sheet (film type, not mylar) and an excellent set of full size plans to be used in conjunction with the well illustrated construction manual.

Actual building was begun with the empennage which is of built-up spar and rib construction. This provides a strong, light weight structure with the added advantage of appearing more scale-like when covered. No difficulties will be encountered here. The fuselage builds rather quickly, but some minor changes should be incorporated. When bonding the ply doubler, use epoxy rather than the recommended contact cement. When the 3/16 balsa triplers (yes, Virginia, triplers) are added, pulling the fuselage sides in to match the firewall becomes somewhat akin to infidelity - almost impossible without separation.

In retrospect, I found the triple laminated forward fuselage a bit overbuilt, since it adds unnecessary weight. To reduce some of this weight, I cut lightening holes in the fuselage from front to rear on both sides. The first thing that strikes you upon assembling the airplane for the first time is that it is 'dense'. My particular model came out at exactly the box listed weight of 3-3/4 lb. It still strikes me as feeling a bit heavy for its size.

After all of the actual building and pre-fitting had been completed, the entire airframe (wood parts only) was finally sanded and given one coat of Balsarite and the fuselage covered with Silkspun Coverite. Since this material requires high heat for application, it was only carried up to the mating edge of the preformed plastic upper section. Minor imperfections and seams were filled with a micro balloons/resin mix followed by..."

Quote: "Mark Wilkins shows us how to convert a classic kit to electric power, with some essential repairs on the way.

Background: I recently picked up this vintage Carl Goldberg P-6E Hawk kit on eBay; basically it is an interesting kit of an interesting plane. The kit is interesting in that it is a hybrid; it is part classic balsa/ply covering construction, part plastic, and part foam! This type of kit marks a transitional period in kit approach pertaining to materials and techniques. The plane itself mirrors this concept too in that it was a transitional aircraft of the interwar period - when the US Army Air Corps was pushing the limits of the biplane, and I must say the P-6 Hawk is one jazzy biplane. This plane was introduced in the same year (1927) that Lindbergh flew the Atlantic in his Ryan monoplane - a sleek silver harbinger of things to come. The Hawk went into production in 1929, and less than 100 were built.

In terms of an electric conversion, the key issue with this kit was its weight. I modified what I could to lighten the model, while still preserving the look of the plane as the designer intended. As those familiar with this kit know, it includes a plastic turtle deck, which initially appears to be a time-saver. However, it took a lot of finessing and tweaking to get it to fit correctly, so at the end of the day it might just have been simpler to build it out of balsa and covering (or balsa sheathing). The wheel pants also looked like they would go together quickly, but here too much time was spent getting the alignment right; these too may have been easier to make from balsa and ply laminations.

Finally, the flight performance was surprisingly good given its weight. The aerofoil of the wings is thick and I used a good-sized motor and prop so under full power this bird really shines. It has a steep glide path so you'll want a bit of power for landings to smooth things out.

It was designed as a simple 3-channel set-up; however after somewhat sluggish turns I cut free the ailerons and installed servos in pockets carved out of the underside of the lower wings. It handles much better now. I would definitely recommend full controls to future builders of this classic Carl Goldberg kit!

Construction: My kit came damaged, so the first task was to cut out two new fuselage sides from 1/8 thick medium-density balsa. I was able to salvage the 1/16 ply internal laminations by carefully pulling them apart from the broken fuselage sides. After some scraping with a nice sharp scraper, they were ready to reinstall.

This kit is definitely robust in its construction and weight, at least from the wood perspective, so I planned on lightening up this old girl - especially in the tail. The recycled ply parts were glued on to my new balsa sides, which worked well. Next I added the vertical stringers and cut some lightening holes to decrease the tail weight. I decided to eliminate the epic slab of 1/4 balsa that runs from nose to after part of the wing root, and substitute some simple formers and sheath it in either 1/16 or 1/32 balsa sheet.

The fuselage went together fairly easily, and sure bends around the formers and cabane supports easier without the quarter inch of balsa on the outside. As the fuselage began to take shape, I began to get a sense of the engine compartment. It became apparent that the brushless motor will sit down low on a secondary firewall with ESC above. There is a vent at the front top of the cowling to provide cooling for the ESC..." 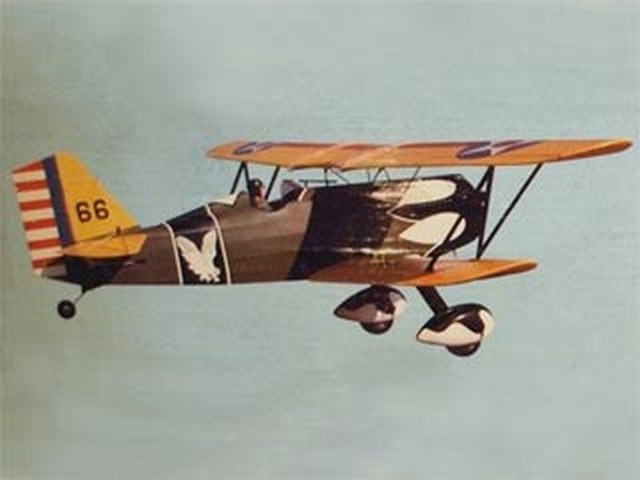