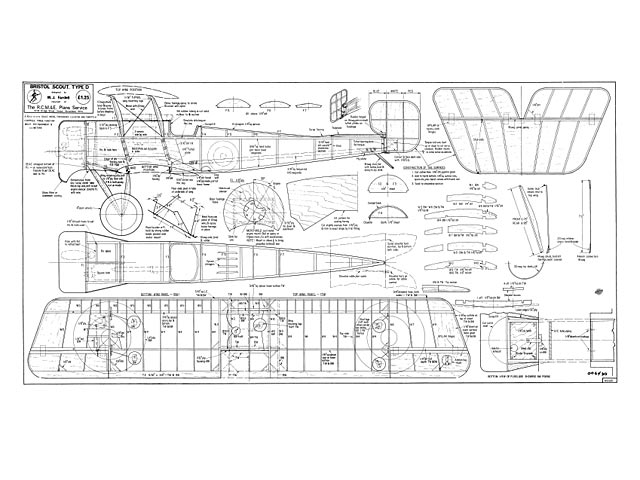 Quote: "I Started out with the intention of making a semi-scale sports model which was quick to build, but under the influence of Eric Coates' excellent series in Aeromodeller on scale biplanes it turned into quite an accurate model. Not so quick to build, but still quite straightforward, and very satisfying.

Eric Coates' series was mainly about free flight models; with free flight you stand a reasonable chance of keeping the wing loading low enough for the model to fly somewhere near scale speed. Unfortunately this is not so with small radio controlled models. There is no way of making a small, scale WWI biplane, with multi-channel radio, fly at a scale speed. They seem quite slow, especially if you are used to pylon racers, but a trip to Old Warden brings disillusionment; those real biplanes creep about the sky like little snails. Nevertheless, this model is great fun to fly and the effect in the air is quite real, because the way the model flies is right, even if the speed is wrong.

The Bristol Scout was one of the first British single sealers used for fighting, as opposed to purely observation duties. As such it played a significant part in fighter aircraft development. Frank Barnwell, the designer, made several changes to the Scout during the years that it was in service, and the various modifications to airframe, engine and armament are described in detail in Profile No. 139. In fact there are so many possible permutations of engine, armament, aileron size, tailplane size, rudder size, centre section shape, cowling shape, dihedral angle, etc, that few of the 374 Scouts made can have been exactly the same. The aeroplane was very popular with pilots, having beautiful handling qualities, but for an unknown reason it did not remain in production when gun synchronising mechanisms became available. Its effectiveness as a fighter was consequently always limited by poor armament.

I decided to use coupled ailerons and rudder on this model, after experience with a similar Sopwith 1-1/2 Strutter which was very sluggish turning on rudder alone. Everyone seems to agree that ailerons alone don't work too well on scale biplanes, there wasn't room for four channels, so it had to be C.A.R. It does save weight too. In practice it has been completely successful; the model is very quick to respond to turn signals, which is a great help in gusty conditions. Flying qualities generally are pleasant and viceless. I have tried it occasionally on ailerons without the rudder connected, and it still seems to turn quite well. I usually get nervous and suspect that it is not going to respond at a vital moment, and quickly reconnect the rudder. I don't have much inclination to experiment with scale models, once they are flying well!

There are no serious departures from scale as far as I am aware, although a certain amount of line detail has been left out..." 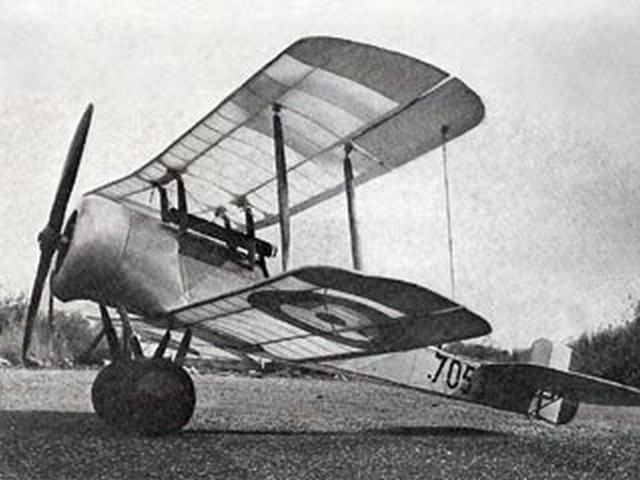