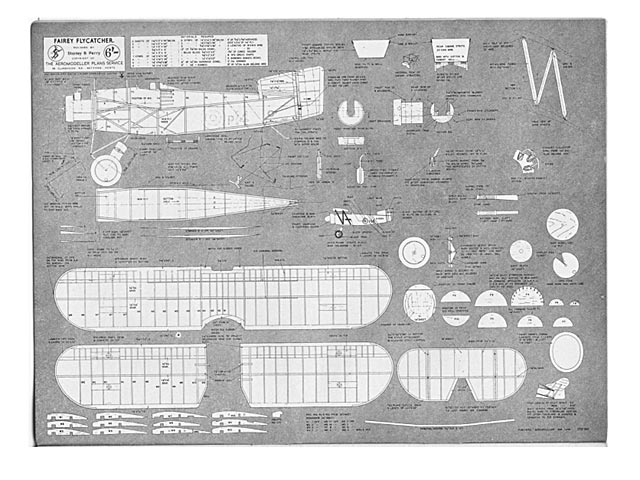 Quote: "Aircraft on the cover - the Fairey Flycatcher, by Stanley B Perry.

THE FLYCATCHER was one of the early post 1914-18 war generation of fighters and was considered a very good aircraft. Its outstanding qualities were extreme noisiness and (for its day) an excellent speed range. It was the first fighter specially designed for deck flying duties to go into production and was available in both land and seaplane versions. Beginning service in 1925, it was issued to Nos 401-8 (Fleet Fighter) Flights of the RAF. On the plan are Courageous aircraft colour details and with the relatively simple construction of Mr Perry's Flycatcher in miniature, enable one to produce a realistic model with sports type flying performance.

Fuselage: Build the basic box structure, as in heavier outline, noting that spacers from F.6 aft are of 1/8 x 1/16 strip. See that the double stern post allows good access for the rudder pendulum. Cement the front former securely to the structure and attach the front and rear cabane struts. Now add the remaining formers and the side, bottom, and aft top decking stringers. The undercarriage may now be bent, soldered and bound to the fuselage.

1/32 sheet top and side decking can now be added up to the cockpit and the upper mainplane supports bound and soldered to the cabane struts. Add 1/8 nose planking and front former fairing. The complete tailplane outline (with the exception of the edges of the elevator cut-outs) is made by laminating 1/8 x 1/32 strips around a cardboard former. Round off the corners so that the tailplane is a simple flat plate, and mount on to top stringers. The fin can now be cemented on to the fuselage after which the rudder can be built complete with pendulum arm and attached with silk-strip hinges.

Wings: Take care to construct the upper wing strongly as it takes up all the lift loads of both wings. The long dihedral braces are important and should be well cemented to the spars. Note that the centre section of the upper wing is flat with the dihedral starting at the double ribs. The lower wing has no dihedral. Press studs are sewn to the wings with cotton and cement. The wings are covered with Modelspan. Before any water-spraying or doping is commenced, the tailplane struts should be fitted. This will help to prevent tailplane warps. The original model was water-sprayed and given two coats of clear dope and two coats of silver primer. The headrest should be cemented in place after clear doping and before silver is applied.

Whilst this is drying the wheels can be made. The only difficulty with these is getting the brass bush square and true with the ply disc. The original wheels were made up complete except for the cones and then the bush was bolted into place. If the wheel is then placed on the axle and spun, any wobble will show up; by straining the wheel in the right direction, the wobble can be removed. Then lock the bush in position with cement, fit the card cone and string rim, and retain on the axle with an 8BA Hex nut.

Dummy engine and engine mounting: These are made as a complete unit, complete with bearers as on the drawing. It is cemented firmly to the front former. It is not a detailed scale engine, but has a realistic appearance.

Flying Notes: Approx 1 oz of ballast was necessary in the nose of the original and the CG on the drawing is checked from the model in flying trim. The upper wing is strapped fore and aft with rubber bands to the cabane structure. The lower wing is plugged into the fuselage and the struts clipped on. Then the lower wings are strapped together with rubber bands under-neath the fuselage.

The original has a left-hand climb with a fairly straight glide. On no account alter the wing and tailplane incidences. Any fore and aft instability should be cured by ballast or by variation of thrust line.

A 12 ft take-off run and then ground-wash effect keeps the model low until the speed builds up for the climb. Do not try short power-runs as the model does not climb very rapidly and when the engine cuts, the nose drops sharply before picking up the glide. The Flycatcher has proved to be a consistent flier and on one occasion, 10 consecutive flights were made with motor runs of up to 45 secs. There are many sports models that cannot claim a performance of that order!" 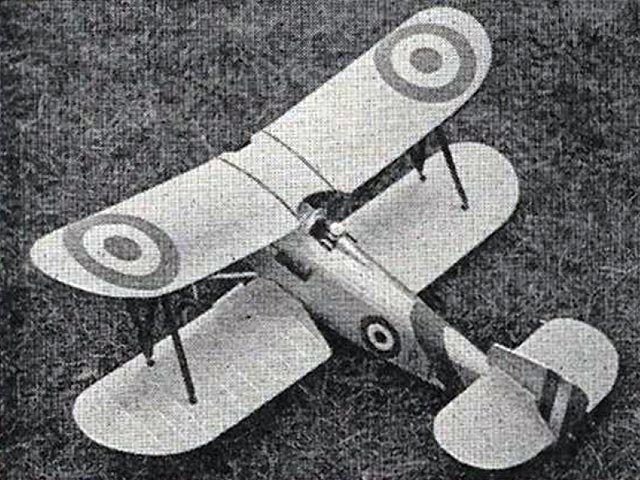 I built two of these and neither flew. Total absence of directional stability, even when I doubled the rudder area. I met a chap who built one and his didn't fly. He was a clubmate of Stan Perry and Stan's didn't fly either!
bill dennis - 09/10/2019
That's a pity. May I suggest replacing the plan fin & rudder with one made of transparent plastic sheet of a larger size that will allow the model to fly properly? Start with an exaggerated area and gradually trim it until satisfied, and then paint in the tail feathers in the correct size.
Miguel - 09/10/2019
Add a comment