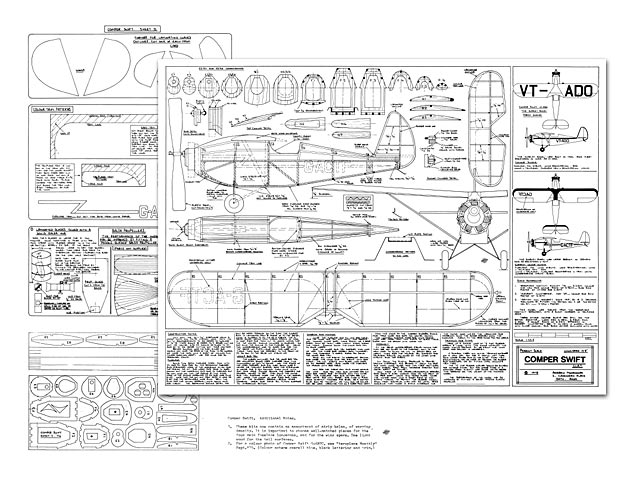 Quote: "This model was scaled from the Aeroplane Monthly drawings, with a slight increase in tailplane area (Aeroplane Monthly: August 1974. 3 view, colour side views and colour photo of G-ACTF. Also BW photos of VT-ADO and G-ACTF)."

Finally it arrived and I have been totally hooked on scale models ever since. The white box with a black and white photograph of Andrew’s prototype on it was eye catching, inside the smell of the fantastic balsa wood was overpowering. I had never seen real balsawood - my dad built control line models, enough said.

The plans together with some red and white jap tissue, were so tightly rolled up that it was a struggle to unwind them for fear of ripping both.

On carefully unwinding I was struck by miles of tiny writing as if written by Elves, who lived in a word of real balsa wood and great aromas. On reading these little words my life changed, they gave a detailed understandable step by step guide on building a P-nut that would fly. Those tiny words told me how to make a propeller, how to cover in tissue, how to put the decoration on, how to make a dummy engine and how to trim it. If you have never seen one of Andrew’s P-nut plans, then you may not understand how tiny the writing is, all hand done, fantastic (I now wear glasses!).

The instructions were so good that I built it and flew it on my local football pitch and my best time was 20 seconds, euphoria does not do justice to the elation I felt at my success. The plans also had all the formers and ribs drawn out so that I could build another and another. Each one was better than the last and Nottingham Model Club was having indoor meetings at Chilwell Olympia Sports Centre on a Sunday afternoon. I was able to get my Comper Swifts to do 47 seconds from a take-off, with no dihedral either, the real one had none. I seem to have been doomed to like aircraft with not much dihedral ever since. So all this made Andrew Moorhouse a bit of a celebrity to me (not like the ones who are on telly).

At some time in the Seventies I talked my Mum and Dad to take me to the Indoor Nationals which were local at Derby, where I flew my second Swift all day in between contests (flown by real Aeromodellers, not me then).

Unbeknown to me Andrew Moorhouse came and stood next to me and watched my burnt offering circling doing it’s 40 second flight. I had painted it cream and blue as G-ABUU, complete with spats and a naff pilot. He complimented me on my model’s flying. I ran off to tell my Mum! Those kind words from Andrew pushed me into a low earth orbit, spurred me on to fantastic model designing, building and crashing and to employment within Aerospace Engineering. What a bargain, £1.30 and a few kind words!

I still have a couple of his kits that I have not got around to building, a Comper Swift and a Luton Minor, I still look over them once or twice a year, unroll the plans and squint at the writing. They still generate the same feelings I had before I was a teenager, pure inspiration. I also still have the remains of Comper Swift number three, just to remind me of the journey I am still on. If I see Andrew at a meeting I make sure I shake his hand and thank him for what he has given me, he must think I’m a nutter. If I see a youngster trying to fly a model I will always offer my help or kind words because I know this sort of thing can have legs that can last a life time." 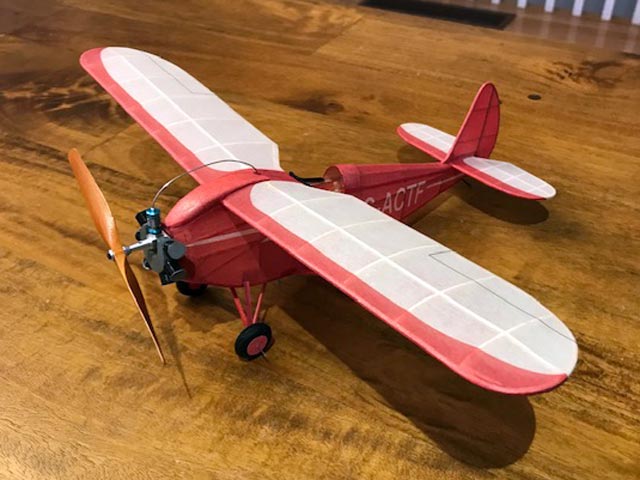 Here is another kit scan: Comper Swift, (The Scarlet Angel). I see Andrew Moorhouse did a lot of Co2 but this one is rubber. This really is a beautiful little kit. The detailed plans are very interesting, giving two colour schemes and two ways of making wooden props. There is an excellent article about this kit on the Impington Model Aeroplane Club site www.impmac.co.uk, September 2016 news letter [see supplementary file].
NicholasTucker - 23/05/2017
Hi, any chance this one can be made downloadable? Looks like a great plan!
Lindsay Pucholt - 07/12/2019
All of the plans are downloadable, Lindsay. See here for more help: https://outerzone.co.uk/faq.asp#downloadplans
SteveWMD - 07/12/2019
Thanks for making this plan printable now! It looks like a good little flyer.
Lindsay Pucholt - 17/12/2019
Some photos of the finished model [modelpic, more pics 003]
Lindsay Pucholt - 24/02/2020
A lovely Scarlet Angel, Lyndsay. Well done!
Nicholas Tucker - 24/02/2020
Second set of pics is the Comper Swift [pics 006-008], a peanut design from Andrew Moorhouse, again scaled up by 50%. Many thanks for the great work you do with Outerzone.
PeteS - 01/09/2020
Attached pic of a recent build from the Andrew Moorhouse peanut plan [pic 009].
Adrian Culf - 31/03/2021
Add a comment