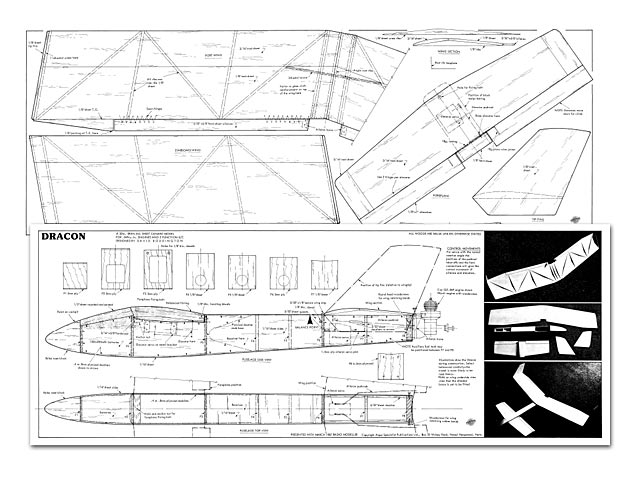 Quote: "Canards fascinated me and somewhat terrified me at the same time! I knew that models could be made to fly the 'Wright' way round but could you really get away with a CG position in front of the wing? In the end, of course, you find yourself doodling out a design just to see whether the theory is backed up by practice. My first effort was of modest dimensions, designed for a Cox .049 reed valve engine (they will run in either direction) and utilising all balsa sheet construction with a Jedelsky type wing. Fortunately, my son Andrew (he was keen on modelling then - he's discovered women since!) took a fancy to the doodle and put it into three dimensional form.

The wing was originally designed to have only chordwise ribs but, as the wing seemed over-flexible, cross ribs were also added, Construction is certainly simple - no point in going mad for a design that was definitely in the realms of fantasy. First flights were approached, particularly in view of the sceptical expressions of fellow club members, with some trepidation. As it happened, it was almost an anti-climax, the 'Dracon' went away as if it didn't realise that it was a back-to-front baby! Control response movements were smooth and positive, and the little canard had a fair turn of speed. Indeed, the only problem encountered was in relation to the wing construction. Adding the cross ribs certainly stiffened the structure but it also seemed to have the effect of allowing the stresses to be routed to the wing centre; as we had not fitted dihedral braces or reinforced the centre joint (it was literally a butt joint), the inevitable happened. The clean break was quickly repaired and some nylon applied over the centre joint and the Dracon was on its way again. Do remember to reinforce the centre section; I would suggest some lightweight glass cloth and resin.

If you have built any sheet balsa models then this one should not present any difficulties. It is about as basic as you can get with an RC model despite its unusual configuration..."

Hi Steve, Here is the next one off the pile, a "Boddo" design from 1987. The plan was clean and unused, so I took it, (and a couple of others) to the nice girls at Officeworks. It just needed a cleanup of the folding creases. I checked the formers, they are all within "pencil line" tolerance. Cheers. 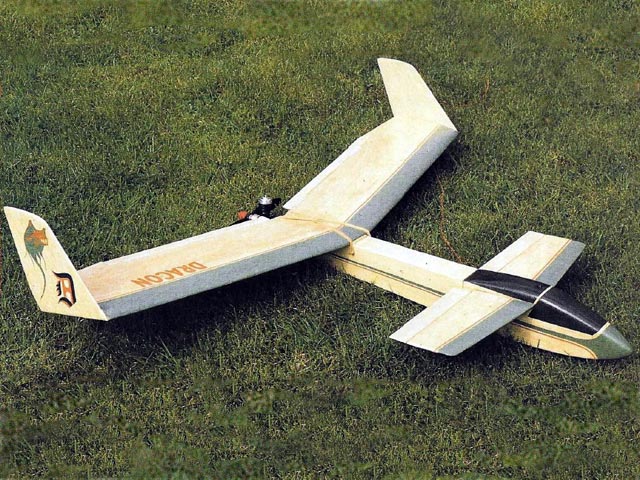