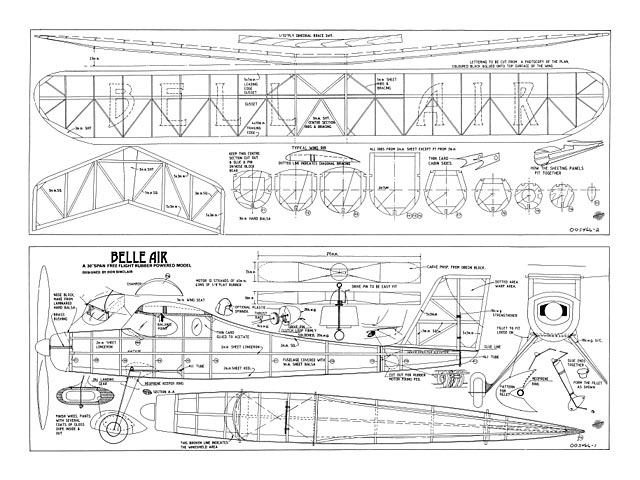 Quote: "This model has served me well, through several rubber motors and breaks with only minor damage. Sadly I have now lost both the prototype and the final version. The latter model, as per plan, made a last flight of the day with max turns on an old motor, the prop was a shop plastic affair. The climb was vertical to the low cloud base, flattening out and circling in wide right hand circles till it was a dot. Like a good champagne bottle it was non-returnable.

Fuselage: Cover the plan with cling-film to protect it. Bulkhead F1 is 3mm hard balsa and the rest are all 2mm. Note F4, F5 and F6 are identical. Cut 6mm strips and pin carefully over the plan. Fit them all dry first making the outer profile accurate when you trim. Leaving the pins in, swing open each join, glue and close the join again. F9 is a balsa/ply/balsa/balsa sandwich and accommodates the motor peg as shown. F1O is again 2mm sheet and F11 is a soft balsa fairing.

When all the bulkheads are dry carefully mark the datum line and cut out the longeron slots with a very sharp blade. Cut the longerons out from 2mm sheet balsa. Assemble the bulkheads onto the keel bearing in mind that the bulkheads must be vertical on a slopiing keel; follow the drawing. The two side longerons are the next stage and they need a notch at each station, from Fl to F10. The upper surface of this longeron is the datum. Assemble the three longerons dry first and work out how you can block it up to hold it accurately. Now glue in the two side pieces and the keel with a slow setting glue. Double check everything is true and leave to set hard.

Make two cabin longerons following the top view of the plan, from F1 to F6. Cut notches in the pieces where they fit in the bulkheads, glue and press them home leaving them flush with the bulkhead shape. The short piece from F3 to F3A is not obvious from the drawing but it follows the area shape from bulkhead to the dotted line; this is a support for F3A. From the trailing edge of the wing at F6 down to Fll two stringers are of 2mm square section glued into the bulkhead slots. Cut a scrap piece to fill in the area between the two datum longerons and F10 and Fll to form a platform for the tailplane. The cabin top is 3mm sheet with an angle cut and glued to seat the wing and give 3 degrees incidence. At the front and rear of the platform there are 2mm dowels for the rubber bands.

There are two fixings for the landing gear at the lower part of the fuselage. Two balsa cheeks either side between F3 and F4 are make from scrap block and follow the outer shape. Glue generously and make a hole either side for a 3mm dowel 75mm long. This is for the rubber band or neoprene ring to secure the undercarriage whilst the rear location point is a metal tube spanning the bulkhead width and secured by two gussets.

Now it is ready to be covered in 1/32nd sheet. This is done in six pieces and a sketch on the plan shows the disposition of the pieces. Make a stiff paper pattern of each piece by pinning it to the model and working from the straight horizontal datum. Bend the card round the model and mark inside where it meets the keel or longeron as appropriate..." 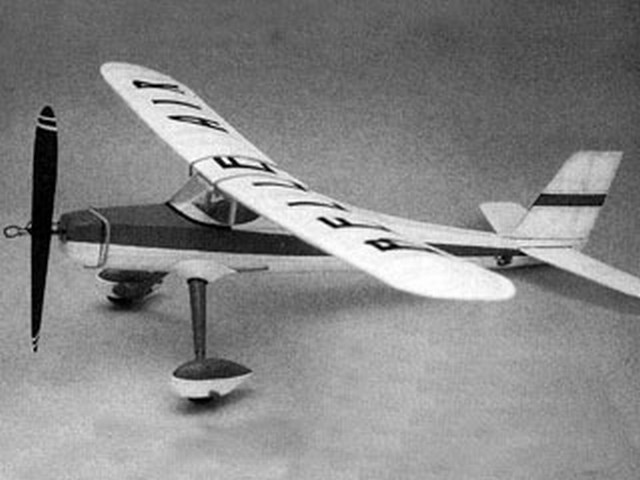