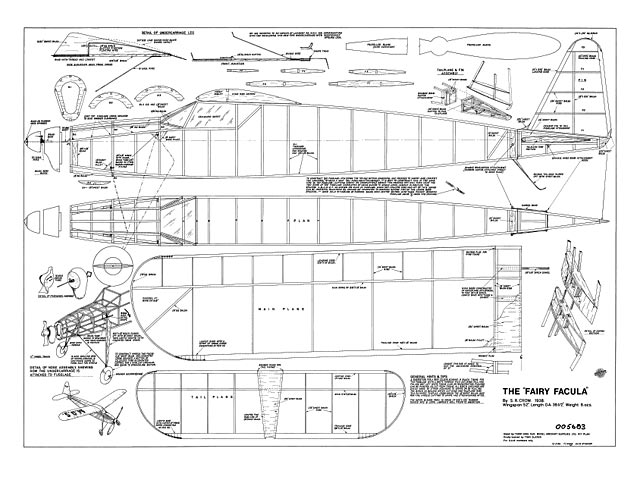 Quote: "The kit contains ample supplies of first-class materials, and everything necessary to complete the model. The fuselage is constructed of good hard 1/8 in balsa, the rear portion of which is later cut adrift for easier transport. Two interesting features are the cabin and the domed formers at the front of the cabin, which give the model a realistic scale effect and certainly help the appearance of the model tremendously.

Being of 52 in span, the wings are neatly split in the centre, so that they can be divided for easy transport. They have a chord of 7 in, and are very strongly built. Leading edge is 3/16 x 1/4 in balsa, main spars 3/16 x 1/8 in balsa, and the trailing edge 3/8 x 1/8 in. The ribs and riblets are ready cut, of constant chord, and made of 1/16 in sheet. The fin and tail 'plane are also strongly constructed.

The undercarriage is detachable, and is made with 18 s.w.g. with birch and balsa fairings - the wire so arranged that it recoils through the birch slot at the back of the fairing and takes all landing stock. This is a very ingenious device and quite simple to assemble. The finished model is very strong, 8 oz in weight, and powered with 12 yards of 3/16 in rubber... " 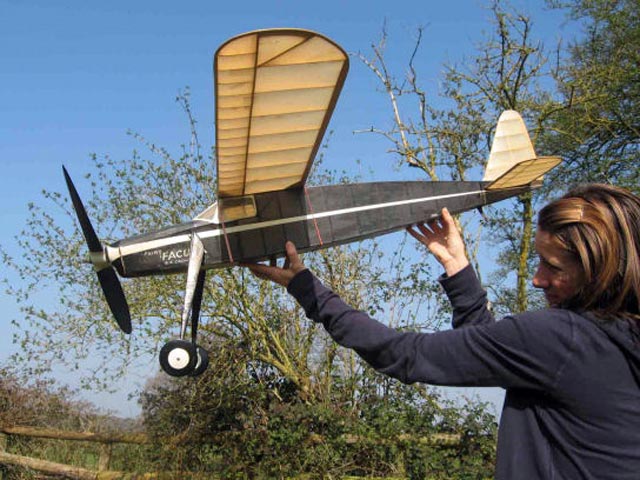 Photo of completed Fairy Facula was found online (thanks Gerrit) at http://www.simonpg.com/bmfc/crow2.htm
SteveWMD - 16/05/2017
Added interesting 'On Test' article from Aeromodeller August 1939, thanks to alcalaino [suppl. file & more pics 003, 004]. A model so easy to make, even a young lady can build it all by herself! ;) I especially like that Miss Mason added spots to the wings to match her dress.
Mary - 23/03/2018
Add a comment