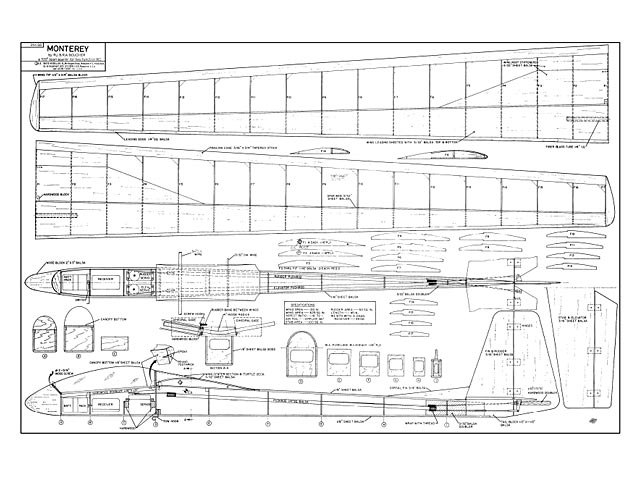 Quote: "First of a series of glider designs from abroad - this highly efficient design by the Boucher brothers is presented in RM by arrangement with the American RCM.

THE design of the Monterey started out in the fall of 1969, when Bob built a set of 100 inch span plywood wings for his Malibu (oz10393). This Super-Malibu included ailerons, which were later removed since they were rather ineffective. Although the sheet plywood wing proved much too heavy for general flying, the glide ratio was great and many times he had the ship climbing during consecutive loops at Hughes Hill in Culver City, California.

Variations of this design using all-balsa sheet construction, a la Malibu, were built and successfully flown in various contests in Southern California. With the advent of the AMA provisional rules, and the very successful LSF Contest in August 1970, it was proven that a main. span aircraft could compete with the monsters in thermal contest. The successful 76 in Malthus and Peregrines had already shown that smaller models could be extremely successful in pylon racing. Further design refinements were made to maximise the ship's performance in thermal Class A events.

In all, about 8 variations of the Monterey were built by members of the Soaring Associates AMA Club at Culver City, California. Those contributing to the design include Tom Mead, Eddie Phillips and Dan Horwood, as well as the authors. The general specifications were :

1. Total wing and stabiliser area less than 750 sq in.
2. Wing span 100 in, two piece wing (to fit in small automobiles).
3. Fuselage length no more than 44 in for same reason.
4. Weight to be minimised, and a goal of 32 oz looked reasonable.
5. Two channel radio equipment.
6. A minimum sink speed of 1 ft/sec to achieve a 3 min still air time.
7. A L/D as close to the Cirrus as possible.
8. All balsa sheet - easy contruction at modest cost.

In summation, we wanted a competitive model under LSF and AMA Class A rules that was easy to build, easy to fly, and would fit in a Porsche 912!

Wing design. The Monterey wing is constructed with a tapered D spar supporting bending loads for most of the span and a transition to a fully sheeted wing at the centre section to take out launch and landing axial loads. The transition in the centre sheet was designed to keep skin stress at a maximum of 60% of the bulking limit at a wing loading of 17 pounds (1/4 in dia Hi-start max tension). The method of fuselage attachment is by a single 0.19 dia steel rod at 25% chord with a 3/32 in dia aft pin to provide incidence alignment..." 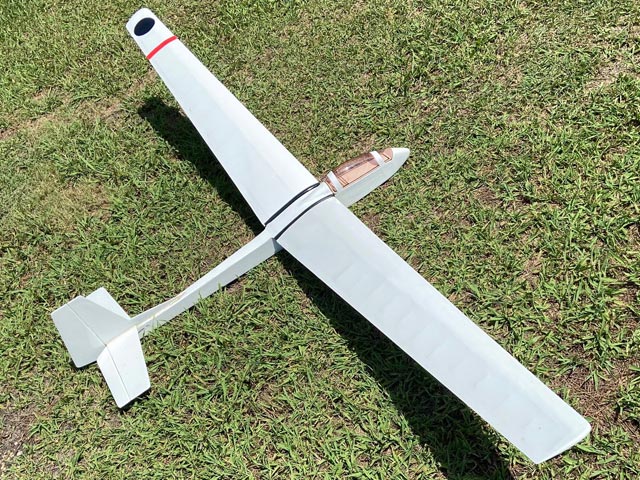 Hi, I was surprised to find this on the web. Here is a photo of me with my Monterey in 1975 [pic 006] launching for 2nd place in the Malverns Cross Country Event - won by the legendary Dave Hughes. The model still exists in my loft, having been largely destroyed by a failed receiver battery which wound the elevators to fully down :(
Regards,
Roger Middleton - 28/01/2021
Some Monterey pics [main pic, 008-012].
Erich Schloemer - 01/07/2021
Add a comment