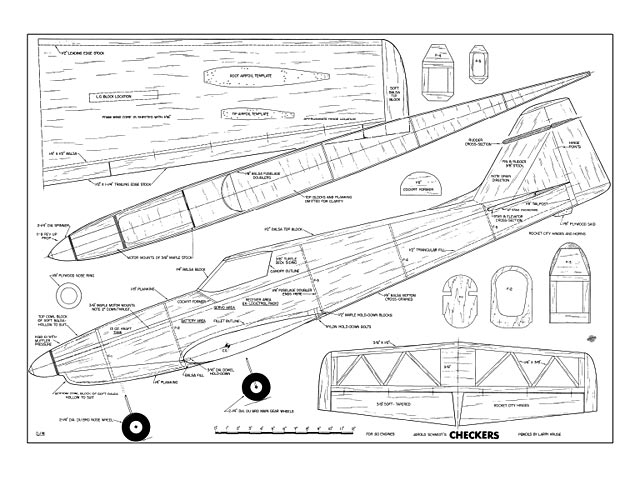 There's a very obvious kind of teamwork evident in all types of model flying, whether we consider Free-Flight, Controline or R/C. The flyer and his plane must be a matched pair. Many times, particularly early in a modeler's development, the air-craft he selects will have more potential than he has ability. That observation, however, is usually subject to change, and, as the modeler gains experience and improves his skills, he will be able to fully utilize the built-in potential of his ship.

It is at this point that a type of leap-frog effect takes place. In order to continue to advance, the modeler must have a better plane, or at least a plane more suited to his abilities - one that will help him compensate for any weaknesses he may have begun to develop, a design that will emphasize his strengths.

Checkers was designed by Jarold Schmidt to fill just such a void in his own develop-ment as an R/C pattern flyer. Jarold wanted a plane that was both competitive and easy to handle, with good landing capability. The design has a large lateral fuselage area for sustaining knife-edge flight, a generous fin and rudder for stall turns, a wing and stabilizer planform set up for good stability, and plenty of room to install retracts, if desired. As an added bonus, Checkers does not need to be powered with a super-hot Schneurle in order to groove through the pattern. The prototype had a K&B .61 in it, and subsequent editions have had Mercos and other non-racing engines installed with good success.

Construction: The fuselages on later versions of Checkers have been done in fiberglass, which is probably the easiest and most durable way
to go, over the long haul. A plug can be made using dimensions shown on the side and top views of the plan. If balsa is your bag, though, begin by cutting out the fuselage sides of 1/8 medium hard balsa and laying up 1/8 doublers. Use Titebond for this procedure. Cut the nose ring and all bulkheads out of the wood prescribed on the plans and set the fuselage sides together. Make sure all bulkheads are epoxied in place squarely and the fuselage is pulled together at the 1/8 x 1/2 in tailpost in the rear without bowing to one side. A good way of maintain-ing alignment is to draw a center reference line on your work board and place the fuselage over that line, clamping the sides to the bulkheads until the epoxy cures.

You have a choice of using the maple motor mounts as shown, or omitting them and opting for a radial mount such as a Kraft-Hayes, if you prefer. In either case, there should be 2° of down thrust in reference to the fuselage centerline. The nose blocks should be tack glued in place and shaped after all superstructure planking is completed. The top portion of the fuselage ahead of the cockpit area is planked..." 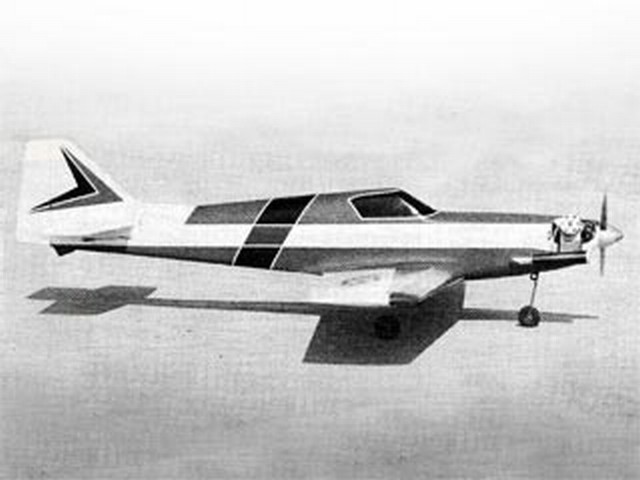