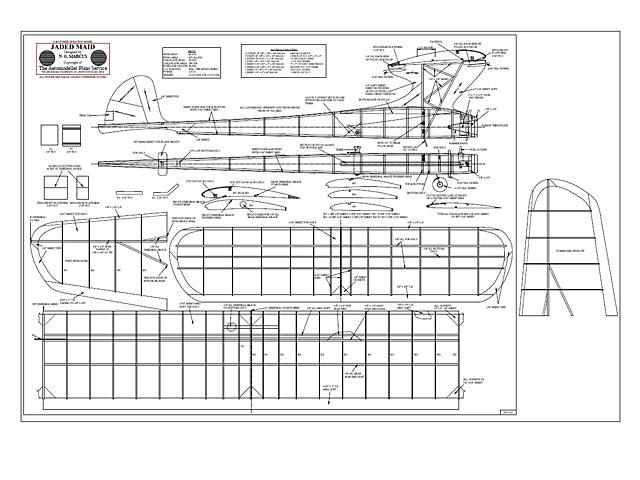 Few models can boast the list of contest successes that Norman Marcus' Jaded Maid amassed during the 1950 season. Often an outstanding design will eclipse others in perhaps two of the many major annual contests, but the 'Maid' outflew its rivals to win no less than five firsts in one season.

The Maid was developed from the 1948 Firecracker (oz2265) plus an outside influence from Frank Ehling's Super Phoenix (oz2080) via several unsuccessful to mediocre power jobs during 1949, the last of which placed 3rd at Brentford. and Chiswick Gala, and 2nd at Radlett, 1949. The flying surfaces have been increased in area and the weight reduced as compared to 'Firecracker' hence, the wing loading is very low - so low in fact, that the 'Maid' tends to stall in high winds, and seemingly flies backwards when gliding into a strong wind. The designer feels the performance might be made more consistent with an increase in weight—up to 17-3/4 ounces, which is the required FAI power loading weight. The original is definitely on the flappy side, the wing tips vibrate about 1/2in with the motor running, and the extra weight could he well used in strengthening the structure, especially the pylon.

It will be seen from the plan that it is of a fragile nature, and if the builder has any doubts about the strength, it is suggested that he reinforces the structure where considered necessary. For guidance as to the weakest members, the fuselage has withstood two vertical dives, whereas the pylon has broken just by turning over in a rough landing. The wing structure is reasonably rigid, but a stronger leasding edge (say 3/16 x 3/8) would be advantageous..."

Quote: "published in the May 1951 Aeromodeller. She is a FAI pylon contest free flight plane designed by Norman Marcus and with her he had a string of contest wins during the 1950 flying season. The story of his path to success is quite interesting reading, especially his exploits at the Northern Heights Gala. Also this is one article where the designer advocates adding weight, strange but true. As normal with my tracings please measure and check before cutting." 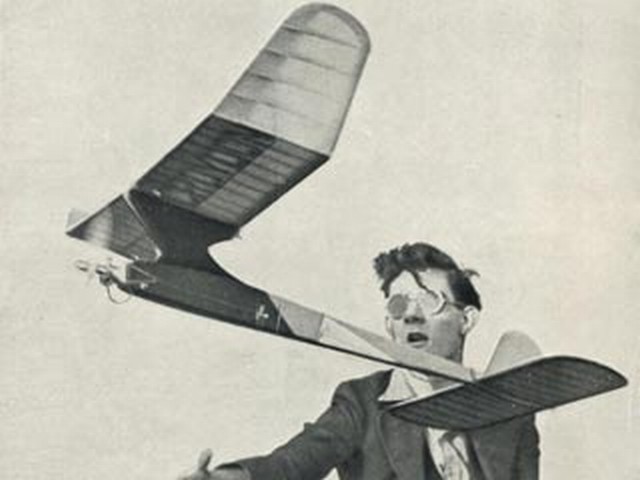