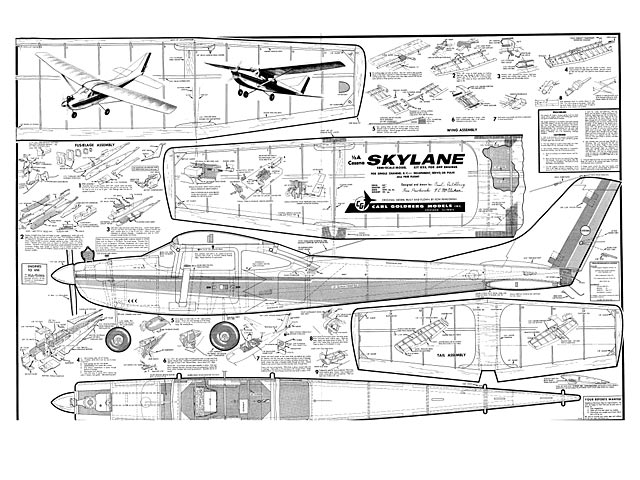 Cessna Skylane. Scale RC gas model, for .049 motors. This plan is incomplete, has no formers, no printwood. 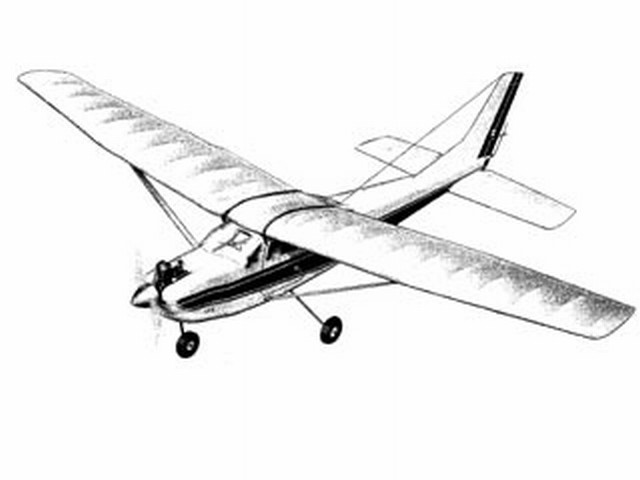 I used this set of plans to construct the $42 short kit sold at http://lazer-works.com The plans printed out perfectly and I've attached a picture of the results [see more pics 003]. Here is the build thread if it's useful http://www.rcgroups.com/forums/showthread.php?t=2016289 Many thanks for your efforts which I'm sure were considerable.
Nick - 27/02/2014
I had the exact same Controlaire Mule transmitter shown in the pic, which I earned by making some catalog drawings for Jack Sabine, used in his plastics business. The Mule (a real kick) had a truly beautiful engine turned aluminum case, coated with clear lacquer for protection. Unfortunately, the humid conditions in LA (that's Lower Alabama) were too much for the coating, and corrosion ate the aluminum surface, creeping under that clear coating. It still worked fine, corrosion and all, but the matching receiver, one of the early superhets, didn't fare so well. It was sensitive to vibration induced noise from any metal-to-metal contact. A metal clevis on the throttle crashed three airplanes before I discovered the cause. At that time, plastic fittings were not available, so I made a clevis from an old toothbrush and my problems were solved. It wasn't until MANY years later with the advent of 2.4 radios that the noise problem was really eliminated. I did have lots of good flights with the Mule as long as the model used an escapement but no throttle. It paid its own way by using cheaper batteries. The Mule required one large 9 volt dry battery instead of the two 67-1/2 volt shockers my previous tube-type transmitter needed. They cost $8.00 each and they didn't last long, but the Mule would run all Summer. Sixteen bucks doesn't seem like much now but it was a lot for me back then. To give you an example, the next year ('66) I bought a new Datsun off the showroom floor for $1830, a lot nicer car than the VW I was driving, took me three years to pay it off. The Datsun had a heater that actually worked, made a pretty good aircraft carrier too, with a good sized trunk that didn't smell like gasoline.
DougSmith - 11/06/2017
Hi friends, this is my 1964 Carl Goldberg Cessna 182 Skylane from Outerzone's plan [more pics 004-008]. It is a great model, he flies beautifully. Without landing gear (hand launch) he weighs 645 gr. Cox Black Widow 0,049 from 1995 bought new last year. I love this model. RC version, 3 channels, monokote covering. Best wishes from Córdoba!
GustavoRuiz_Argentina - 31/05/2020
Hello Oz, Here are some pics of my latest build, a half-size capacitor free flight replica of a Goldberg 1/2A Cessna Skylane, (OZ868). Constructed of EPS foam from recycled meat trays, it's decorated with felt tip markers in the original box-top scheme [pics 009-011]. Power is an 8520 coreless DC motor, 65mm prop and two 10 Farad caps in parallel. Wingspan is 21 inches, weight is 1.41 oz. Test flights await a break in the snowstorm conditions currently prevailing here. Cheers! Mike Sousa (YouTube sonex413)
Mike Sousa - 29/01/2021
Add a comment