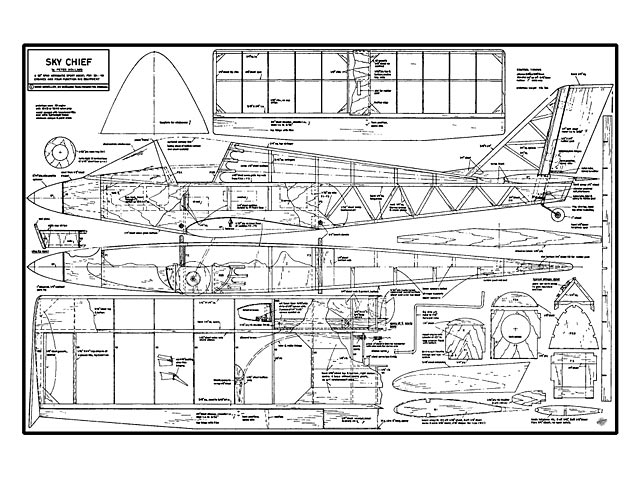 Quote: "Nostalgia is rather an infectious frame of mind, and one which I was in when I conjueed up this little 'light aircraft' type model, from the days when fullsize home-builts were more like models - and models were made from sticks and oiled silk. Sky Chief is no oldie itself though, as new trends in design and outline have been included in this 52 in span sportster, which began in late 1973.

The resultant creation has I feel the atmosphere of a modern light aircraft - and a sprightly aerobatic capability to go with it - yet as it purrs past on finals with the evening sun shining through all that fabric, you're back in the good old days- call it 'neo-Shuttleworth' if you like, but you'll be hooked.

This is a light machine, but don't get the impression that it's a 'flimsy whimsy.' The only wood is in the places where wood should be, and it is stressed for all the 'G' you need to pull for good natural flying in its aetobatic range. In terms of pounds-G this need not be much when you realise that the all-up weight is 4 lb or under.

Practical proof of this was to be seen during one test-flying session, when Co-Ed Norman Butcher, feeling the need to exercise his thumbs (it helps with the golf grip!) and seeing the model in the air, asked to have a go. After comments like: Look - no hands, and (holding the transmitter aloft in one hand) he proceeded to throw Sky Chief all over the sky. It was clear to me that he was blissfully unaware that the model was not made with half-inch spruce and quarter-inch ply in places where it might hurt! After this, I decided that its estimated 'G' capability was on the conservative side.

Design. Apart from lightness, the intention was to have a fairly low aspect-ratio machine without too much tip loss, plus a large tailplane to reduce pitch touchiness, and a long nose for positive directional stability. The side area near the nose, so helpful in steep banks, is provided by a huge sloping windshield, yet the frontal area is small and a clean nose entry is preserved. Aesthetically clean, too, Sky Chief has its motor mounted at an angle..." 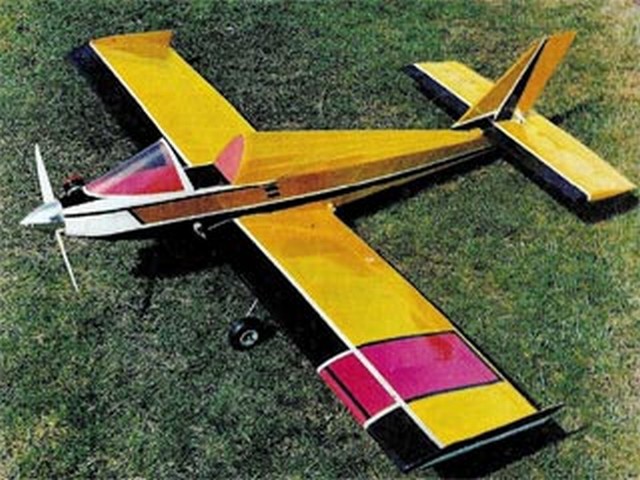