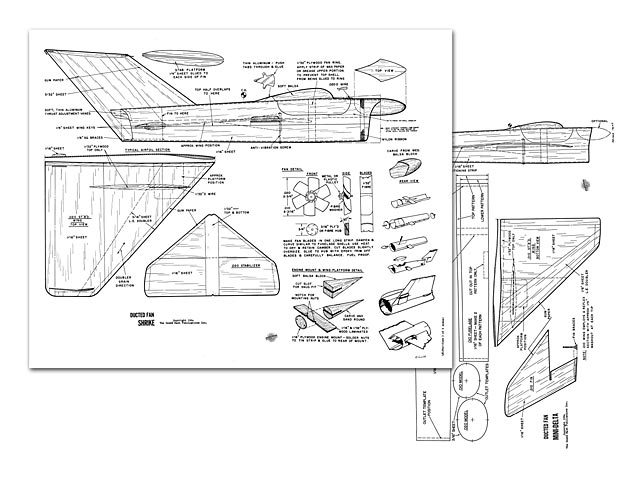 Shrike. (Shrike and Mini-Delta). Ducted fan design. This is actually two plans: the 21 in Ducted Fan Shrike, and the smaller 16in Ducted Fan Mini-Delta.

For more than a decade, Percival Edward ('PE') Norman of Banstead, England, successfully built and flew F/F and R/C scale and semi-scale ducted-fan models. The story of his extensive DF experiments (March '62 AM) and the feature on his Rapier DF (oz6996) R/C (June '62 AM) attracted so much reader interest, we sent 'PE' samples of the little Cox .010 and .020 engines and asked him to develop simple all-sheet-balsa designs for readers who wanted to try out DF flying for the first time.

Finally, after various delays due to sickness, poor model flying weather on
both sides of the Atlantic and shipping damage to the original models PE sent over to America for our testing, here are the .020 Shrike of 21 in span and the .010 Mini-Delta of 16 in span, two of the best DF designs yet flown. Both are semi-scale in appearance and feature rugged, light airframes, with knock-off-flying surfaces.

Since building methods are similar, we'll concentrate on the Shrike construction in detail and give only brief notes on the .010 Mini-Delta. Use epoxy-resin glue throughout and, unless otherwise specified, select only fairly light-weight balsa.

WING TONGUE PLATFORM/ ENGINE MOUNT: Glue together pieces of 1/32 and 1/16 plywood, with grain running lengthwise, to form wing tongue platform (use 1/16 plywood alone for .010 model). Cut out 1/16 plywood engine mount, using back of engine tank as a pattern. Drill bolt holes in mount and in 1/4 wide thin tin strip and solder nuts to latter, which is then glued behind mount.

Cut a 2-25/32 in dia disc from 1/16 plywood (2-7/32 dia for .010 model) and carefully drill to fit engine shaft. Make fan-ring from 1/2 wide strip of 1/32 plywood (use 7/16 width for .010 model), soaking in warm water and wrapping around circumference of disc as tightly as possible (allowing 2 in surplus and marking this overlap in pencil). Chamfer overlapping ends of plywood strip and glue ends together to form fan-ring, with plywood disc inside to hold true, and using several rubber bands eround circumference until dry. Take off fan-ring and clean with sand-paper and then replace on disc.

Streamline front and rear edges of that portion of wing tongue platform located inside fuselage, on either side of engine fairing cone. Bolt engine to mount and coyer all openings with masking tape, for sawdust protection.

FAN: See drawings for details of this item, which must be made accurately and then carefully balanced. Cut the six blades from a long strip of 9/16 wide 1/32 thick fiber (1/2 width for .010 model). Cutting the fan blade slots in the hub at the correct pitch angle is simplified if a small jig is made, such as the type described and illustrated in Rapier DF feature in June '62 AM.

FUSELAGE: Using 3 wide sheet that bends easily across its width, cut four fuselage shell pieces to the patterns shown. Join each pair edge-to-edge (flat on building board) along straight edges (center line) and when dry, reinforce joint with 3/s wide strips of medium-weight brown wrapping paper, cemented or doped in place. Pencil in center line on both sides of each of the two sheet assemblies, and also mark fan-ring loca-tion on inner faces. Cut a 23/4 dia front inlet template (2-9/32 dia for .010 model) and rear outlet template to pattern given, from 3/16 sheet.

Take sheet assembly for lower shell and run hot water over both sides, until soft and pliable. Shake off surplus water and place fan-ring (with plywood disc inside) in position. Hold sheet to curve of fan-ring with rubber bands and loop more bands at intervals along the sheet..." 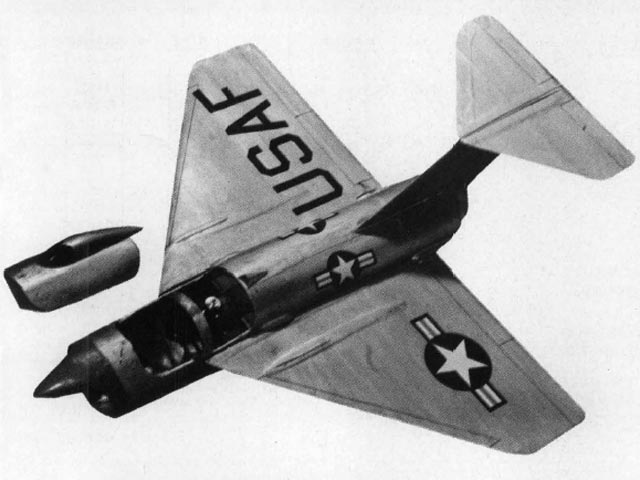 Reading the article, it seems the design should be credited to P. E. Norman?
hjsaxe - 23/01/2022
I'll buy that. Probably the credit to Bill Dean applied to writing the article. Ok, have set the designer on this one as PE Norman now. Thanks.
SteveWMD - 23/01/2022
Add a comment