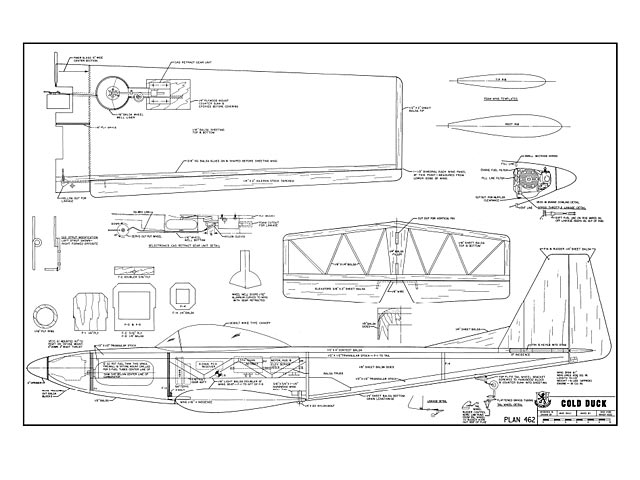 Cold Duck is a sport pattern design, conceived to take full advantage of retract gear. I have tried to keep the fuselage as streamlined as possible, without sacrificing space for the radio gear and engine.

The fuselage is simple in design, and easy to construct. The fuselage is built of contest balsa, and is constructed to fly, not be resistant to crash. I could never understand why a modeler would give up performance, for the allowance of crashes. In most cases, if you beef up one area, it will just break somewhere else. So, why not just build it to fly? The wing, is the well proven 18%-15% symmetrical taper. With the gear up, the aircraft is very clean, and flies fast, and smoothly. It will do the most beautiful slow roll. This is a result of clean lines, and having that dirty old landing gear out of the way. As far as the rest of the maneuvers, the Cold Duck handles them like an old pro.

The retract unit is Selectronics CAS gear. This gear, of excellent design, is the answer to a reliable landing gear system. The struts in the original units were removed and modified legs formed to incorporate a spring coil as shown on plans. These legs can be ordered from tne, for $3.95, which includes a set of right and left mains, postage included. The retract gear, on the Cold Duck, is actuated by a modified 180 degree S4A servo. The servo has a separate power supply, and is actuated by a double-pole, double-throw, slide switch. The slide switch is moved by a fifth channel servo, that giving a segregated system for the landing gear. The latter can be actuated directly from the fifth channel servo without undo strain. If by some bizarre accident, the landing gear was to jam, the airborne power supply could be discharged, and the result would be loud sobbing noises and tears. I have never had a landing gear jam (yet), but I have worked out a system where it is only necessary to carry two to three Nickel Cadmium cells, depending upon the servos used.

The schematic shows circuitry for two different servos, and includes transis-tors used as diodes to prevent feedback from one limit switch to another. The schematic design eliminates the need of a center-tapped power supply. This system could be used with the RMK gear servo, or with other servos which have limit switches. The gear could also be activated pneumatically, which has been used in my area. Of course, this is another article in itself. The foam wing used on this aircraft can be cut from the templates on the plans or can be purchased for $7.50, from Howard Engineering, 12316 Third Avenue N.E., Seattle, Washing-ton. Phone EM 4-9354. Howard Engineering is the originator of many fine fiberglass kits.

Construction. Fuselage. Start construction by drawing a straight line down the center of a lightweight 1,4. x 4 x 36 inch balsa fuselage back. Cut out formers F1, F2, F3, and F4, marking a center line on the top edge of each former. Epoxy former Fl and glue the other formers on their proper stations on the center line..." 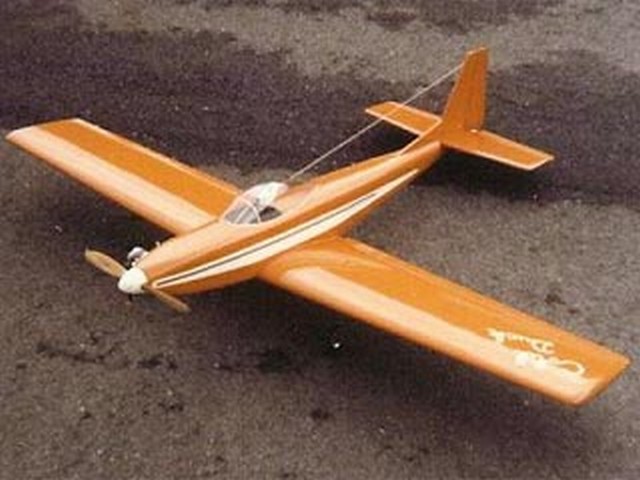 Thanks for keeping the memory of these old designs alive. In 2005 I did an update to my original Cold Duck design and published a build thread on RCU at https://www.rcuniverse.com/forum/classic-rc-pattern-flying-379/3092876-cold-duck-build.html
Mike Dailey - 01/11/2020
Add a comment