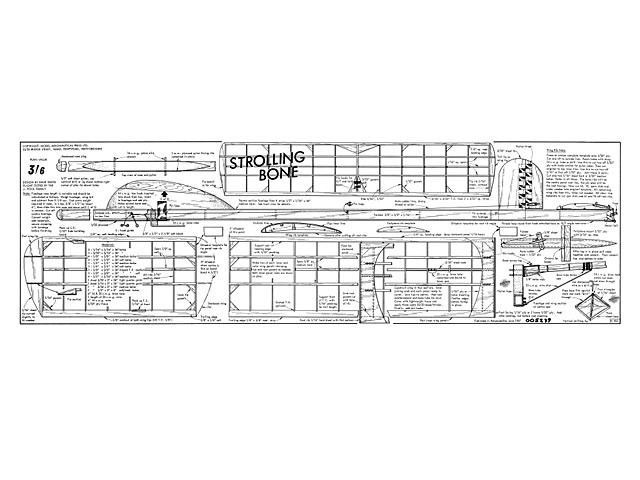 Quote: "An A/1 specification glider of 50 inch wing-span. Simple construction and two piece wings are just two of many fine features in this model for contest beginners. Strolling Bone, by Dave White

ORIGINALLY designed at the specific request of John Pool for a simple glider suitable for his eldest son Robert, this model proved to be so successful that his younger brother David made one and even Dad followed suit! It is the designer's opinion that there is no point in building a model that is only suitable for sports flying and it was decided that the most effective size 'beginners' contest model would be an A/1. This type of model is of course equally suitable for general club and sports flying.

Once the size had been established the model was made as tough as possible bearing in mind the fact that the all up weight of an A/1 is low and that this doesn't give the same scope in construction technique as one gets with an A/2.

One advantage inherent in the lightweight model is that on rough landings or hitting obstructions it will 'bounce' rather than break. The idea of a two piece wing even on such a small model is well worth the extra effort involved as the 'Quickie' type bracing is very strong on tow and gives the wing some give in rough landings. Additionally it makes it very portable - RAFMAA members please note! With a normal type wing, if the model is towed at a speed beyond the safety point, the wing usually snaps. This excess of speed in towing is a common failing with newcomers to glider flying and you should aim to keep the model safely on the line whilst towing as slow as possible. If you do exceed the limit with the Strolling Bone or if a strong gust of wind does the job for you there is every chance that the wings will fold upwards and either slide them-selves off the keying dowels or even snap the dowel off. This is certainly preferable to a snapped wing. Robert ended up like this on several occasions, without any major damage, before he became more proficient.

Constructionally the model is basically very simple but great care should be taken to build the flying surfaces without undesirable warps. The designer builds in a strict order ie wings, tail, then cover, shrink and dope these before starting the fuselage. This gives more time to allow the surfaces to set, which is what counts most. Many experienced modellers allow at least a month for doping and dope will tighten tissue for at least a fortnight after application. The lighter the structure, the worse the problem becomes, so be careful.

Use reasonably light wood throughout paying par-ticular attention to lightness in the rear of the fuselage, tailplane and wing tips. This keeps the greater mass of weight around the CG and therefore improves stability and overall performance..." 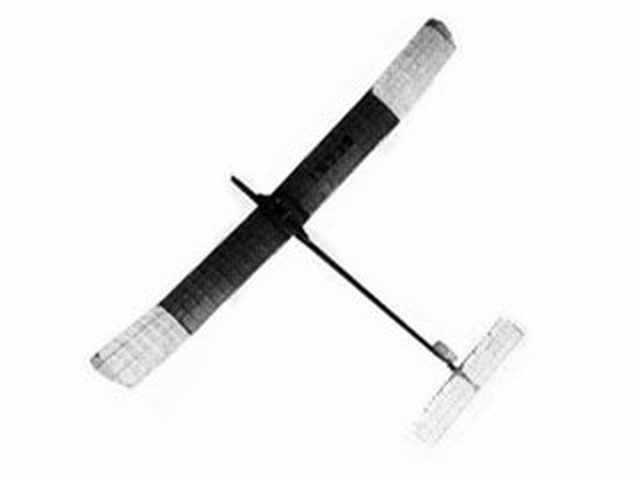