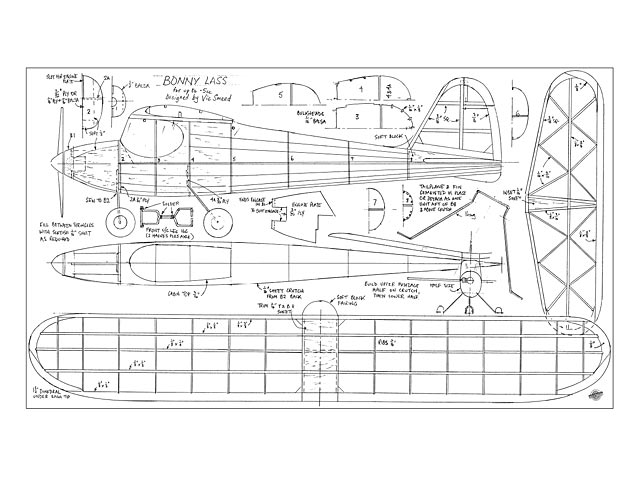 Quote: "The increasing interest in smaller engines has created a demand for plans for small models, of which there are very few available. Some modellers are able to scale down larger designs, but there are many who lack the confidence to try this approach and prefer to work from ready drawn plans or even kits. Such kits as exist are mostly of American origin (for 1/2A engines) and are not easily found; they are imported, but usually have to be bought unseen, by post from the importers. Available plans are generally of simple slab-sided 'tail dragger' models, so there would appear to be scope for something a little more sophisticated - a thought reinforced by the number of Mam'selle models to be seen at meetings nowadays.

The family resemblance to Mam'selle (oz44) is obvious but his new design Bonnie Lass is smaller, has a tricycle underarriage and has a novel form of fuselage construction. The name, incidentally, follows on from Likely Lass, published last year in MF, representing a move north to Geordieland (linguistically!) where it is common usage when addressing or describing a pretty girl (this explanation is for the benefit of overseas readers!).

Advantages of little models such as this include less outlay in both time and money, convenience in building board sizes and transport of the completed model and the ability to fly from smaller fields. However, small models travel downwind just as fast as big models and can be more difficult to find - something to be remembered when considering length of motor run or flying in breezy conditions.

The prototype model has a good glide and builders should be careful if flying without a DT. Probably a pop-up wing would be easier to arrange than a pop-up tail, using either a fuse of a Tomy toy mechanism conversion, but from experience, most people flying this sort of model go for relatively short flights..." 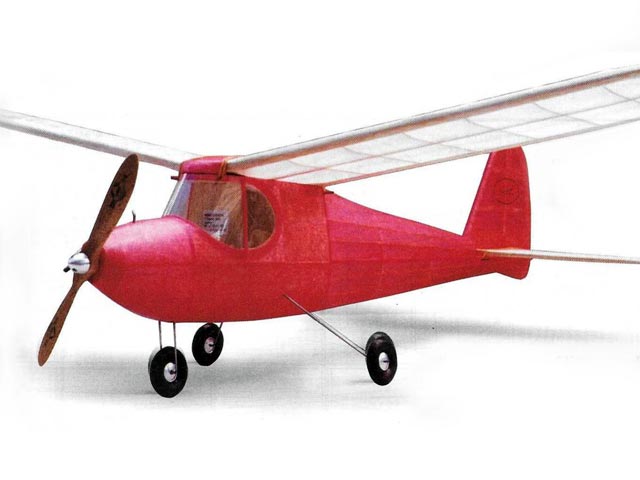