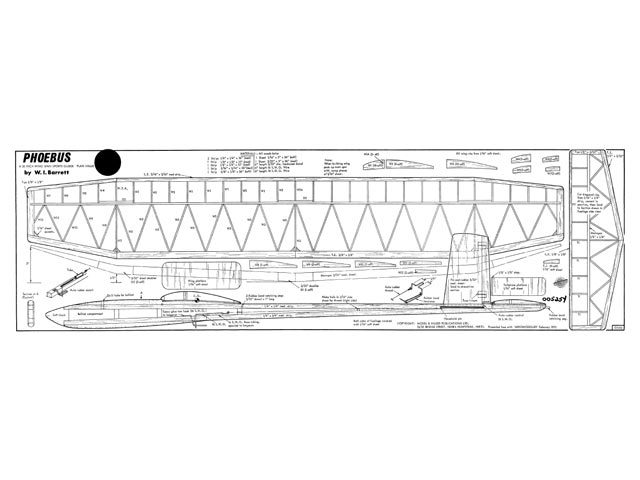 Quote: "THIS MODEL was originally designed to meet the requirements of a competition in the writer's club, which is predominantly interested in control-line and radio flying, Due to field limitations, the competition limited the span to a maximurn of 30 inches and a tow line length of 50 feet. As a free flight scramble was also on the competition calendar, it was logical that the same design should do for both competi-tions. The requirements therefore came down to a tough, small model with easy trimming and a con-sistent performance.

The construction was made simple in an attempt to attract some of the 'bricks on string' brigade to try their hand at free-flight.

Fuselage construction starts with the pinning of two strips of moderately hard, springy, 1/4 in square balsa to the plan, and fitting in between the spacers. By careful cutting, two 36 in lengths are sufficient for the whole fuselage. When the basic structure is dry, lift it from the plan, and add one fuselage side from 1/16 sheet. Install the auto rudder mechanism, and lead the nylon operating line through a piece of plastic tubing let into the fuselage side. The other fuselage side can now be attached, and the whole unit sanded to shape. Make the fin and rudder assembly, and cement into a slot cut into the top of the fuselage. The wing and tailplane mounting platforms can now be added. Note that the wing mount should be slightly angled up on either side, to suit the dihedral angle of the wing.

The wings are designed to be stiff in bending and torsion, and construction, though simple, is slightly different from normal practice. The full depth mainspar is first cut out, and then pinned to the plan (one wing section at a time) with scrap pieces of 1/16 packing under every position where the ribs meet the spar. The leading and trailing edges are pinned flat on the plan. The forward rib halves are added first, followed by the rear, diagonal ribs. The latter should have the trailing portion cut slightly over-length, the excess being trimmed off when the rib is positioned in the wing.

The tips are built in a similar fashion, except that the spar is packed up 1/16 in at the dihedral break, and lies flat on the plan at the tip, because the undercamber reduces to zero at the tip. This has the effect of building in slight 'wash-out' at the tips. Add the dihedral keepers, and sand the leading edges to the section shown..." 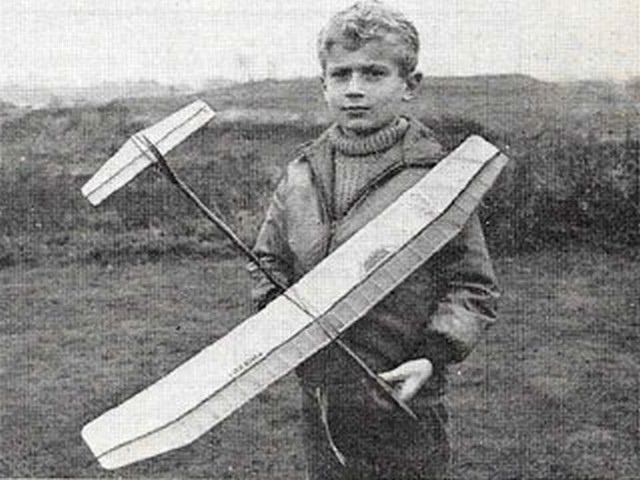 Built one of these the day the issue of Aeromodeller came out. It was finished by the weekend and flown then, it was three days from start to flight. I was attracted by the intricate wing design. As it said in the article, it was trimmed to just prevent stalling and the auto offset rudder took it well below the threshold. I flew it with a 100M towline and achieved some remarkably long flights.
RichMc - 05/05/2017
Add a comment