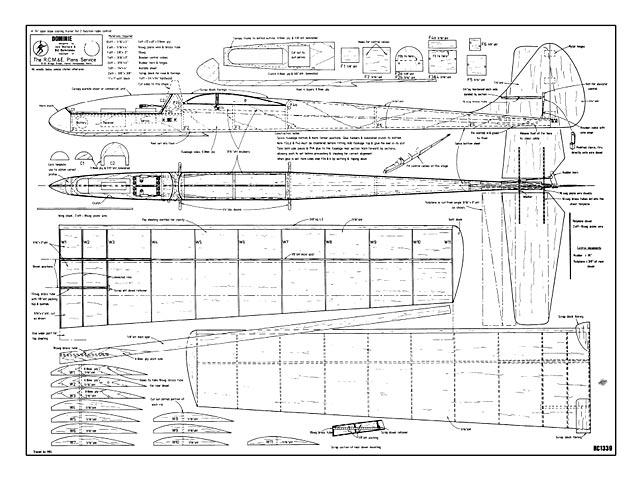 Quote: "RUMOURS spread very rapidly in our Editorial offices and news of the advent of project Dominie was no exception. Every experienced R/C modeller has his or her own ideas on the desirable features that a trainer should incorporate and MAP's modellers are no exception. Advice poured in from every quarter - including visitors to the offices who cast their critical eyes over the outlines that slowly evolved on the office drawing board. A brief resume of the design parameters that Dominic had to fulfil are outlined below:

1. Forgiving flight characteristics. A trainer must possess a large degree of inherent stability with no unpredictable tendencies.
2. Easy construction. It is assumed that the builder of the model might well be a novice builder as well as a novice flyer.
3. High strength-to-weight ratio. It is to be expected that the novice will have several heavy landings, even out-and-out crashes, before he learns to fly well. A trainer must survive these.
4. Readily available parts and materials. It should not be necessary to purchase non-standard items or items only available from a single source.
5. Attractive appearance. Many novices are instantly attracted to unsuitable models by virtue of their appearance. A trainer should be as attractive as the demands of simplicity and ruggedness allow.

With the above points in mind, design commenced with the wings. Whilst parallel chord wings seemed at first to offer the simplest solution, memories of the excellent 'Equi-angular' wing sections designed by Bob Annenberg prompted the consideration ofa tapered wing. Using only one such template it is simplicity itself to cut out an aecurate set of ribs for a tapered wing. For speed of construction an all sheeted wing was decided upon. At this point, cost of construction was queried but a quick estimate indicated that an all sheet balsa wing could be built for about £3.00 (uncovered) so design of the wings proceeded. With a wing span of 74 in (2 panels from 36 in sheet balsa, plus 1 in tip blocks) and an average chord of 8 in results in a wing area of almost precisely 600 sq in. A rapid calculation revealed that if a complete sheet of 3 in wide 36 in long balsa was used to shape the tailplane, an 18% tail area would result. This coupled with a moment of just over twice the wing chord, would provide more than adequate stability.

Wing design and tailplane size and position thus decided their positions were drawn onto the paper and a fuselage outline to couple the whole together sketched in. Tailplane position caused much heart searching, the final high tail layout decided upon provides adequate ground clearance on landing plus the solid fixing needed to avoid constant changes of trim caused by poorly located rubber banded attachment. Some would query the all moving tail layout but an examination of this design will reveal the absolute simplicity of operation. No horns, no bellcranks, just simple direct linkage.

Plywood 0.8 mm thick was selected for the fuselage sides. The veneers that make up plywood are bonded together so that their grains lie at 900 to one another. This makes the ply very resistant to splitting, a major failure of natural timbers such as balsa. Whilst it is possible to reinforce balsa sheet fuselage sides with doublers and cross-braces the plywood sides have simplicity, if not weight, in their favour. A 3/16 sheet balsa top and bottom is used for the fuselage and a ply/balsa composite crutch is used at the nose to carry the servos as well as form the nose taper. All parts that would often be plywood of over 1.5 mm in other designs, are of a ply/balsa laminate. There are none of the difficulties associated with cutting out complicated thick plywood shapes, all plywood parts can be easily cut with a sharp modelling knife.

Wing Construction: Mark two 4 in x 1/16 in sheets of balsa to the angled cut lines indicated on the plan. Cut these using a straight edge and sharp knife. Sellotape together four sets of wing skins each comprising two sheets of 3 x 36 x 1/16 in balsa and one of the tapered pieces. Sellotape should only be applied to one side of the joint at this stage. Using the Sellotape as a hinge, bend back each joint, apply PVA glue then close and Sellotape the joint. Lay the four completed skins to one side on a flat surface to dry. It may be necessary to trim the long edges of the 36 in sheets with the aid of a straight edge to achieve a close joint.

Transfer the wing rib template shape to either thick card or scrap plywood by pricking through the plan with a pin, or using carbon paper. Cut out a complete set of ribs including the 0.8mm ply doubler ribs..." 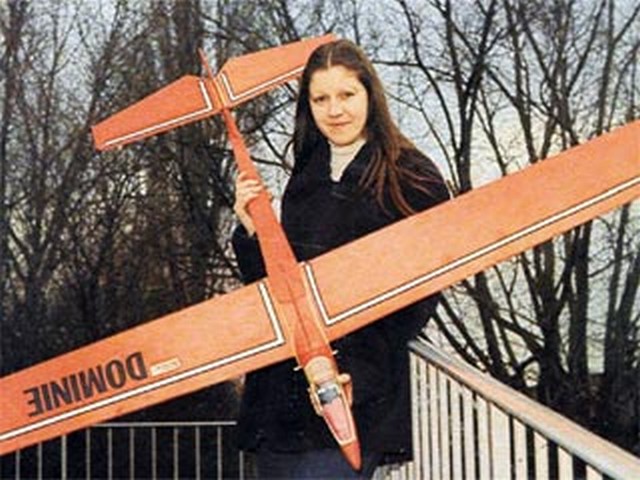