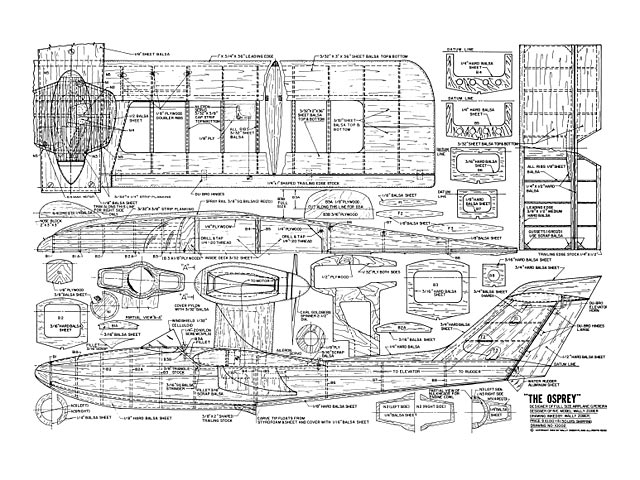 Quote: "For a change of pace, try some scale modeling on the wet and wild side. Osprey II, by Wally Zober.

If you live on Long Island and fly R/C airplanes, you are eventually going to get involved in R/C seaplane flying. On this big narrow sand bar, called Long Island, we have some of the greatest lakes. In the middle of Long Island, we have Lake Ronkonkoma. It has about eighty or ninety acres of fresh water for seaplane operations. A few miles east, we have Artist Lake which is about fifty acres of fresh water; but is predominantly used by R/C boat-ers. Out at the east end south fork we have Watermill Pond, which is well over 100 acres of fresh water. Now, if you are not afraid of flying off salt water, which I do occasionally, you will find dozens of bays and quiet inlets along the coast.

Eighteen years ago, I started the first AMA sanctioned R/C seaplane contest at Watermill Pond. It was a great hit and has been successful for the past eighteen years. After about nine years, I moved the contest westward to Lake Ronkonkoma to make it easier for out of town contestants to get to. I've been flying seaplanes for many years using floats on Pattern ships, Quickie 500s, fun-type aircraft, etc. I always wanted a flying boat. They seem to handle better on the water and in the air. Two good example of these types of flying boats are Henry Struck's Sea Kat (oz304), and Don McGovern's Custom Privateer (oz278). The only thing I found wrong with these airplanes was that they were not scale. I'm at that stage in my model building life where I want my models to look like real airplanes.

One day I was going through some old magazines. I came across the 1970 Fall issue of Sport Flying magazine, and on the cover was a picture of a single seat pusher type flying boat, the 'Osprey I.' It looked just like an R/C model airplane taking off of a pond. The designer, George Pereira, had the same motivation I had to build a flying boat. The capitol city of California is situated in a large central river basin of the state at the junction of two major waterways, the American and Sacramento Rivers, which head downstream to San Francisco Bay Delta country. There are a maze of sloughs, ponds, creeks and calm rivers - just right for seaplane flying. That's George Pereira's country, and the birthplace of the Osprey.

Well, I wrote a check out for the information package. Two weeks la-ter my package arrived. I opened it and found all the information I needed to design a sport scale model of this flying boat. I cleaned off my drafting board and started laying out the Osprey I.

After the plans were drawn up, I ran off some prints and began cut-ting out parts. It took me about two months to build and finish the model (I'm a slow builder). The model looked great and I was quite pleased at the way it turned out. Now the proof of the pudding is in the tast-ing, and the proof of a good design is how it performs. Well! I made arrangements for the test flight.

I selected Watermill Pond as the place for the first flight and I bor-rowed a boat for retrieving. I asked my flying buddy, Sal Izzo, to give me a hand. He's our local expert for tuning model engines. We got out to Watermill Pond at 10:00 am Saturday morning. I took all the static pictures I needed, Sal made some final adjustments on the Webra .40, and we were ready to go!

The Osprey I came in a little on the heavy side (8-1/2 lbs) with 693 sq inches of wing area. I knew it would fly, but would it get off the water? If I were to say this airplane flew perfectly on the first flight, that would be untrue, as I ran into the same problem that the real airplane had. In the water it handled beautifully; however, in the air it had a tendency to porpoise. At full throttle the nose would pitch down and, at low throttle, the tail would drop. Also, my Webra Black Head .40 engine was new and not broken in as yet, and it was not putting out the way it should. Osprey was flying on the back side of the power curve and was a bit hard to handle.

While it was in the air, I let my friend Tom fly it and he stalled it on a downwind turn. The model went into a spin and dove into the water (minor damage). Water can be forgiving! I took the plane home, made the necessary repairs and added more positive incidence to the engine. This helped to dampen the porpoising effect; however, you have to set this airplane up slightly differently for takeoff, straight flight and landing. You can do this with the trim tabs. On takeoff use full up trim, then straight and level flight at cruise speed have neutral trim, while landing requires three-quarters of the down trim. Now, if you have an emergency situation where you have to go around and must hit full throttle, then be ready to add up trim. If you don't, you may have a hairy moment or two.

CONSTRUCTION: For those of you who have never scratchbuilt a model from plans, I have a suggestion for you. Kit the model first. That is, cut out all of the wing ribs, bulkheads, slab sides, etc. When you have done this, you can start building the model. I have a good reason for doing this. If you are like me and you are not too crazy about cutting out parts, you will want to get it over with quickly. Also, I find that, once I start building and gluing parts together and see my airplane beginning to take shape, I don't want to stop and start cutting out detail parts. It's like you stopped the production line. I also believe this is why so many modelers have so many partially completed models hanging on their cellar walls that are only partially completed.

Once you have all the detail parts cut out and neatly stacked on your uncluttered work bench, the plans spread out, pinned down and covered with wax paper, you are ready to go. Now there is nothing that can stop you from completing the proj-ect. So let's get started.

One thing more, I don't believe in giving step-by-step instructions as this article would be too long, and you would get bored reading it. If this project is going to be your first step into model building, I suggest you buy this plan and put it in a good dry place for a future date, then go out and buy a good R/C trainer kit. This will give you a chance to learn how to read a construction drawing, how to match up and identify parts which are called out on the drawing. You will also know that all of the building bugs have been worked out of the model. When you are working on prototypes, a new design, or developing a kit or building from plans, a mistake, a construction procedure or a slight change in the design may occur. This does not happen all the time; but every now and then a designer who is deeply wrapped up in his project may omit something. An experienced scratchbuilder will have no problem working around this type of situation..." 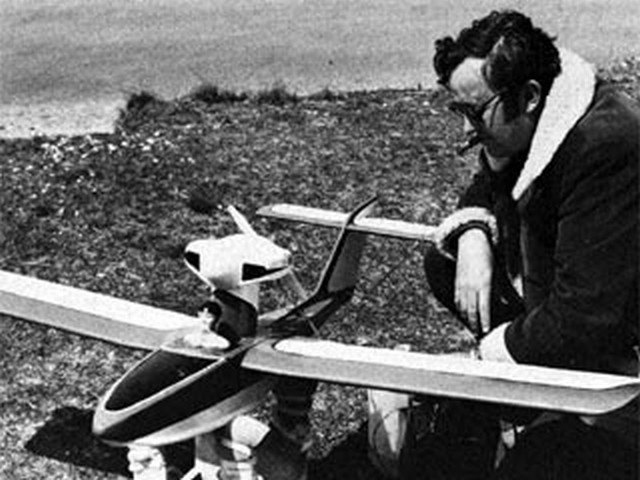