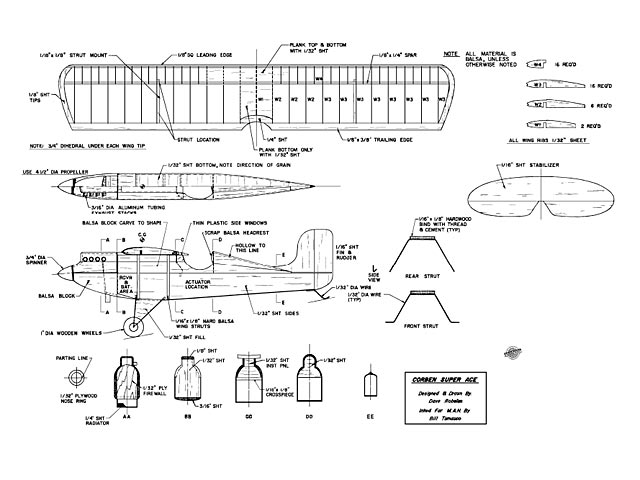 Quote: "According to Dave, subminiaturization is no excuse for skipping instrument detailing. Our T-tail Kestrel (oz3719) glider designer must build in a closet, his planes are all matchbox scale. This tiny Corben is two-for-one in that it has been proven to be a fine FF scale as well as a satisfying little pulse rudder-only R/C flyer. Ten years ago, what R/Cer would believe it. Mini-Corben Super Ace, by Dave Robelen.

DURING THE glamorous 1930s, a gentleman named OG Corben was producing aircaft for the home-built aircaft enthusiasts. Among his victories was an airplane that today is almost forgotten by history; the lovely 'Super Ace'. Using a converted Ford automobile engine for power, this sleek beauty was apparently an effort to achieve maximum perfomance from that powerplant. The model presented here is an attempt to blend scale realism from the foregoing prototype with miniature radio control equipment and current 'state of the art' practices to achieve a realistic R/C model for fly-ing in very limited areas and on a snug budget.

The airplane in this article is definitely not true to scale in every respect; however, the overall effect is very pleasing. One of the design goals was a realistic flying speed. This was achieved by keeping the weight to a minimum, and as a result, the model may be flown easily at 12 - 15 mph for a remarkable effect. The all-up weight of my model is 2-3/4 ounces (no, that's not a misprint! R/C Ed) and would seem to be a good figure to work towards.

Something that was not expected was the terrific performance of the Super Ace as a rudder-only model. Much to my surprise, it actually outperforms most of my non-scale sport models, and certainly is the best scale type design I have flown. In fact, my model had been flown free flight before I installed the radio equipment, and did quite well in this role also. If smooth pavement is available , the model will ROG with ease, and land-ings are a pure pleasure to behold.

In laying out the prototype model, the choice of engines was quite limited; in fact, the Tee Dee .010 is the only suitable power plant available in the USA. This engine is far too powerful in its standard form for a model of this size; however, an exhaust restrictor such as the one manufactured by Carl Vogt in Wisconsin will tame it down to the exact level of power desired. The inverted engine has caused me no problem whatsoever - I rotated the powerhead 180° on the fuel tank and mounted it in the usual way. Starting is normal in all respects. To prevent flooding, I hold the model nose up perhaps 30° after filling the fuel tank. It almost goes without saying that the best practices of cleanliness should be observed, (filtered fuel, regular cleansing of the engine, etc).

It is more difficult to remove the engine for servicing fiorn this model because of the cowling arrangement, so keep a constant lookout for dirt. It was by coincidence that I discovered a hypo-dermic syringe was the best way to fill the concealed fuel tank, and it also allows you to observe the condition of the fuel. The Cox 4-1/2 in diameter, 2 in pitch nylon propeller is a good match for this model, and it aids hand starting. Because of the slim cowling I did not install the starting spring; however, with the large prop, hand starting is fine.

The choice of radio control equipment for a model as tiny as this one is definitely limited. The total weight of the air-bone equipment installed in the model should be no greater than 3/4 ounce. At the time of this writing there are two receivers on the market, the Albin from ACE R/C and an imported German unit carried by Polk's and custom built by Helmar Bentert. Both of these are super-regenerative, although the Bentert unit has a tone filter which limits-interference in active areas. However, it does require a special high tone (3400 cps) transmitter. At this writing the Bentert actuator is the most useful because of the low weight, but tiny actuators suitable for this purpose may be readily available in the hobby shops by the time you read this. Hobby Lobby Internationals Micro-Prop I or IA might be just the thing where superhet is all that is allowed.

By far, the best dry cell is the Eveready s76c hearing aid battery. These cells have a voltage of 1.5 each, are light in weight, and are widely available wherever hearing aid batteries are sold. I average 25-30 flights per pair with a Bentert type actuator, which has approximately an 80 ohm winding. Although I have not previously mentioned it, the foregoing equipment is all pulse proportional and will require a suitable pulsing type single channel transmitter. There are several excellent units available; check the advertisements to compare features and characteristics.

I will not give detailed information on the equipment installation because of the possibility of different equipment becoming available by the time this material reaches print. My model does have a torque rod rudder drive, with the actuator mounted beneath the scale pilot's seat. The receiver and batteries are mounted in a plastic sponge block just behind the first fuselage bulkhead. Access to the actuator is through the cockpit. while I reach the other components via a removable hatch beneath the landing gear. This hatch, and the cowling top as well, are spot cemented in place with a very fuel proof cement (Pactra C-77 or similar). If you feel inclined toward a fancy hold-down system, be my guest.

The model is constructed in rather an ordinary manner; however the fuselage may seem a little different. The entire top half of the fuselage, and also the nose forward of the first bulkhead, are carved from light weight block balsa and hollowed to a thin wall. This was the easiest way for me, what with the fancy curves and all. It has worked out very well on the original model, and I recommend it highly. The fuselage should be tackled in the following sequence..." 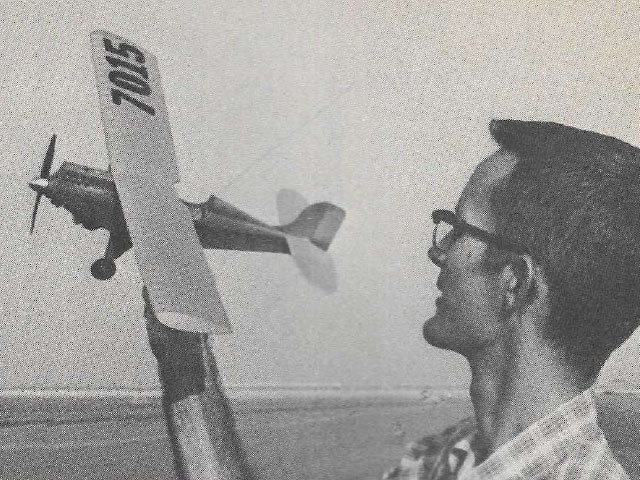