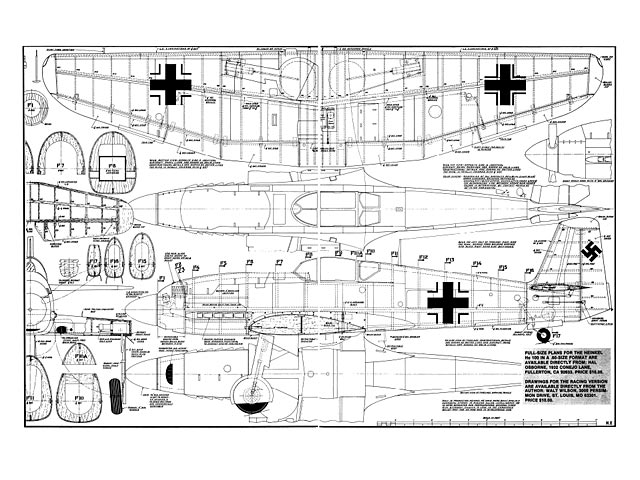 Quote: "The He 100 D-l modeled carries the "hat and dagger" crest, and number 21. I selected this particular subject because there is an excellent color three-view in Aero Publications No. 12 Heinkel 100, 112. That publication also has an outstanding 1/72-scale five-view drawing, showing all panel lines and additional details. I scaled up my working drawings the easy way, by making viewgraphs (overhead transparencies) and projecting them on a wall. After some "squaring up" and adjustment of the projector to eliminate the "keystone effect," I traced the outline on vellum. Of course, I established the size of the model ahead of i time, so it was just a matter of moving the projector to the correct distance from the wall, until the projected image was the proper size.

I originally designed the model to meet the 1980 Warbirds Unlimited rules, which require a minimum of 450 square inches of wing area for a .40 (1981 rules required 425 for scratchbuilt aircraft). I decided on a .40 because of the highly developed state of the art of .40 size pylon racing engines and propellers. Besides, I happened to have a good running K&B 6.5 cc front valve engine with a Perry pumper which meets all of the requirements.

The engine is mounted horizontally for a couple of reasons. The cylinder could be entirely enclosed in the upright position, but cooling would be a real problem. If adequate air holes were provided, there would be almost no forward angle from which the nose would look like the real aircraft. Also, getting the rear exhaust out would be a serious problem involving more holes. As it is, from almost any angle on the left side, there is no evidence of a model engine. On the right side, the exhaust port is really not offensive. The carburetor is enclosed, except for an air intake and a needle valve hole, and the only real giveaway is the cylinder head.
The plans from Hal Osborne are enlarged from my original drawings, for a .60 engine. Hal has taken the trouble of changing some of the scale details, such as the nose area, to more accurately adhere to existing documentation data. This will make this larger-scale Heinkel more competitive in standard scale contests."

Note there are no wing ribs shown on this plan. Also there is some central banding. 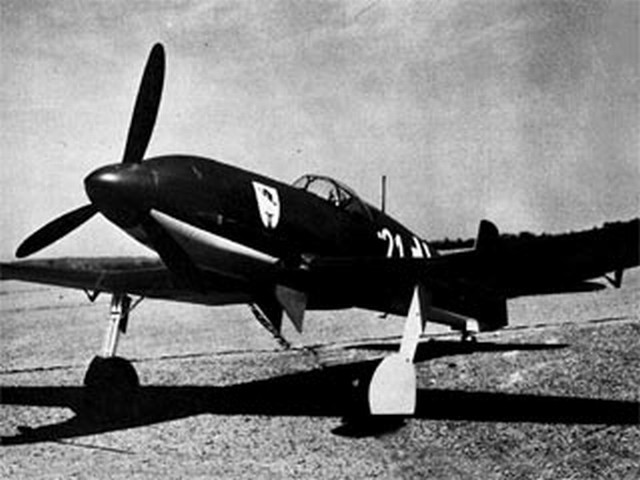