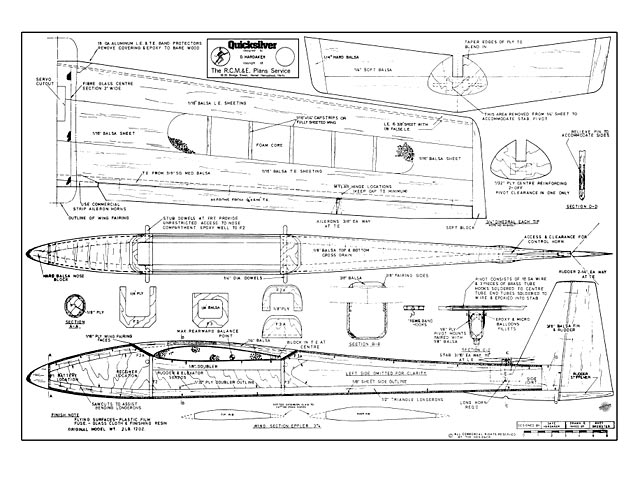 Quote: "Quicksilver first flew some four years ago following a succession of attempts to design a glider that handled more like a powered aircraft. Well, if you haven't already guessed, there ain't no such thing, and the best attempts are always a compromise.

I don't like symmetrical sections for gliders, the calm weather performance suffers in the attempt to achieve equal upright/inverted or inside/ outside acrobatic handling. Maybe flaps and such things help if one pursues the symmetrical layout, but for a fun model these can be just another nuisance - making the model less crash-resistant. (Of course you're going to!).

To cut a long story short, I chose the EPPLER 374 section, as it was the 'in thing' and still is. The rest of the model is an accumulation of practical ideas used on various other gliders I have built previously. The combination works extremely well and I feel sure that if something better had come along, then the slopes around these parts would be covered in those rather than Quicksilver.

Quicksilver has no known vices even though the swept wing has no washout. It flies well in the lightest wind or our usual gales (our flying sites are all in the Yorkshire moors). My original weighed 2lbs, although numerous others have been made to lighter weights and will do most manoeuvres well - but need aileron differential to perform axial rolls. Outside loops are possible, though as you may expect, the wing section does not work as efficiently when inverted, so extra airspeed for inverted manoeuvres is necessary for good performance.

Construction is very straightforward. I usually work to the following sequence:

Fuselage: Make the basic fuselage sides to the outline marked on the plan, using fairly stiff balsa for obvious reasons. Any sheet joints are best made with a PVA glue and the roots held together with sellotape along the joint. Next make the ply doublers - fit these using contact glue. To complete the side add the triangular section balsa along the top and bottom edges, Whilst the sides are drying, make up F2 and F3 formers. Before joining the sides to the formers mark their positions on the sides and also put a centre line mark on the formers. Next, trim the triangular section balsa at the tail-end to allow for the taper to the rudder-post.

I prefer to fit the F2 and F3 formers first and let this stage set before pulling in the nose and tail; a fuselage jig is of course the answer to these time-wasting stages. Check the chamfering at the rear end before finally gluing together. After the sides are joined, complete all top and bottom sheeting with the grain of the wood across the fuselage..."

Update 29/07/2019: Replaced the article with essentially the same file, except this version now includes the illustration of the plan drawing, as printed in the pages of RCME in 1978, thanks to RFJ. 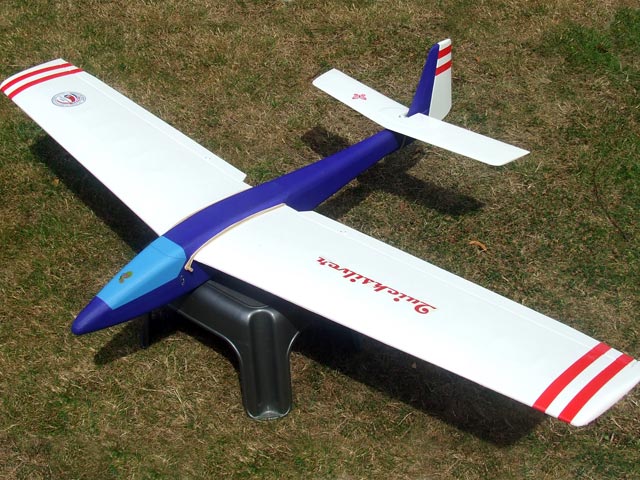 The plan shown here is not the original that went with the article as it does not show the built up wing. The recently reprinted free plan from RCM&E does show the built up wing.
Martin Hodgson - 26/07/2019
Dave's ORIGINAL Quicksilver had one of "Stu's special foam wings" (E374), clearly shown and annotated on his original dyeline plan copy LONG before it was redrawn for RCME. We were also told to draw our own formers.
Circlip - 27/07/2019
The plan shown here is indeed the one presented with the original article in RCM&E. I sent for a copy at the time and built it using the foam wing as shown. David Hardaker's originals all used foam wings.
RFJ - 27/07/2019
Just seems odd that the article references that both built up and foam wings are shown on the plan. The plan I have (recent reprint) shows both while the one here only shows foam. Either way, if I get the chance I will scan it and send it in.
Martin Hodgson - 27/07/2019
Replaced the article file - thanks to RFJ - which shows the plan did not include a built up wing. Interesting to note how many mistakes appear in the text of these magazines. Up to and including (for instance) getting the designers name wrong, printing the wrong wingspan, and printing full plans at the wrong scale.
SteveWMD - 29/07/2019
It means we're all humans and thank God for that. This is a hobby, not a burden.
Miguel Morao - 29/07/2019
Hi Steve & Mary, Thanks for maintaining such a compulsive website. After several months in the workshop I thought it was time to share the fruit of my labours with all the other vintage RC model glider fans out there.
The Quicksilver (Kwiksilver) is finally ready for covering and RC installation [pics 004,005]. Best Regards,
RussellH - 07/06/2020
Add a comment