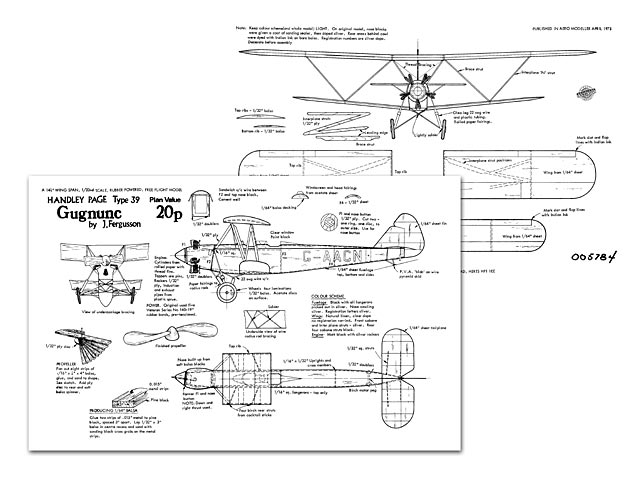 Handley Page Type 39 Gugnunc. Rubber scale model biplane. Wingspan 14-1/2in. Scale is 1/32. The subject Handley Page H.P.39 was a prototype designed to compete in the 1929 Guggenheim Safe Aircraft Competition. The original working name for the aircraft was the Guggenheim Competition Biplane. Only one example was built, registration G-AACN. It used slots and flaps to achieve the STOL performance neded for the competition.

Quote: "FOR MANY YEARS, more than I care to remember, I have been intrigued by a peculiarly named biplane the Gugnunc, or H.P.39 as it is more correctly titled. A fascinatingly ugly, splendidly proportioned, rigidly braced sesquiplane, ideal for model flying purposes. I had suitable three-view drawings, and around 1956 drew up a one-twelfth scale prototype for a 0.8cc diesel motor, but due to business and other commitments I had to give up active modelling shortly afterwards. I still have the unfinished fuselage with centre section and tail-plane fitted! Articles by Ken McDonough and Doug McHard inspired me, during a recent illness, to dig out my old drawing and re-scale it as an indoor rubber model.

Built to Ken's 1/32 scale all-sheet principle it has proved to be a very good flyer and as tough as they come. To date it has had about a hundred flights both with realistic take-offs from the ground and hand-launches, many flights being 'disturbed' by banging off walls, concrete floors, and all manner of like model-wreckers. Sole damage to date has been a split rudder through falling back on to the floor after striking a wall. Ken's construction methods are fully proven and in the Gugnunc allied to Handley Page's 'W' style of bracing, it really pays off.

Outdoor weather so far has not been suitable for flying such a small model, but at 11.45 pm the other night I did take it out to test it on a patch of grass of about 50 yds square opposite our house. The Gugnunc performed a beautifully stable half circuit and landed in the middle of the road just as a car came around the corner into our Avenue. I haven't run so fast in years!

The full size machine was built in 1929-30 specially to compete in the Guggenheim Foundation Air Safety Contest in America. In twenty entries only two survived the tests, the Gugnunc and the American Curtiss Tanager. The latter finally being declared the winner. Then a row blew up which eventually led to law suits, but the Gugnunc survived to appear in the 'New Types Park' at Hendon Air Display, June 27th 1931, resplendent in silver livery as RAF K.1908. In fact it survives today, stored by the Science Museum at Knockholt in Kent.

On the Gugnunc the slots extended throughout the upper and lower spans and were allied to flaps along the trailing edges. This enabled a speed range of 3.36 to 1 to be obtained and the Gugnunc was capable of descending (albeit in a tail down attitude) almost like an autogiro under full control. Power was supplied by the reliable Armstrong Siddeley 'Mongoose' of 130hp Span was 40ft upper, 28ft lower, and it was 36ft 9in in length. As for the model, it hardly needs explanation: Ken's excellent article in the September 1971 issue of Scale Models, tells it all.

The plan frequently calls for 1/64in thick wood, but as this is not commercially available, you will need to sand your own from 1/32in sheet. This is quite easy using the device shown on the plan..." 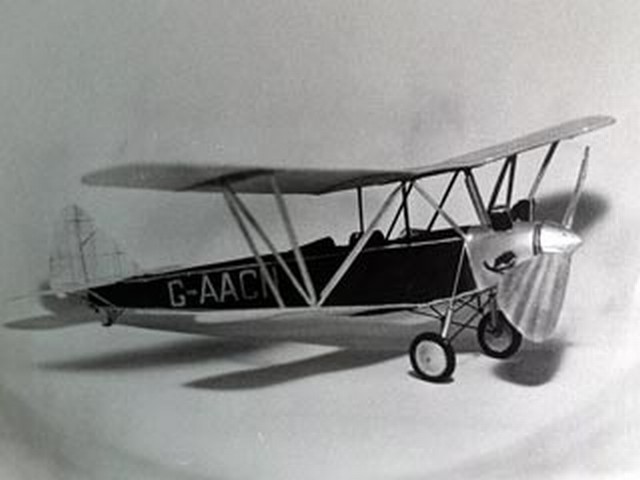 The model photo and more pics 003-006 are from Joe Fergusson's personal collection, gifted to Outerzone by Joe's daughter, Cheryl.
Mary - 22/04/2017
Add a comment