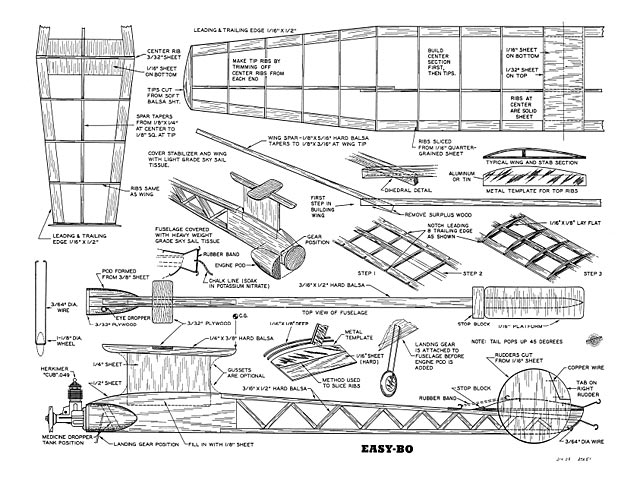 Quote: "With ribs like an indoor model and fuselage like a control line profiler, this Half-A free flight is a cinch to construct. Easy-Bo, by LN Byron.

Easy-Bo follows the conventional aerodynamic proportions used by most successful contest designers. Notice the long tail moment arm and large stabilizer area. The circular end plates on the stabilizer tend to improve its efficiency as well as act as rudders. Only a very small amount of angular difference is used between the wing and stabilizer settings, as it has been found that too great an amount causes power-off and power-on adjustment problems.

Indoor builders will recognize their contribution by the 'slicing' method used in forming the wing ribs. This easy system eliminates sheet balsa ribs and has the advantage of being much lighter. Both the wing and stabilizer use the rib construction feature which, coupled with a flat-bottom airfoil, provides a simple but sturdy efficient structure. The overlapping wing spars automatically provide correct dihedral and a strong joint.

Easy-Bo is a middle-of-the-roader in the amount of wing area. Extremists are using ships with areas of 200 square inches and over, while others looking for the straight-up skyrocket climb consider 100-120 square inches the answer. Easy-Bo is a compromise (145 square inches) between the two theories but is still capable of plenty of high-powered performance.

Any of the Half-A engines such as the Atwood Wasp, Anderson Spitzy, OK Cub, or K&B Torpedo can be installed on Easy-Bo by enlarging or decreasing the diameter of the plywood firewall to fit. Do not use any engine having a displacement of more than .049 cubic inches, or difficulties will be encountered in controlling the excess amount of power.

All construction is conventional. To the fuselage after covering apply at least four coats of unplasticized dope plus two coats of fuel proofer.

If glide tests show a nose-heavy or tail-heavy condition it will be neces-sary either to add or take out incidence on the wing or stab. A small sliver of wood inserted under the wing or stab can be used for this pur-pose. Hand gliding cannot tell you if the ship is in perfect adjustment but only shows that it is not radically out of trim. Check to see that all surfaces are aligned and test glide into the wind and, if possible, over tall grass. The circle should be against torque (clockwise). The rudder tab is used to correct any tendency to circle too tightly in either direction. Tilting the stabilizer produces the turn in the glide. The high side should be on the right when viewing the model from the front.

Make the first power flights with the engine running as rich and slow as possible. Reversing the prop also helps to reduce flying speed. Limit the first flights to 7 or 8 seconds. Let the ship go with an easy hand launch. Do not heave it.

The light weight of Easy-Bo means that you should experience little damage in crack-ups; it's a model that should last - if you light the fuse!" 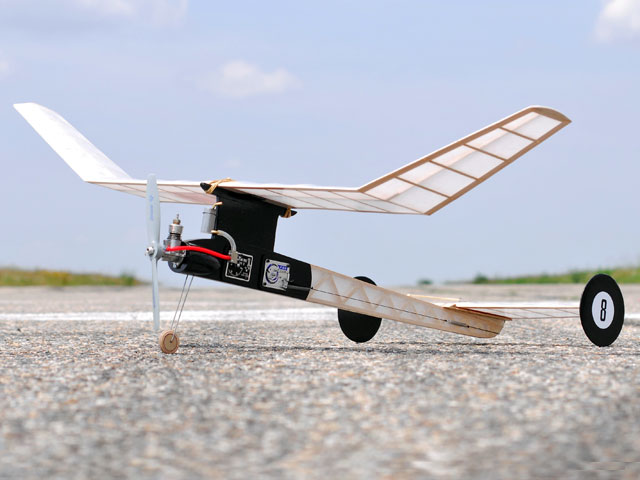 Easy-Bo is a plane with beautiful curves and very simple, fast and pleasant construction [model photo & more pics 005-008]. The engine flies in the left corner and sails right turn. Works well with the Wen Mac Mark IV .049 engine. I recommend to all lovers of FF. Thanks Outerzone.co.uk
MartinHurda_CzechRep - 04/08/2019
Add a comment