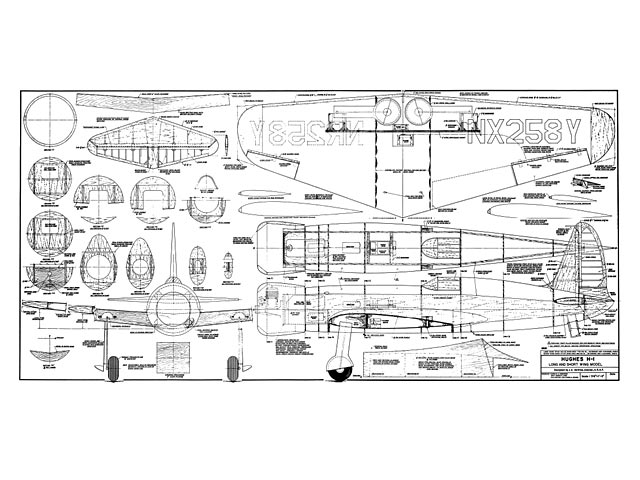 Quote: "Designed and built in only 18 months at a cost estimated to be $100,000, the Hughes H-1 sported two sets of wings. The shorter wing had a span of 25 feet and an area of 140 square feet. The longer wing, which mated to the same fuselage, had a 32-foot span. The short wing was used for the highspeed record attempts, the long wing (which was on the H-1 when it was donated to the Smithsonian recently) served for long-distance flights. Our model includes both wings, just like the one-and-only, world record setting prototype.
From a scale viewpoint, our R/C version of the H-1 maintains its accuracy down to the wing section used. The real racer used the NACA 23012 wing profile, shown on the plans. Our airfoils were computer lofted by the author's son, using data provided by Major Bill Edgington of the U.S. Air Force Academy. Trexler No. 10-G wheels/tires model the prototype's low pressure tires and Goldberg retracts tuck them away. The rudder and elevators show the scale number of ribs. We have chosen not to include wing flaps on the model although their outline is shown. The reason for this is that the ailerons drooped 20degrees when the flaps were lowered on the real H-1,and that would take a tricky bit of mechanism to accomplish on a model.
As nearly as we can tell, the only visible deviation from scale in our H-1 would be the fixed tail skid. The prototype aircraft had a skid that was retractable. Hughes believed in streamlining above all else! It would also be appropriate to point out that our model is designed to a scale of 1.9 inches to the foot.
Discretion being the better part of valor, we suggest that the long wing H-1 be built to acquire some flying time on the model before bolting the short wing in place. Both wings fit the same fuselage so the added area of the long wing will be welcome on test flights. Incidentally, newsreel footage of the short-winged H-1 reveals it to be a very stable aircraft - probably because of its relatively large degree of dihedral. Construction of both wings is the same, with the exception of the aileron/ wing tip treatment..."