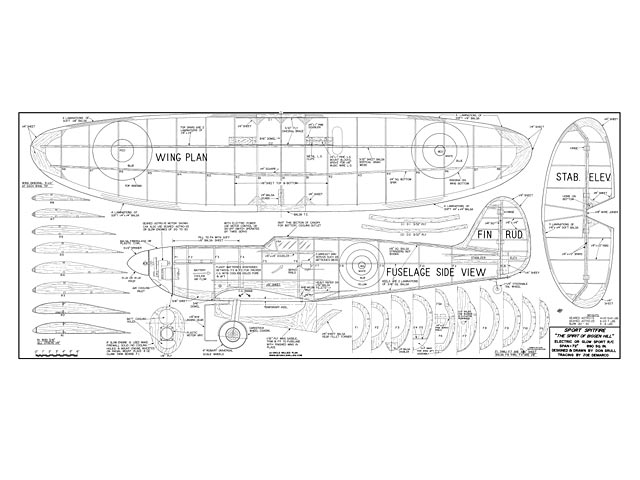 Quote: "Electric Spitfire, by Don Srull. Electric-powered flight gets more practical every day. Here's the story of a happy marriage between a six-foot Spitfire (formerly .23 powered) and a geared 15 electric flight system. It works great. If you want to hear eyeballs snap at the flying field, shoot some silent touch-and-goes!

PICTURE THIS: your helper walks your six-foot Spitfire out to the flight strip where he sets it down pointed for takeoff. There it sits, prop still and everything quiet. You advance the thraufe control on your transmitter, and the 15-sized motor with its big 12-8 fan comes to life. There's just the hum of the whirling prop, and the big bird runs smoothly down the runway - rather like a low-powered sport job - and lifts off smoothly into a shallow climb-out.

As the fighter steadily gains altitude, you make gentle S-turns and figure eights until 200 feet of altitude is reached. You back off the throttle stick to half power, and the ship goes into cruise. Since the motor can't be heard at all at this altitude, the slow, almost floating flight is reminiscent of a Sailplane in a thermal - but a Spitfire yet!

The on-board motor switch allows you to kill the engine at will, and switch it on again. Finally, you set up a long, steady power approach at half power, and grease the Spit onto the grass. As it runs out, you kill the engine again, and it comes to a stop. It sits there motionless for a moment, until you turn the motor on to half power and quietly taxi back to the pit area. The flight time, including the taxi back, is a rewarding eight minutes.

If all this sounds like great fun, you're right! We haven't had such a ball with RC in quite a while. Best of all, it's really quite easy. The power plant is electric - in this case an Astro Flight geared 15. The prototype model grosses a bit less than 5-1/2 lb, and if built as shown in the plans it will work out at about 5 lb.

We were told by the experts that such a big and 'heavy' fighter-type model probably would. not fly on the Astro 15, and if it did, it would fly like a truck. Well, you can't compe this Spitfire to a glow-piowered Falcon or Kadet, but electric power is an entirely different ball game.

After the first five or six minutes of air time with such a graceful bird, we guarantee you'll feel a new kind of modelling thrill - different from any you've experienced before. Spectators and fellow fliers will stop to look; just watch their faces as you cut off power at altitude, glide in dead stick, then turn on power at the last moment and go around. One spectator (who was unmoved by other sights on this busy Sunday) walked over and knelt for a case look at the Spit after seeing it fly. He said under his breath, 'The Spirit of Biggin Hill'. Perhaps he had flown the real one from Biggin Hill during the Battle of Britain.

There's something of a story behind this model. Back in 1973 after my son Mark had learned to fly simple sport RC models, he wanted to build a Spitfire -a big Spitfire. The usual heavy RC Scale models of this type would have been beyond his capability to build and fly. A very light, simple version seemed appropriate, so I drew one, borrowing heavily from the Earl Stahl rubber-powered Spitfire (oz8609) that had been published years ago [in 1940] in Model Airplane News. It was basically a six-foot, gas-pwered 'ghost ship' employing rubber modeling arnd Free Flight techniques. Power was a .23 glow engine; using three channels for control, it had a respectable amount of speed and could cruise on two-thirds-power. It would float in for landings, and touch-and-goes were a cinch. After a couple of years of use, it was hung up in a remote eorner of the basement.

Enter Bill Winter, who has a fascination with unique and off-heat modeling things. Every time Bill visited our shop, he'd wander over to that dark corner and gaze for minutes at the Spitfire. Then one night he arrived with his new geared Astro Flight 15 system which he was going to use (and still plans to use) in Astro's six-foot Porterfield kit. The geared is is a fascinating gadget and Bill was anxious to test it out in a model. In a rash moment I said, 'Why don't we try the electric system in the Spitfire?

For months we discussed the possibilities. Would it fly? How would it fly? Would it take off from the ground? There was only one way to find out, so the next time Bill appeared I had it installed and ready, using a set of Bill's Airtronics mini-servos and his spare XL receiver. Since the model was a little bit beefier than necessary, it weighed a bit more than optimum for the geared Astro 15 - but fly it did, and we were amazed.

You can build this fine sport airplane for either a glow engine or an electric motor, and it will provide you with a conversation piece at any flying site. It will be somewhat lighter as a glow-engine model, and it will have more snappy performance. With electric, however. you can enjoy all the benefits of silent flight: no engine starting problems or exhaust mess, either.

Since I assume anyone who'd tackle a project like this knows the basics of building models. I won't indulge in a now-glue-this-to-that spiel. Instead we'll take you for a guided tour of the less-than obvious things you will need to know.

General notes: At the time my son built this model, the cyanoacrylate super glues were not around, but you can save quite a bit of time and a little bit of weight by using Super Jet, Hot Stuff, etc. We would highly recommend them. The model has a lot of surface area, so use Super MonoKote or some other lightweight material for covering, for minimum weight. Super MonoKote also has the correct matter colors for a scale-like finish. Be aware that typical fabric coveting and paint job could add so much weight as to render the ship unflyable on the Astro 15. With a glow engine or the Astro 25, the extra weight would nut be so critical.

We highly recommend the book rhe Silent Revolution published by Astro Flight. It contains everything you need to know about systems. sizes, and weights of planes suitable for electric power. We gambled somewhat on this Spitfire, because it was almost one pound heavier than the recommended gross. (The version shown on the plans should save 1/2 lb or more as compared to our prototype.) The Spit's generous wing area, however, yielded a wing loading that was in the ball park recommended by people like Boucher, Poling and Kopski - all of whom, incidentally, held crossed fingers until the first test flight.

There are some special requirements to !ook out for if you are going electric. The system should have a fuse, even if you have a shut-off operated by RC. Without a fuse, a snagged prop on a botched takeoff or landing could damage the motor or batteries before you get the motor turned off. By all means, do use a motor cut-off or a speed control. We used an inexpensive three-position switch from Astro Flight (it comes with appropriate resistor) which provides high, cruise, and off motor control. It is operated by the motor control servo.

You must provide adequate cooling airflow for motor and batteries, so follow the plans. On this model the cooling air is exhausted through the open cockpit: cooling air is taken in through openings in the firewall. The batteries in our ship never get very hot you can hold a finger on them at the end of a flight.

It's very important to rind and use the right prop with electric power. Use the size that the instructions recommend as a start, but experiment a little to rind the optimum prop for your particular model. In general, the pitch required is rather high; at least 8 inch, in the case of Spitfire. The belt drive means that the unit puts out about half the normal rpm but twice the torque as compared to the ungeared motor. This means we can use a large diameter, high pitch prop.

On a 12-6 we found taut the Spit wouldn't take off, but on a 12-8 it came alive. We should get even better performance on a 13-8, but this hadn't been tried when the article was written. Nor had we flown the geared Astro Flight 25 motor, which should provide a terrific. increase in performance. Gross weight would increase about a pound, but the much greater power of the 25 should fire up the Spitfire, perhaps even yield modest acrobatic capabilities.

For all laminating, first dampen the wood with water, and then use white glue or Titebond, thinned 50-50 with water, to cement the pieces together. You can also add the 1/8 square stringers on the half shell while it is on the plan..." 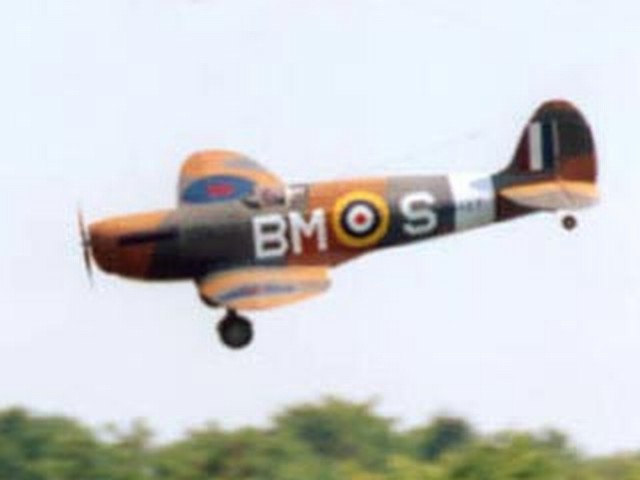 Photo of original model was found online at www.rcgroups.com/forums/showthread.php?119469
SteveWMD - 18/04/2017
Add a comment