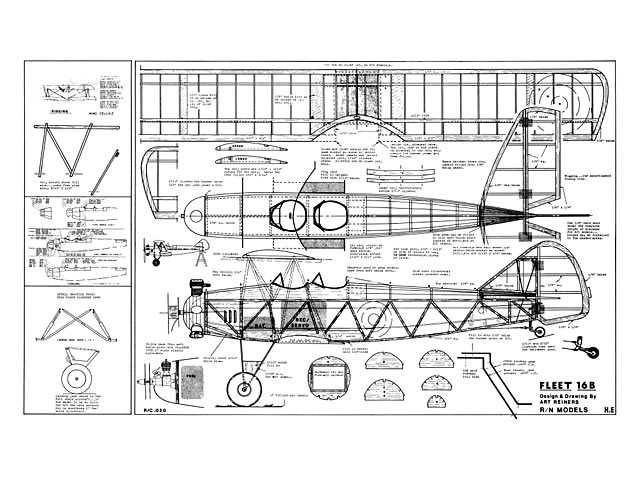 The Fleet Model 16B. Art Reiners, designer for R/N Models, presents his version of the famous 1930 biplane sport/trainer.

Ever popular with the serious scale modeler are the numerous biplanes of the 1930s. One of the most well known of these was the Fleet 16B primary trainer built by Fleet Aircraft Inc, a subsidiary of Consolidated Aircraft Corp. The Fleet aircraft were classics of biplane construction. Beginning with the Model 1 powered by a 110 hp Warner 5-cylinder radial engine, the. Fleets were modified through numerous model changes to the final 16B with a 160 hp Kinner engine, the end result being increased performance in speed and climb.

Much of the information and airframe configuration for the model was taken from the 1935 edition of 'Cadet System of Ground School Training' by Lt Leslie Thorpe. The fuselage frame is built to the same general construction as the original aircraft. Basically, except for the Fleet model F-10-G, almost all models of the Fleet used the 5-cylinder Kinner engine between 110 and 160 hp. The rudder shape varied somewhat from model to model but is most generally seen as shown in our design.

The Fleet 16B was used extensively by the RCAF as a trainer during the early 1940s. Many of these aircraft were restored after WWII and found their way into private use.

In Canada the Fleet was called the 'Finch'. Early models were ordered by the AAF for service testing but were never purchased in quantities. These were called the PT-6 (Model 7) and were equipped with the Kinner 125 hp engine. The rudder and fuselage rear section profile were notice-bly changed and a headrest installed. The original aircraft construction was quite sturdy - tubular steel frame with fabric cover, metal wing ribs and wooden spars. Many Fleets in the Canadian Service were equipped with full cockpit enclosures for cold weather operations.

Our model was originally developed as a .020 free flight but remodeled, so to speak, to take the new Cannon 2-channel block. There are some construction differences between the R/C and Free Flight versions which I will point out from time to time.

FUSELAGE: The fuselage construction is quite conventional being of simple box frame with 1/8 soft balsa nose cover-ing. Build the 2 sides of 1/8" hard balsa strip. If the model is to be R/C then fill in spaces on both sides of fuse-lage where the control cables will come through to provide support. The covering on the forward part of the fuselage and cockpit area can be 1/16 balsa if the model is for free flight. Fill in the bottom of fuselage between the landing gear struts with 1/8 medium balsa after the landing gear is in place. Wire for the landing gear is .047 diameter for free flight and 1/16 diameter for R/C. The landing gear struts are soldered together at the axle position. 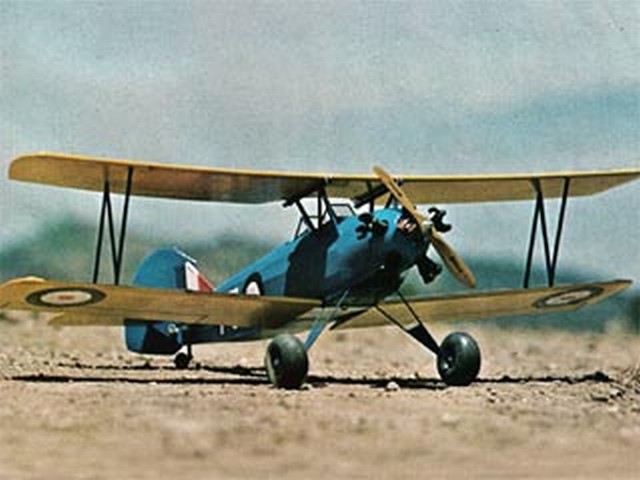