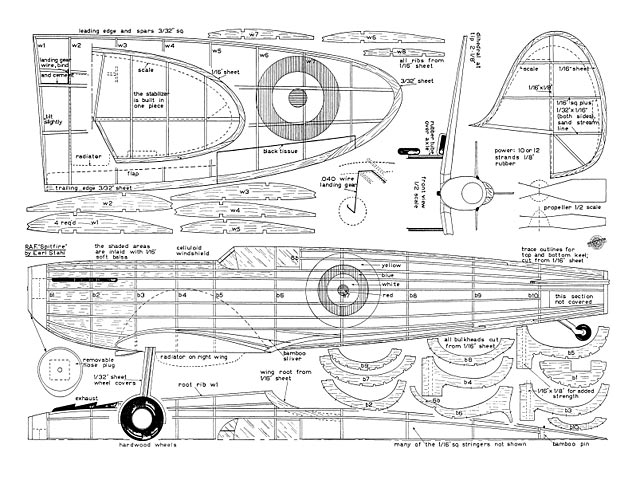 Quote: "The geographic location of England makes it most vulnerable to attacks from the air, and as a means of defense the interceptor fighter planes have been developed. These venomous single seaters operate at close range and it is their military duty to sweep raiding aircraft from the sky. Such planes as the famous Hawker Hurricane and the Spitfire are designed to rocket skyward at an astonishing rate, be fleet enough to overtake the swiftest invader, possess a great degree of maneuverability and finally be deadly enough to promptly dispose of the luckless victim.

The Vickers Supermarine Spitfire is not a new design; the first of this type being tested in 1936. Production difficulties plagued volume construction, however, and it was only recently that complete squadrons of Spitfires were in service. Of all-metal construction, this aerial terror is not only one of the world's best performers but it is also one of the most attractive. A liquid cooled Rolls-Royce engine of 1030 horsepower pulls it along at a maximum speed of 367 miles per hour - its diving velocity exceeds even that of the famous Curtiss 75-A for it is said that a Spitfire attained a speed of nearly 700 miles per hour in a similar plunge. Eight Browning machine guns jut from the wing's leading edge making it one of the heaviest armed single-seaters. Squadrons of these fiery fighters are constantly in readiness to intercept Nazi trespassers.

The model retains the attractive appearance and streamlines of the original and an effort has been made to simplify the manner of construction as much as possible while still retaining the desired features. The satisfaction it is sure to afford, whether on display or in flight, will more than compensate for the time and effort expended on its construction. After becoming familiar with the plans and the procedure of construction, you may start to build:

Fuselage: The fuselage is constructed about a top and bottom keel. To obtain the shape of the keel pieces it will be necessary to trace the top and bottom outlines of the side view. A depth of 3/16 in will be about right and the keels should be cut from 1/16 sheet balsa. The bulkheads are cut from 1/16 sheet also; two of each type are needed. Cut only the notches shown - the purpose of this is to aid in properly aligning the stringers. Enough of the bulkheads have notches cut in them to insure proper spacing of the stringers and it will be a simple matter to cut the remaining ones as needed. Pin the keel pieces into position over the side view and cement half of the bulkheads to place. Remove from the plan and add the remaining formers. Next the 1/16 square middle stringers are added to each side. Exercise caution to avoid pulling the fuselage out of line. Once a stringer is secured to one side of the structure always attach one to the corresponding position of the other side. Check continually to assure a properly aligned structure.

The nose of the original model was filled-in with 1/16 soft sheet balsa. This is not a difficult job but it does require time and patience. Cut individual pieces of balsa so they will fit snugly into each open space between the stringers and bulkheads. When dry the whole nose is thoroughly sandpapered to a smooth, pleasing shape. Cut the nose block from a 1/2 thick block and cement it to place. It is advisable to lightly cement the 1/8 nose plug fast, too, so the entire nose can be shaped attractively.

Cement a w-1 rib to each side of the wing root, being careful to make the angle of incidence identical to that of the plans. The trailing edge of the wing root, cut from 1/16 sheet, is trimmed to the correct size and glued to place. Brace the root bulkheads with pieces of 1/16 x 1/8 hard balsa as indicated by the dotted lines on the bulkhead patterns. 3/32 square pieces are fitted between the root rib and the fuselage to form the leading edge. A 1/8 thick false rib is fitted against the fuselage by the cut and try method - it extends from the leading edge to bulkhead number b-3. Several lengths of thin bamboo may be attached to the bulkheads to help round out the wing root.

Prepare the fuselage for covering by thoroughly sanding the whole structure. For the best covering job only those members of the fuselage which run from nose to tail should touch the paper, so use a piece of sandpaper wrapped about a pencil or similar round object to scallop the bulkheads.

Wing: Since the wing is elliptical in plan-form, all of the ribs in each half are different. Select a sheet of soft grade balsa for all of the ribs except w-1 and w-2 which require a stronger variety. Cut the required number of ribs and sandpaper them smooth. Notches must be cut with accuracy to insure a neat job when completed. The wing's trailing edge is cut from 3/32 sheet; the tips likewise. Select hard 3/32 square spars since they must resist the shock of landings. Assemble the parts directly over the plans and cement the joints firmly. When dry, the halves are removed from their jigs, trimmed and sandpapered to their final shape.

Tail Surfaces: The Spitfire's tail surfaces haven't sufficient area to insure stable model flights so we have enlarged them to more suitable proportions. Build the stabilizer in one piece for greater strength. Outlines of the stabilizer and rudder are cut from 1/16 sheet; ribs are 1/16 square. Additional strips are cemented to both sides of the ribs and when dry they are cut to a streamline shape.

Propeller: In all probability your Spitfire will need some extra weight in the nose to help balance the long tail moment arm, so we advise the use of a white pine propeller. A hardwood prop, while a bit more difficult to carve, will take more abuse. Lay out the blank, as indicated..."

Redrawn onto a single sheet.

Original scans are from http://www.theplanpage.com/esp.htm 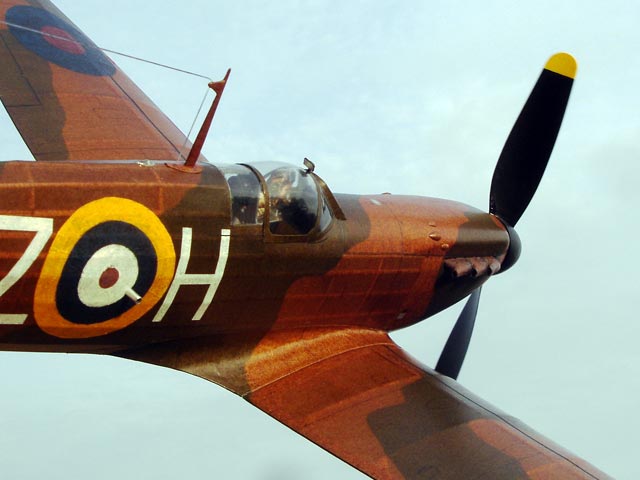 Here's a couple pictures of the Earl Stahl Spitfire (plan oz8609) I built last year. Starting point was a Rockytop models kit. I added the rocker cover fairings, radiator, oil cooler and carb air intakes and miscellaneous lumps and bumps. The finish is Esaki tissue, brown on top with the green printed on it and white on bottom with sky printed on it and white chalk on the backside. Panel work was done with colored pencils. Model weighs 70g without rubber, best flight so far is 100 seconds on 4 x 38" loops of 1/8" rubber (about 28g of rubber).
Thanks again for all you do to make these great plans available!
Mike Kelly - 16/03/2020
Beautiful work. For anyone wants to see more details and photos of this Spitfire model, see Mike's RCGroups posts at https://www.rcgroups.com/forums/showthr... and also video at https://www.rcgroups.com/forums/showpo...
SteveWMD - 16/03/2020
Add a comment