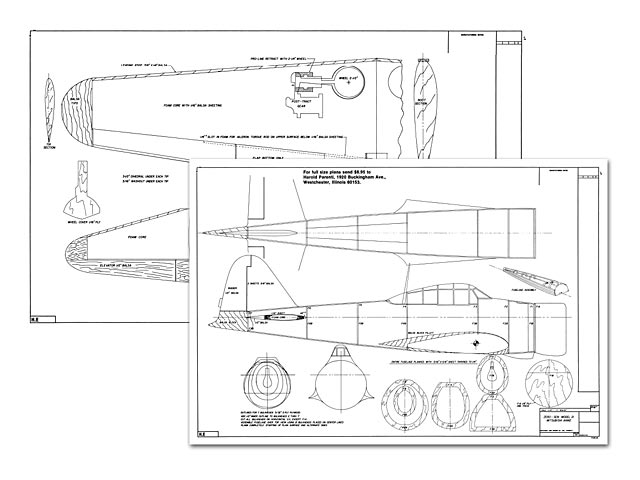 Quote: "Article and model by Harold Parenti Color profiles by Richard Clark What looks exactly like a famous WWII Japanese fighter and flies like a pattern ship? It's the A6M2 or 'Zeke' that won the 1975 Nationals.

It all started about five or six years ago while attending one of the frequent weekend pattern contests. The introduction of another type of competition flying came along to shorten our pattern flying time. First formula I and now stand off scale. Naturally being the type of person that must get involved in anything new, I decided to find a good subject for my first attempt at this new event.

Every type of World War II airplane came to mind but I definitely knew before I made my final decision it had to be a low wing plane with retracting landing gear and very attractive, for eye appeal. The Zero A6M2 was my choice primarily because if it would fly anything like its big brother, it had to be a winner.

Japan put the first Zero A6M2 Model 21 into action in November 1940, a year before the attack on Pearl Harbor, and by December 8, 1941 over 400 Model 21s were available. After the attack on Pearl Harbor, fear of the Zero raced through the Allied and American forces. Although a very worthy aircraft it was credited with performance and maneuverability beyond its ability. The Americans long contended the words 'made in Japan' meant an inferior copycat product and the thought that a Japanese aircraft was superior to an American design was too much to comprehend. It was claimed that the Zero was originally an American design, rejected in the US, then purchased, copied and reproduced in Japan. This fiction was so widely circulated that it is still believed to be true. Other sources claimed that the Zero was copied from the Vultee Vanguard, the Chance-Vought V-143, the Northrop FT-1 and the Gloster F-5/34 experimental fighter. Because of its maneuverability and performance the Zero was the most sought after mechanical prize of the early months of the Pacific war.

So much for the background of the aircraft. Now you can build one of your own to compete in the next Sport Scale contest. The Zero is a high performance aircraft and not intended for the beginner, so I will direct construction with the assumption that the basics will not have to be explained. The final version of the Zero as entered in the 1975 Nationals at Lake Charles, Louisiana was equipped with a Supertigre ABC60, 11x7 Top Flite prop, World Engines Expert seven-channel transmitter and receiver, modified Pro-line retractable main gear, my own design retractable tail wheel and a reworked Goldberg retract servo modified to operate the gear at realistic speed. The wing and stab are foam with balsa covering and the fuselage is all balsa construction. Covering is the old silk and dope method.

CONSTRUCTION. Wing: Prepare four wing skins by butting sheets together or obtaining four large sheets from your hobby dealer. Before covering the foam core, a few cut outs will have to be made. Cut two retract mounting boards from 1/8 plywood per the drawing or make one to suit your particular servo. Be sure to add an additional 1/4 in plywood reinforcement strip under the servo mounting holes. This will give you a 1/4 in mounting surface for the sheet Metal screws..." 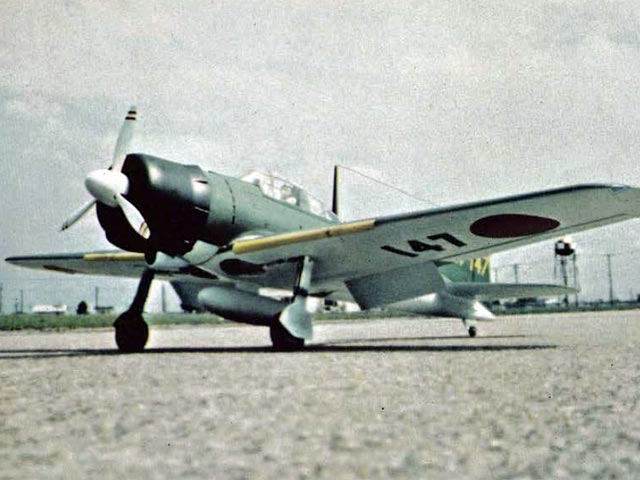