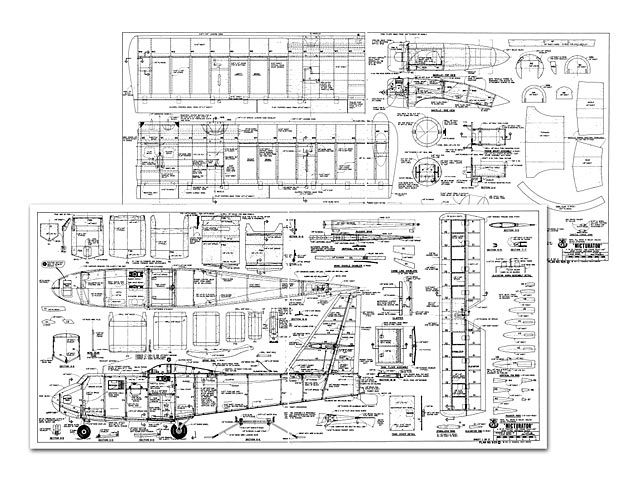 Quote: "A sport amphibian designed around a pair of .19s and rigged to be able to scoop up water and dump on the fire. By Claude Brown Photos By: Dick Tichenor, Richard Young and Bo Liman

The genesis of the Micturator was a conversation held many months ago with Dick Tichenor. You like to fly off the water. Why don't you work up something like this for a construction article? With that he tossed a picture of the Canadair water bomber at me. I pointed out that scale models in various sizes of the Canadair had already been done. Undaunted by my negativism, he charged ahead. How about a practical amphibian for all those sport fliers out there who have a couple of .19s just sitting on the shelf? Something with a high lift wing with about a 12 inch chord, perhaps with flaps, etc. Dick was getting carried away. I had to put a damper on his enthusiasm. It will probably be too big to fit in my Datsun, I said. I'm not interested in any airplane I can't carry inside my car and still have room for my lady.

The man won't give up. He sent me off with a 3-view and some pictures of the Canadair to think about it.

Well, he had me. Since I had never built or flown a twin, a flying boat, or a flapped airplane, here was a chance to kill three birds with one stone. Besides, the idea of having my model in RCM really stroked my ego. So we hashed out our principal objectives:

(1) A stable airplane that someone like myself (an average builder and flier) would be comfortable with;
(2) rugged enough to take a hard landing on the water;
(3) can be built with familiar materials and techniques - no exotic stuff;
(4) uses supplies that are readily available at the local hobby shop;
(5) is easy to convert from land to water flying and vice versa;
(6) will fit into a small car.

After I got going on the project, I added another objective: The capability of picking up water and then, when airborne, releasing it. So on with the fun of figuring areas, moments, hull design and flotation. Engine installation, and so on. Of course, the biggie with any airplane is the wing. It occurred to me that a wing design better than anything I might come up with already existed. Tichenor had used it with great success in his RCM Funster (oz6545). It is the Telemaster 40 (oz9384) wing which is available as a kit from Hobby Lobby. All that was necessary was to reposition a few ribs then add some structure between the nacelles to take the vibrational and landing loads imposed by the two engines. The Telemaster 40 wing kit costs no more than the material necessary to build the wing from scratch and it saves a lot of time and aggravation. Think of snaking all those ribs.

Let's get on to how it all came out. With the plans drawn and the RCM prototype built, it was off to Mile Square for photos and the Micturator's first flight. Well, I'm not going to tell you it flew right off the building board. It took several flights before it performed to our expectations. Then we filled the tank with coloured water, drapped the flaps about ten degrees and took off. With nine pounds of airplane and two pounds of water, it took about 200 feet to lift off. On the second try we made the water drop in close enough for Tichenor to get a picture. Looked great.

The Micturator is fun to fly. It is stable about all three axes and has no bad habits. It's even more fun to fly off the water. Take-offs are a joy to watch and the take-off run seems to be shorter than on land. Several touch and go water pickups have been made. During its thirty or so flights I've asked a number of pilots with various levels of skill to fly it. Solid, Grooves, On rails, are typical comments. So who am I to argue?

Construction. General: First let's cover the usual caveats: Use a flat building surface; protect the plans with Saran Wrap or waxpaper; and stick everything together with some kind of adhesive. My RCM prototype was built almost entirely using Carl Goldberg's Jet and Super Jet. Epoxy was used only when more time was needed for parts alignment. Pica's Gluit was used to butt glue sheeting because it sands well.

Since the tail assembly is large, it was designed to be removable for transportation. If size is not a problem for you, glue it on. You will notice that a continuous hinge pin is used on each movable surface. This makes it easy to remove for covering, cleaning, and - gulp - repair. Also it simplifies hinge alignment..." 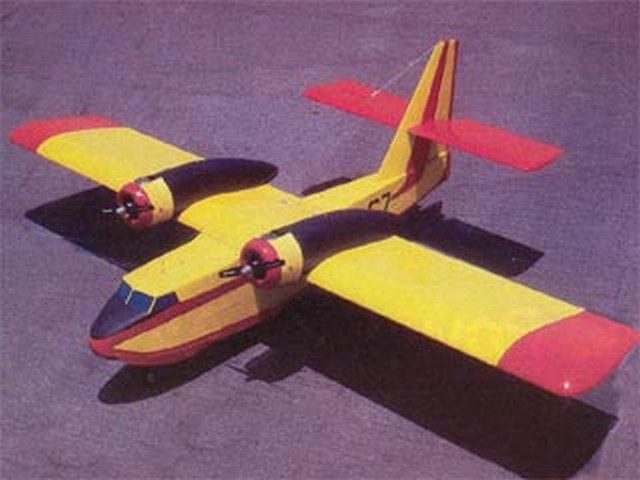