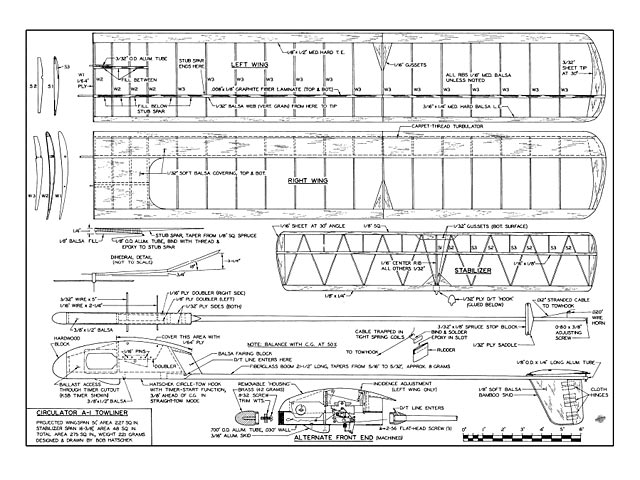 Quote: "Using the latest in construction materials and an ingenious circle-tow and timer-start system, this model is just waiting to take its place among the best of designs for the A-1 class of Towline Gliders. Circulator, by Bob Hatschek.

THIS GLIDER WAS DESIGNED and built primarily as a flying test bed for a number of ideas that I had never tried before, but which I intend to use in future A-2 Nordic Gliders. I'm happy to say that the experiment was a complete success. The Circulator turned out to be a superb A-1 Glider in its own right. Despite the fact that - when this was written - the Circulator had yet to be flown in competition, I already considered it to be one of the most successful designs I have ever produced.

The primary test was the wing structure. We demand quite a lot from Glider wings: they must have a high aspect ratio (long span and narrow chord), a relatively thin and efficient airfoil, and be light-weight. All of these factors detract from the wing's structural strength and rigidity. With modern latching tow hooks and muscular zoom launches, we typically impose loads of greater than 10 times the model's weight at release. The Circulator's tow hook, for example, doesn't even unlatch until line tension exceeds 3-1/2 lb - nearly eight times the Glider's weight. The graphite-fiber spars - measuring only .008 in thick and 1/2 in wide - passed the test with flying colors.

Another important test for me was the Circulator's basic configuration, which incorporates certain features I had hoped would produce a Glider with docile circle-tow characteristics. Briefly stated, my hopes were more than merely fulfilled; the Glider's name was chosen to reflect its excellent handling characteristics on the line.

Without listing them, Circulator includes several other gadgets and techniques that I had not previously used. It may well have some features that I've been using for years that are new to you (that will come out in the construction steps).

Wing. Except for use of graphite (carbon) fiber as the main load-bearing element in its structure, the wing is pretty conventional. For those not yet familiar with this material, it comes in sheets already cured, consisting of unidirectional graphite fiber in an epoxy matrix. At least two different thicknesses are available, approximately .016 in and .008 in; widths range from 2 in to 6 in; lengths go from 24 in up. The sheets can easily be stripped lengthwise to desired widths with an X-Acto knife and a metal straightedge; ordinary scissors work well across the 'grain.' Be especially careful to avoid getting any graphite splinters in your fingers..." 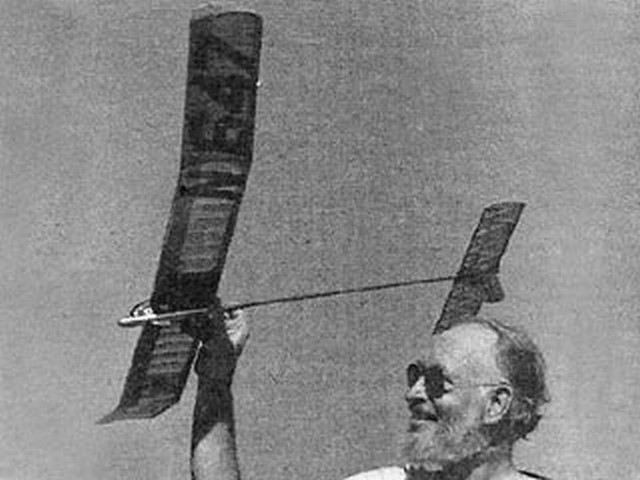