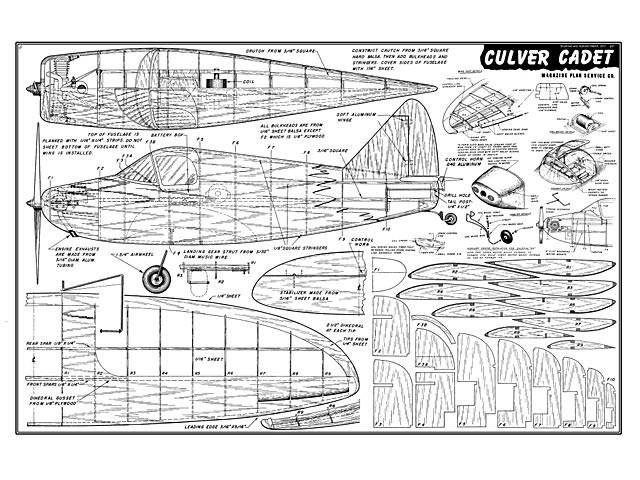 Quote: "This popular pre-war private plane is a swell addition to the ever growing family of fine scale control-line models. Culver Cadet, by Walter Schroder

The trim, snappy lines of the Culver lend themselves to flying scale control-line with limitless possibilities for experimenting with various motors ranging from Class A to Class C. The original model was designed for the Elf Twin, and I think this is the first time this motor has been effectively cowled in. The Elf twin has been considered one of the better motors in Class A but because of its greater width has never been utilized to any extent for flying scale.

Though the model is authentic in scale, its potential speed possi-bilities will allow the BZZZZ boys to compete with Class B and small C jobs. The elliptical wing planform with its small wing area is the perfect control-line machine from the standpoint of both speed and maneuverability; but effective motor control is a MUST, so a simple spark-control system has been incorporated. No gadgets, just a spark-control line directly to the operator.

The fixed-wing slots on the full craft are placed near the wing tips and relieve the low pressure above the wing in a steep climb, improving and allowing easier movement of the control surfaces and thus permitting rapid recovery from any unusual attitudes while in flight. An alternative motor mounting method is shown, using an Ohllson 23 mounted on its side. The 23 can be used in an inverted position but will project from the bottom of the motor cowling.

Fuselage: The conventilmal crutch of 3/16 sq is used. While the crutch is drying, glue all the upper formers in place. The side stringers of 3/32 sq are inserted. When the upper half is dried, remove front workbench and install all the lower formers.

The elevator control system is installed next. Make the platform base of 1/8 hard sheet; have grain running lengthwise to the fuselage. Cut out formers F-3 and F-4 to receive the planform, and glue in place. The control fulcrum is made of 1/8 plywood formed to shape, shown in top view of fuselage. Use a 6-32 RH brass machine screw to hold the fulcrum to the control plate base. Be sure to insert two copper burrs or washers between the base and control plate. Solder the nut and screw so that vibration will not cause the nut to work loose.

The battery box of 3/32 hard sheet is now built between formers F-10 and F-4; these formers are the battery box ends. The bottom of the box is formed by filling in the crutch between the cross pieces. Keep the 3/32 fill-in sheet flush with the top of the crutch. The electrical system is now installed with the coil mounted in the position shown on the plans to maintain the proper balance of the model..." 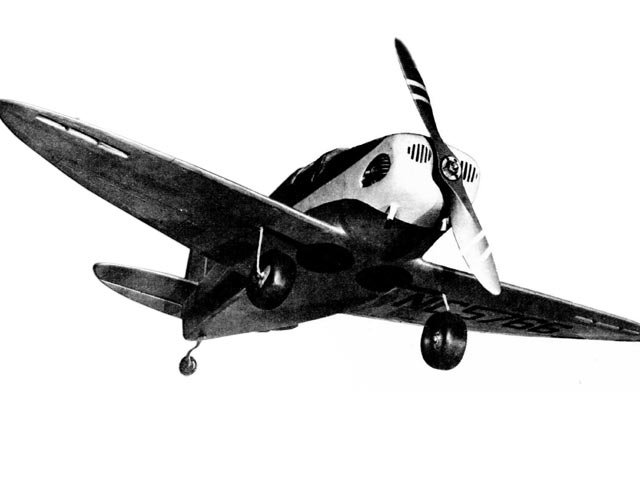