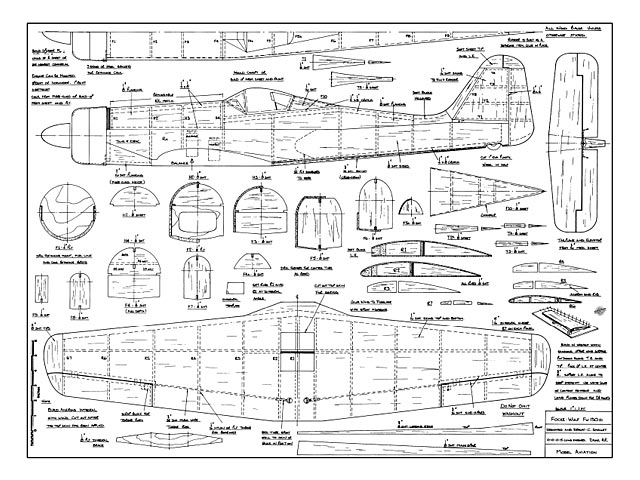 Quote: "Dogfight Duo: Two of WWII's most famous fighter planes, the Focke-Wulf 190D and the P-47D Thunderbolt (oz8593), seemed like such a natural combination that our author decided to include them both in the same construction article. After all what good is a fighter plane without an adversary? Each is for a .10 to .15 engine and a simple two channel radio..."

"IN ITS RADIAL-ENGINED version, this is one of the best-known and greatest fighters of WW II. Flown by many of the leading aces of the Luftwaffe and used in most of the major theaters of operations, it will go down in the annals of aviation and military flying as a brilliant design. Cleverly shaped to a delicately proportioned slim airframe behind the blunt large diameter BMW radial, they were initially mistakenly identified as French Curtiss Hawks in use by the Luftwaffe.

This mistake was quickly realized during early operational combat where it easily outperformed the then current Spitfire V. In fact the Spitfire was hastily modified with the early Griffon engine especially to counter the FW 190 threat until the later refined and improved Mk IX came into service.

Despite the 190's early superiority, its serious drawback was in high-altitude performance, which left a little to be de-sired. This was acknowledged by the design team even before the plane entered service, and the airframe was redesigned to take an inline engine. Three versions were d-signed: FW 190B, C, and D. The D version with the Junkers Jumo engine easily proved to be the best, and the B and C types were quickly abandoned.

Incorporating an annular radiator in the nose of the 190D, the appearance still suggested a slim radial engine, but the in-line-type exhausts were the giveaway. The in-line engine, naturally, was longer than a radial, and the increase was compensated for at the tail by inserting an additional fuselage bay just in front of the fin. The wing remained basically the same layout as the first one.

The increased nose length of the D version led me to model it in the small size as shown in the pictures and plans. (In retrospect, the model initially was nose-heavy, so it now seems apparent that the radial-engine version would be satisfactory for a small model if the radio gear were properly placed.)

The idea behind this model was to produce good scalelike appearance with sim-ple, all-sheet construction, a two-channel radio, and no landing gear (for realistic appearance when airborne). Two prototypes were built. The first was powered by an OS .15 and the second by an OS .10. Both performed very well, the 10-size engine providing adequate power at the model's flying weight of 2 lb.

One of the greatest thrills with these small models is to do low-level nuns mod-erately close in, rolling as you go past and pulling up into a combat climb. If you have micro-sized airborne radio equipment, it would be possible to use a third channel for throttle control. However, neither of my prototypes had throttle control, and I do not feel that the extra bother (and weight of the model) would be worthwhile. This is a fun machine!

Construction. The sequence with a one-piece model is relatively important, as very little of the fuselage can be built before it is necessary to assemble the wing and tail surfaces. Therefore, I suggest that you build the model in the sequential order of the text.

Tail surfaces. The stabilizer and elevators are simply cut from sheet balsa and sanded smooth. Use a cut-down commercial elevator horn to allow an internal connection. Adjustments can be made at the servo end. Build the vertical fin and rudder separately to give a better scale effect. The fin is
built over the skin of one side, and although it has an unusual section, no problems should be encountered. Omit the block leading edge part until after assembly to the fuselage. Round off the rudder leading edge, and glue it to the fin post.

Wing. It is basically built atop the bottom skin. Cut out a 1/16 sheet skin to the outline of the plans (not including the wing tip block). Mark the spar and rib positions on the sheet, and pin it down flat, Glue the main spar in position, followed by the leading edge, aileron leading edge..." 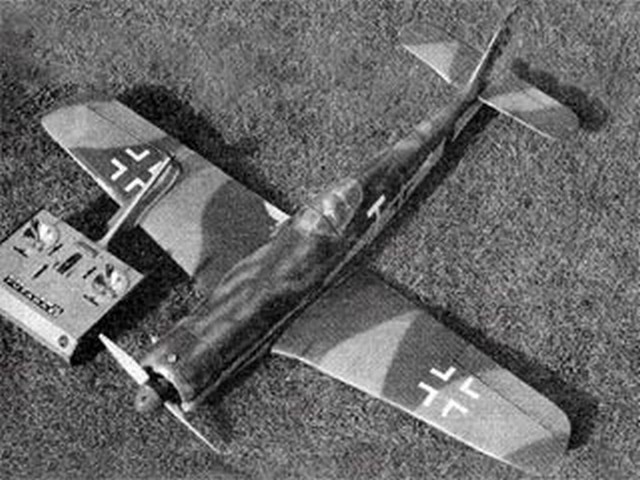