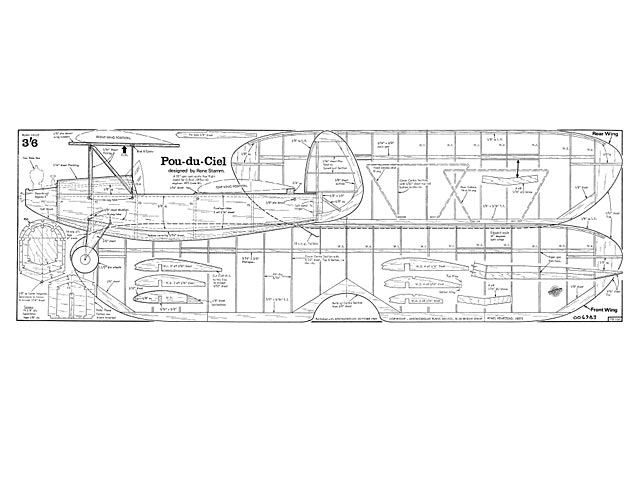 Quote: "Rene Stamm, well known in France for his F/F scale models, designed this 'Flea' as a very stable semi-scale model. The main divergence from full-size is that the model is rather more conventional - the full size has no elevator, but changes altitude by varying the incidence on the front wing. The wing on this model however, should be well and truly fastened down with elastic bands!

The fuselage is constructed by first cutting out the two 1/16 in sheet sides, and glueing on the four 1/8 in sq longerons. Next, cut out all the formers, noting that the top parts of formers F1-3 are cut off horizontally as indicated by the dotted line. This is to enable the fuselage to be built inverted.

Mark the positions of the formers onto the fuselage sides, and cement formers F3 and F4 in position - making sure that they are square and true. When dry, invert the fuselage so that a flat edge is presented to the building board, and insert the remaining formers - being careful to avoid a warp. Add the 1/8 in sheet doublett for the landing gear, and epoxy the 16 swg tubes in position for the undercarriage and cabinet attachment.

Glue the lower longeron to the formers, and sheet the underside of the fuselage with 1/16 balsa. Also, sheet the top of the fuselage aft of F4 - ensuring that the grain runs from side to side to increase rigidity.

Mark the position of the engine on former F1 and drill the holes for mounting it. This is best done by inserting 8 BA bolts from behind the former, and preventing them from turning by soldering 22 swg wire across the heads. The top halves of formers F1-3 are then glued in position, the 1/8 sq stringers added, and finally plank with 1/16 sheet. Carve the nose block to shape from soft balsa, and hollow to clear the engine.

The fin is made by cutting three rectangular blanks, approximately 1/2 in wide and to the lengths shown for the ribs, notched for the spar and LE. The TE is then constructed from 1/8 sheet, as is the fin spar..." 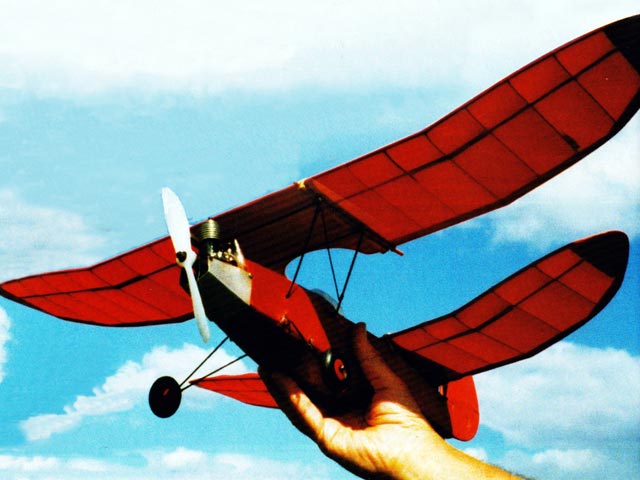