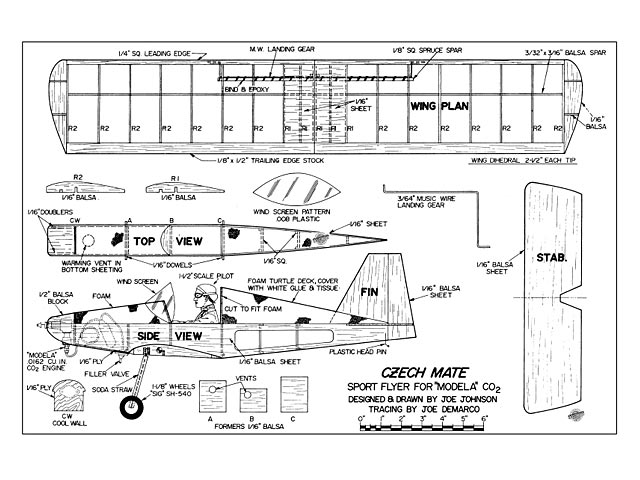 Quote: "The source of the CO-2 engine which powers this attractive FF sport model was the origin of the catchy title. Flights of 30 to 50 seconds are the norm when built lightly and according to instructions, so it should be a great small-field flier.

THIS DELIGHTFUL little sport model was named before it was designed! As a matter of fact, it was constructed as the result of discovering a name.

The Czechoslovakian Modella CO-2 engine was no longer being sold in the US when this was written, but it can be ordered from Micro-Mold, Station Road, East Preston, Littlehampton, West Sussex BN16 3AG, England. They will ship via air mail for a total price of 14 Pounds Sterling, (Checks in Pounds Sterling are available at most larger banks. Check the foreign exchange section of a daily paper for the current prim at the time of writing, 14 Pounds Sterling was $25.90.)

Testing this new import in our hand quickly revealed our intended model would be much too small to handle the power of this remarkable engine. To our considerable pleasure, the Modella produces torque far in excess of any CO2 powerplant previously experienced.

Consequently, we needed a design to best mate with the potential of this Czech engine. We needed a Czech Mate. With an inspired name like this, who could long postpone developing a model to match the name?

We have long enjoyed designing and building low-wing Free Flight sport and Scale models, primarily to de-bunk the prejudices of many 'experts' who maintain they are extremely tricky to trim. One need only follow accepted aeronautical principles for success with a low-wing Free Flight.

The proof of this concept is best illustrated in the fact that the Czech Mate flew beautifully the first time it was launched. We have subse-quently flown it more than 100 times and have yet to change the original settings. Luck? Certainly. But as Frank Monts once told us: I seem to get luckier as I learn more about trimming model aircraft.

The standard tank supplied with the Modella provides 30- to 50-second flight dependent on the engine speed selected. A direct relationship exists between engine rpm and run length, as there is a finite volume of fuel. Speed is controlled by screwing the cylinder head clockwise for increased revs. Trimmed for a left power pattern, the Czech Mate climbs in tight circles. then flattens out as the gasis discharged. The prop is usually still barely ticking over as the model lands in a most realistic manner.

Though certainly not a soarer, Czech Mate is one of those models capable of providing countless hours of low-cost flying from a relatively small field. She's great for running over to the neighborhood playground after work for a few relaxing flights as the sun sets.

Construction. We used cyanoacrylate adhesive throughout the construction, except as noted.

The fuselage is a simple balsa box constructed of two sides and a few bulkheads. Its basic assembly is done with one side pinned flat onto the building surface. Use a 90° triangle to position the bulkheads. Place the second side into position, then pull the tail post together, and add the crosspieces.

Drill all holes before assembly, but do not permanently install the dowels until the fuselage is covered. The motor and tank are installed before closing up the bottom - but after the covering stage. The rudder and stabilizer are not installed until the final stages of assembly.

The foam turtledeck is rough-cut to an oversized outline, then spot-glued to the fuselage top with dabs of 5-min epoxy. Cut the foam with a sharp knife drawn in one direction through the material...." 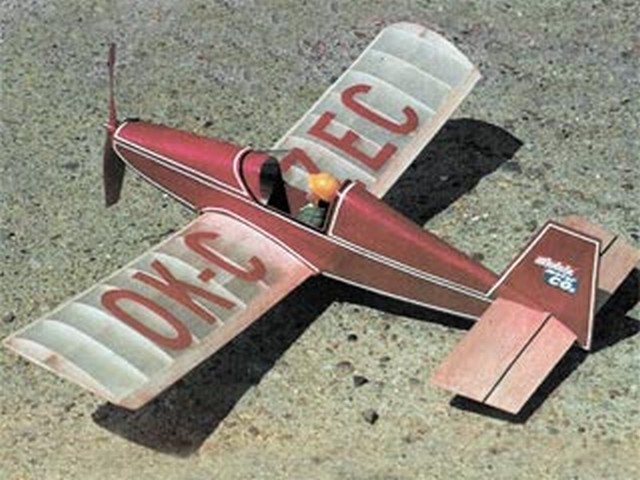 Joe, Do you have an email address and website link for the company you mentioned in the text, Micro-Mold, England, I have had trouble tracking them down! Thanks
Mark Robinson - 18/05/2020
This is all text quoted from the magazine article, printed back in 1982. Safe to say that Micro-Mold can no longer help out with the supply of CO2 engines.
SteveWMD - 18/05/2020
Add a comment