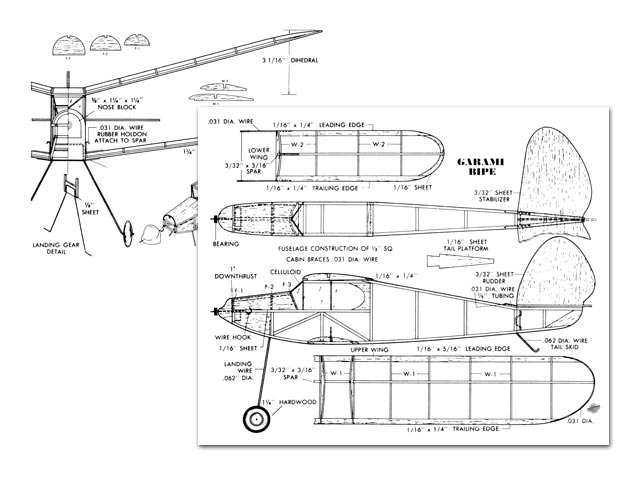 Quote: "The Maestro of model design presents his latest creation for powering by rubber or CO2 motor. Garami Bipe, by Lou Garami.

LOOKING for a 'quickie' model to build ? Got some spare balsa gathering dust in the scrap box? Here is one of the niftiest looking little rubber jobs ever designed for sport flying. Easy to build, easy to fly, and inexpensive, too. Most of the materials you already have in the scrap box, the others are all readily and cheaply obtainable at your local hobby shop.

If you have never built and flown a 'bipe' then you've got plenty of fun ahead. Biplanes are easier to adjust and fly than most monoplanes as they do not tend to stall as easily. The reason for this is that on a biplane arrangement, the upper wing usually stalls before the lower wing when the model reaches a critical angle, thus causing the model to slowly mush back into a normal flying position. Monoplanes, on the other hand, usually stall much more abruptly, and with a greater loss of altitude.

Although this model, having a wing span of 25-1/2 in, was primarily designed for rubber power, it can easily be enlarged to fly with Herkimer's CO2 engine. If you chose to install a CO2 engine the plans should be increased three times the size shown in the magazine. Also, the wood sizes of the basic structure must be strengthened and increased by adding at least 1/16 to wood sizes mentioned on the plans. Weight can be saved, however, by cutting down on the length of the landing gear, as the CO2 engine only swings a 8 in prop in comparison to the 10 in diameter prop used for rubber-power flying.

The plans shown here for building a rubber powered model are reproduced exactly one half size. Note that the fuselage formers (F-1, F-2, F-3) and wing ribs (W-1, W-2) have been drawn full size to save building time. The grid outline around the border of the two pages is divided into 3/16 in spaces and will aid in enlarging the plans as any dimension shown can simply be multiplied by two to get the actual building size.

Heavy brown wrapping paper obtainable in large sheets from local stationery stores (or by asking the butcher) is ideal for pencil drawings of the enlarged plans. Use a large ruler when working on the drawings as it is more accurate. A 24 inch ruler is fine, but if not available, a straight-edge can be improvised by using a sheet of 1/8 x 3 x 36 in balsa. Be sure to sight along the edge of the sheet you chose to make certain that it contains no curves or warps.

Begin enlarging the plans by drawing the two page panels printed here exactly twice size. Draw in the grids spaced at every intervals right across the plan so that they run parallel to each other. Number each grid shown on the maga-zine page and apply the same number to your pencil drawing to help you in check-ing dimensions. Long sweeping curves su• ch as the fuse-lage outlines can be drawn by using an x Vi" strip of balsa as a guide. After the main fuselage points have been located on the gridded 'graph paper-like' background, the balsa strip can be pinned in position and traced around with a pen-cil to give a smooth line. Once the main outlines have been lo-cated and penciled in, draw the spars and cross members. Don't forget that any dimension not mentioned on the plan can be figured simply by measuring off the size on a ruler and then doubling that figure.

Start construction by beginning with the fuselage. Pin your drawing to a soft pine bread board or sheet of Masonite and spread a sheet of wax paper over the plan to protect it from damage. Now pin the 1/8 sq basic fuselage members in position on the side view of the fuselage. If the wood you are using (it should be hard for the fuselage) resists bending around the bottom curve of the fuselage allow it to soak in water a short time before pinning it in position.

The cross members should now be added. Do not remove the first fuselage side from the board, but start building the second side right on top of it, by follow-ing the same procedure. When finished, allow plenty of time for drying and then remove both pieces from the board. The two fuselage sides can now be separated by carefully slicing them apart at the glue joints.

Add the top view fuselage cross members but first cement the two fuselage sides at the rear and begip adding the cross members by working from the rear towards the front of the fuselage. Watch carefully during this operation to see that the fuselage does not warp or dry out of line. Check frequently by sighting along the top. Fuselage nose formers (F-1, F-2, and F-3) should now be cut..."

Update 25/06/2016: Replaced this plan with a corrected version, both sheets now scaled to fullsize at 24 in wingspan, thanks to Pilgrim. 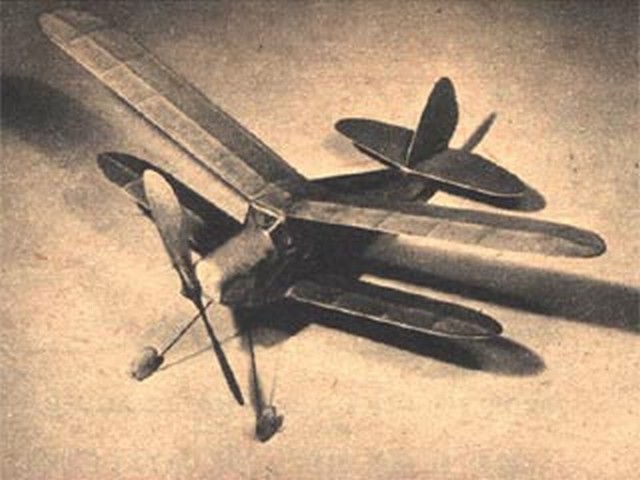 The scaling for the Biplane is different on both plan sheets. The first "page" prints the plan with the grid at 0.5 inch and page two at 0.68. Difficult to re-scale, as the action works both at once, requiring a second re-scale. I guess it would not be too awkward for those who know their way around, but for Joe Average...
PeteBrecker - 25/06/2016
Add a comment