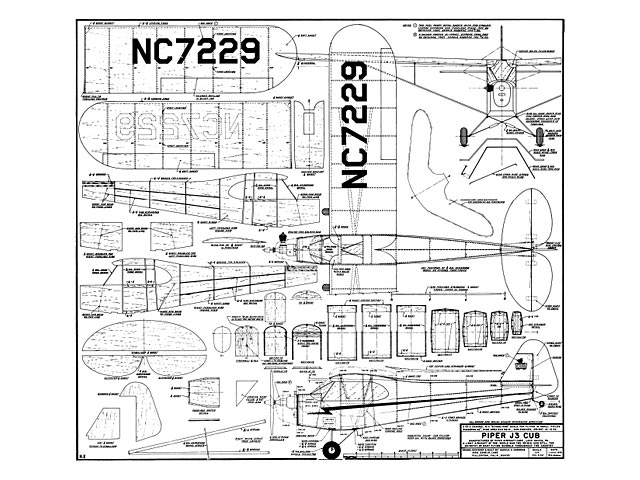 The Piper J-3 Cub is the third subject (the first was the Bristol Scout Biplane) in our series of 'Schoolyard Scale' models. This type of model has been presented with the intent of making plans available which use to the best advantage the new miniature radio gear that is now available.

There are many advantages to the smaller model; low cost of materials, ease of transportation even though the model is built in one piece, less en-gine noise, less fuel consumption, smaller flying fields can be utilized, smaller workshops can be used, and finally, the smaller models generally do not crash with the complete destruction that a .60 engine powered model does.

Every model builder has several Cox .049 engines in his model box. Cox supplies a muffler and a throttle control for these engines. Parts are avail- able and inexpensive.

The Piper J-3 Cub, a Brief History. The Cub is possibly the most famous lightplane in America. Originally manufactured in 1931, the first E-2 Cub bears a resemblance to the J-3 trainer in size and general shape, but the old E-2 was a simple 2-place open cockpit ship with a little 37 hp engine which gave it a top speed of 62 mph. The J-2 Cub, first made in 1936, had an improved 40 hp engine and an enclosed cockpit. It was almost identical in appearance to the J-3 which was introduced in 1938 with a 65 hp engine.

The Cub has served in many capacities; cropduster, flying ambulance, business and freighter plane, trainer, etc. During the Second World War the Cub had many designations; YO-59, O-59, L-4, L-18 and L-21 Grasshopper. 1,801 aircraft of the L-4H variety were produced and 1,070 L-4J's were completed by the end of the war. The L-4 performed its first combat mission for the Army in the early 1940s, when four of these lightplanes flew off the deck of an aircraft carrier to spot for ground units going ashore in the invasion of North Africa. Thereafter, the Piper L-4s operated with the Army in every campaign and on every front.

Building the Model. Start by cutting out all the parts shown on the plans. If you have access to a Xerox copier, parts can be copied from the plans and the copies stuck on the wood with rubber cement. Cut the part out right through the paper and peel the paper from the wood when completed.

Fuselage Construction. Cut out the two fuselage sides from 1/16 sheet balsa. Score and bend the sides along the center lines of the two rear fuselage stringers. Next, locate and cement in place the tapered side stringers. Then cement the 1/16 x 1/4 vertical braces, the 3/32 dia hardwood dowel..." 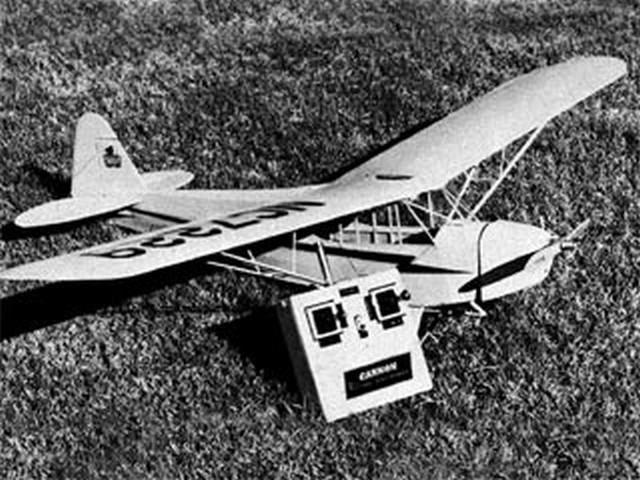