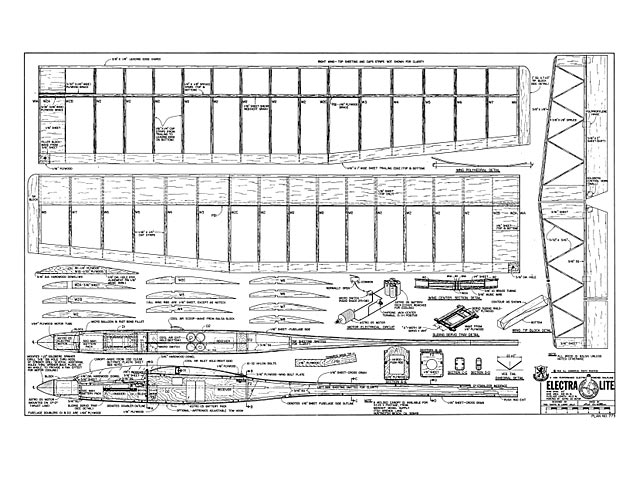 Quote: "I had been wanting to design and build an electric sailplane. Not one that just dragged around the sky with the motor running and then gracelessly staggered back to earth when the batteries went flat. No, what I wanted was an agile, lightweight model that flew like an airplane: fast, capable of simple aerobatics, yet one that would still thermal in light lift. This would have to be a plane that I could use to chase that 'sucker' thermal with ... the one that leads you hopelessly down wind, allowing only inches of altitude gain for each turn, and then dumps you out in a cold down draft. With the right electric powered sailplane I knew I could beat that 'sucker' thermal by turning on the power and driving on home, through whatever down drafts Mother Nature chose to throw at me. As a fringe benefit, of course, I knew that any parking lot, schoolyard, park, or outdoor bowling alley, could serve as a flying field.

But then again, I really wanted to design a new competition sailplane too. I liked the looks of some of the new FAI sailplanes with their faster airfoils and clean, low drag shapes - but I wanted something a little smaller than those planes.

With the motor batteries in place, the 93 inch bird weighs in at a touch over seven ounces per square foot of wing. Take the battery pack out (the one for the motor!) and the wing loading drops to 5-1/2 ounces per foot. The design utilizes good, clean aerodynamics including a thin, fiat bottom airfoil with an aft high point, and a rearward Center of Gravity to give it an excellent speed range. Then I added a pound and a half of lightness, to make sure that the Electra-Lite would thermal with the best of them. (Lightness, incidentally, is one of the few items that is not available at your friendly neighborhood hobby dealer.)

Most of you have seen electric powered models that were less than successful. They all tend to be overweight and marginally powered. When my cohort in crime, Tom Yantis, told me that he wanted to fly an electric glider in the upcoming electric championships, I was somewhat fess than excited. I reasoned that how could something that weighed a ton thermal? After many gallons of late night coffee at Macdonalds, we discarded most of the available designs as being either too heavy or too flimsy or both. We decided that rather than adapting an existing sailplane to electric power, we would have to start from the ground up.

We weighed the components that we absolutely had to have aboard - a three channel radio with light servos and an Astro 05 motor and battery. I knew that a plane with a 7 ounce wing loading would give us the performance that I was looking for. Accordingly, we arrived at a total weight parameter of 40 ounces. This seemed to be as light as we could build a plane without sacrificing too much strength. Naturally, I never land on a wing tip - but I wanted a plane that could let my friend fly too! (Note, humility is one of my more outstanding traits!) With these figures we were able to come up with the total wing area. The general planform of the airplane was agreed upon. and then we divided up the structural design responsibility.

I gave Tom the Astro 05, the radio, and the batteries and told him not to come back until he had it all in a fuselage that weighed less than thirty ounces total. He mumbled something about minimal frontal area and Vee-tails pick their noses up better when they turn, and he stumbled out the door. He was right, of course. Besides, a Vee-tail stays up out of the weeds, and it weighs less too.

I ordered another Big Mac and started giving some serious thought to the wing design. I was only allowed ten ounces total weight so I knew I'd better do my homework and get it right the first time. I figured I had plenty of time. It would take poor Tom at least a month to complete that fuselage. Tom arrived at my front door at nine o'clock the next evening with the finished fuselage in his hand..."

Quote: "Congratulations! You've just entered a new realm of radio controlled model soaring. The Electra Lite was designed to be an extremely versatile, milti-purpose sailplane that is equally at home as an electric powered sailplane (note we said sailplane not powered glider. Sailplanes are capable of thermal flight!) With the motor batteries removed, Electra Lite becomes a very competitive conventional sailplane for thermal or slope soaring, and of course, its built-in stability makes it ideal for the beginner as well.

The key to Electra Lite's success has been its efficient lightweight structure. Remember, throughout the construction that the secret is making it LIGHT and Straight. Don't be tempted to add any additional structure. The design has been thoroughly tested and is more than adequately strong as is.

The prototype Electra Lites were all built using cyancacrylate glues (Hot Stuff, Zap, etc.) on nearly all joints. Five minute epoxy is used on some high stress areas which are called out on the plans. If you wish, white glues such as Tite Bond can be substituted for the epoxy, but re-member to use these heavy adhesives sparingly. The instruction sequence is laid out for ease in construction, You can circle the step number to keep track of where you are. Good luck, and remember: KEEP IT LIGHT!

1. You'll need a flat building board at least 12 by 30 in to build the Electra Lite wing. Unroll the plans and set the two bundles of strip wood aside. Pin the right wing plan in place over your building board and cover it with waxed paper.
2. Locate the larger bundle of wood. Flemove the 3/8 by 1/4 by 30 inch baize leading edge and the 1/16 by 1 by 30 inch trailing edge. Pin them in place on the plan.
3. Locate the 3 inch lengths of 1/16 inch wing sheeting in the small parts bag. Glue the sheeting in place be-tween the leading and trailing edges as shown on the plan..."

Article pages thanks to hlsat.
Instructions. 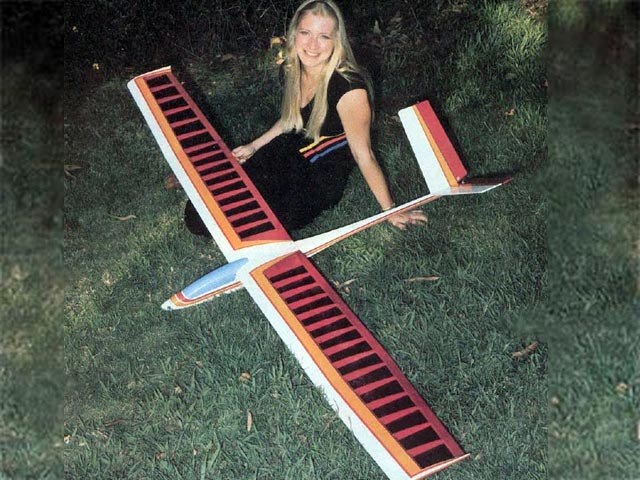