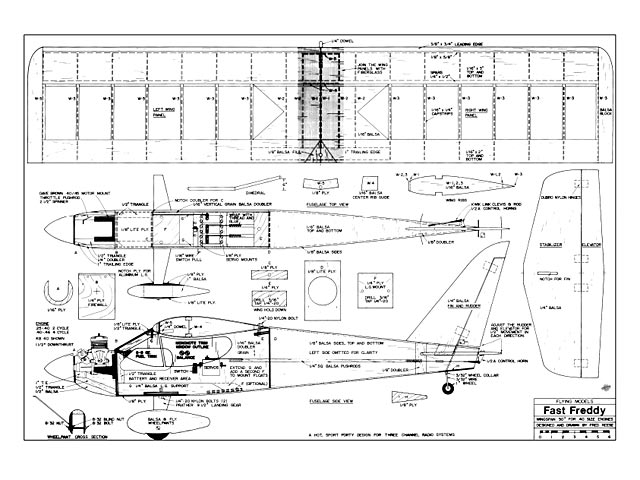 Quote: "Fast Freddy, by Fred Reese. For thre channel radios, a hot sport .40 sirplane. It's a versatile performer that can also be flown with floats or skis. A quickee 500 in sheep's clothing!

Over the years, I have continued to build three channel sport airplanes in between more sophisticated aerobatic and scale aircraft. Three channel aircraft, like Fast Freddy, are quick building and versatile. This is the airplane I fly in unusual places or fly with floats or skis.

Fast Freddy is unusual because most three channel models this size or for .40 size two cycle engines are of the trainer type. Although it has its docile qualities, with a K&B .40 pulling up front, Fast Freddy is not a trainer. Actually it is a Quickie 500 in sheep's clothing.

Other than in people's heads, it is not written that a fast .40 powered airplane has to have ailerons to perform well.

Fast Freddy is fast. Fast Freddy will do axial rolls as well as many aircraft with ailerons. Inverted flight requires only a 'touch' of down and, once in the air, you actually forget the ailerons are missing. I enjoy power, and the K&B 40 will pull Fast Freddy vertically, from take off, for as long as I want to hold the nose up.

Fast Freddy is a chance for those that bought a radio with only three servos to go beyond the typical three channel trainer in performance.

I have been flying Fast Freddy with a prototype set of ACE R/C floats. These are foam floats that can either be covered with wood and paint or simply be covered with Econo-Kote..." 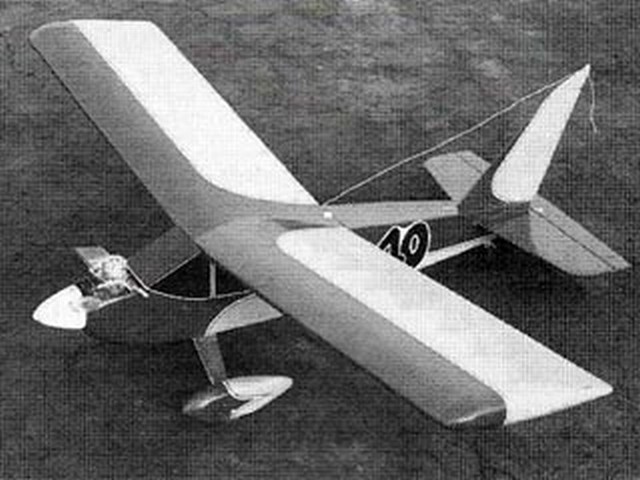