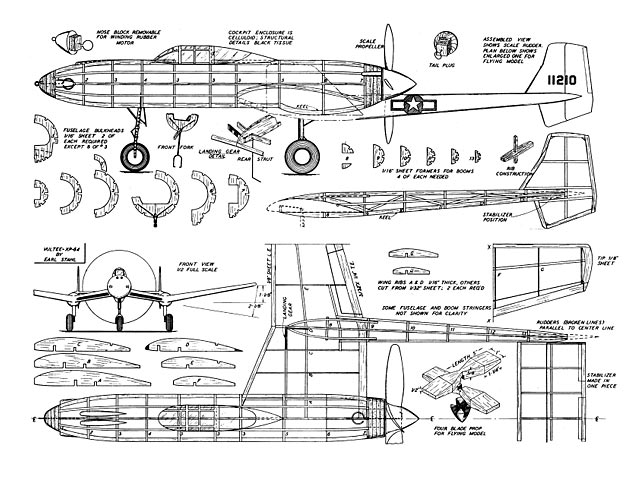 Quote: "The search for superior fighting aircraft is an endless one for all warring nations. Constantly poring from engineers' drawing boards and from aeronautical laboratories is an endless stream of ideas ranging from minor modifications for successful craft already at grips with the enemy to radically new craft boldly striving for supremacy over anything the foe, can hurl into the conflict.

Consolidated Vultee XP-54. This unconventional fighter has been under test by the Army Air Forces but was discarded in favor of fighters now in, or going into production. No reason for abandonment of the XP-54 has been given.

A plane of very striking appearance, it incorporates a number of unusual features. Driving the four-bladed pusher propeller is an experimental Lycoming liquid cooled engine of great power. One of the pet gripes of pilots who condemn pusher aircraft such as this one (and justly so!) is that when leaving the ship in an emergency, the body would in all probability be hurled into whirling propeller blades. This problem was solved in the XP-54 by equipping it with an ejector which casts the pilot beyond the arc of the prop and also the tail surfaces. Situated midway on the pod like fuselage, forward of the engine and inverted gull wing, the pilot's cockpit affords unusual visibility, a decided asset. It is pressurized to enable the pilot to hunt and fight at great altitude. Four cannon of probably 20 mm bore are provided for in the long nose.

Because of its unusual yet practical design, the Vultee XP-54 makes an excellent flying scale model. The drawings are accurately scaled and will serve as the basis for both a flying or exhibition model. Construction of the miniature will not be difficult if drawings and details sketched here are followed closely. Balsa wood is used throughout and quick drying colorless cement is the adhesive. Incidentally, the reward for neat, accurate work is finer appearance and better flights!

The model's large size and odd shape made it necessary to extend the side and top views over two pages each. Simply match the pages together so work can be done atop them since most parts are shown full size.

Crossectional shape of the fuselage is cylindrical so most bulkheads are circular. The keel and bulkhead method of construction is employed and each of the four keels (top, bottom and two sides) and the bulkheads are cut from 1/16in sheet balsa..."

Update 01/04/2017: Resized this plan to correct wingspan at 18 inches, thanks to Doug and pb_guy. This is based on the 5in dimension shown on the prop blank, also the 1/4in wing TE wood size shown. Looks right now, thanks guys. 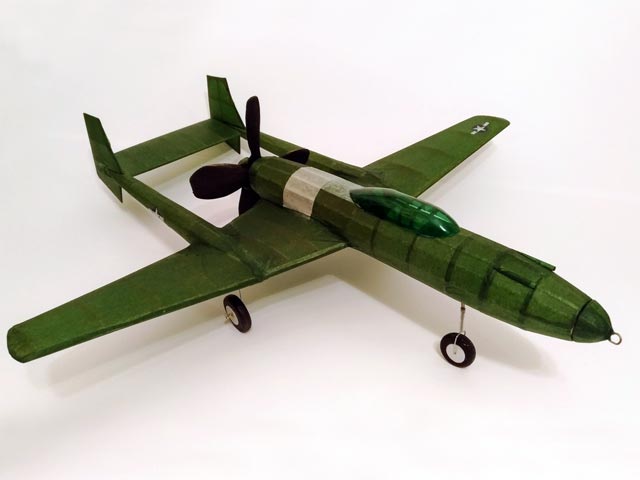