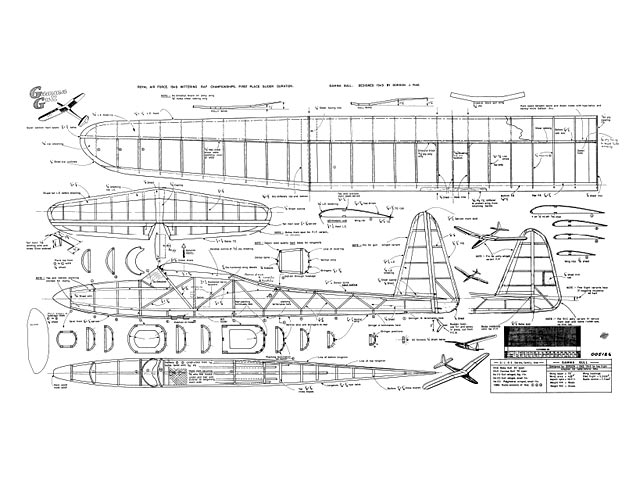 Originally designed by Gorden J Rae in 1949 for freeflight. This is a later plan from 1986, showing the same design adapted for 2 channel radio control. Note this plan shows both gull-wing and polyhedral wing layout.

Quote: "Invade your 'new world' skies with a bit of the 'old country' in the form of this 1940s glider from merry England. By Gordon Rae.

The port wing responds to the firm pressure of the rising air; then, as I ease the stick over to turn, she banks into the lift. Centering with a little back stick and a touch of corrective rudder, the silky black nose sweeps the horizon and Gamma Gull starts to climb.

Even though I'm a glider guider who's usually engaged in the construction of pylon racing machines and composite material F3B craft, my thoughts have recently turned to the older, simpler ways of modeling. I recalled the gliders of the old days that required just a stack of balsa strips, some sheet, perhaps a little ply, a razor blade, and glue.

So, following a recent suggestion by our editor that a glider from my workshop might be interesting, I decided to delve into that dusty box of old plans up in the attic and see what I could find from those 'good old days.' I came up with just the model I had in mind. My free flight Gull design from 1946-49 looked to be just the job.

Gamma Gull was a gull-wing free flight sports model I used in May 1949 to win the glider event at the Royal Air Force championships. At the time I was serving with the RAF and the 1 to 1 scale aircraft that engaged my working time were North American AT6 Harvards. With my sleeping quarters at the end of the runway, the noisy combina- tion of Pratt & Whitney Wasp and Hamilton Standard were not much appreciated! This then was the environment in which the fledgling free flight Gamma Gull started life, designed and built in off-duty hours in the RAF modeling club workshops of which I had charge.

That was the original free flight Gamma Gull, which was developed from my first Baby Gull (oz2008) of 1946. The model presented here follows the original free flight Gamma Gull design in outline and structure, and incorporates only the modifications necessary for two-channel radio control on rudder and elevator. The information provided on the plan is sufficient for building the free flight or radio control polyhedral or gull-wing versions.

With a 500-mA flight battery and standard size servos, the weight comes out at around 24 ounces, which in turn gives a wing loading of 7.7 ounces per square foot. With an aspect ratio of just over 10.7:1, a tapered planform, and near elliptical tips, the wing is quite efficient. This produces a comparatively small tip vortex and hence very little aerodynamic wash-out. The free flight Gamma Gull, therefore, was provided with 1.5 degrees of wash-out, which proved sufficent for flight stability and tow-line perrformance..." 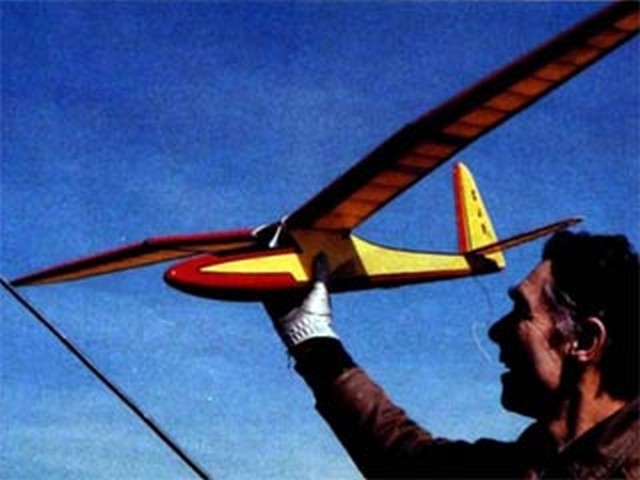