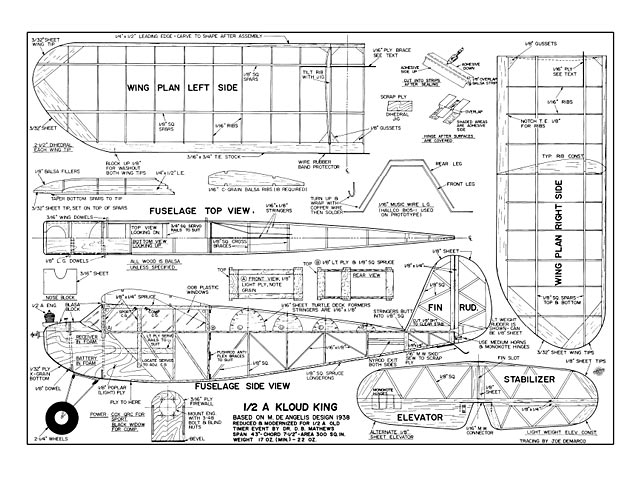 Quote: "This scaled-down version of a 1938 design is a great RC assist fun flier, or it can be built more lightly for 1/2A Texaco Old-Timer competitions. For .049 engines, two-channel controls. Kloud King, by Dee B Mathews.

THE EARLIEST RULES governing competition of models with internal combustion engines were based on fuel allotment. Engine runs were limited to try to reduce the alarming number of fly-aways being experienced in contests. Generally, the fuel was allotted based on the model's weight. The Texas Oil Co donated a perpetual trophy for the winner of the annual National Model Airplane Championships, and to this day fuel allotment events in the Society of Antique Models (SAM) competitions are referred to as Texaco.

RC Texaco, as currently flown, uses 1/4 oz of fuel for each pound of model weight (with a 1-3/4 oz maximum). Some local contest rules further reduce this allotment to 1/8 oz, but winning times are still often in excess of one hour when thermals are present. Eligible designs, under SAM rules, are those published or kitted prior to 1939, with the Lanzo Record Breaker (oz427), Ehling Contest Winner, Dallaire (oz6098), and other seven and eight-foot models predominating.

The obvious inconvenience of transporting and storing such large models, coupled with the large expenditure required, motivated SAM 49 Chapter members and other West Coast Old-Timer fliers to develop a Texaco event for 1/2A models. The first contest was held at Taft, CA on December 5, 1979 as part of the 49ers annual contest. Since that time, the concept has swept the country. It is rapidly earning itself a position of popularity as a low cost and highly enjoyable RC Old-Timer activity.

At present, 1/2A Texaco is a rather loosely structured, low key, fly-for-fun event. The only current rules are a minimum wing loading of 8 oz / sq ft, no major alteration of the original design's moments or airfoil, and the mandatory use of a Cox reed-valve engine.

Events are run by simply having the contestant fill the standard Cox tank, fire up the engine, and launch. Timing is usually a total of three flights, with some local variation on what constitutes an attempt, etc. It's a simple event to organize, administer, and (most important) to enter. In this writer's opinion, 1/2A Texaco is an ideal entry point into the world of Old-Timer RC competition. As an added benefit, these little models are also excellent sport fliers.

When we became aware of the proposed 1/2A Texaco concept, naturally we decided to try our hand at it. Since few plans and only one kit were available in the early months of 1980, we opted to design and build our own. Since Mickey DeAngelis' Kloud King (oz5215) was the first Old-Timer converted to RC that this writer had published (July 1975 Model Aviation, Vol.1, No.1), it holds a special spot in our heart. It was, therefore, the logical choice. We arbitrarily scaled it down to 300 sq in. This turned out to be a rather good choice, as this is the average size that most fliers are using.

We didn't have a micro radio system, so we opted to use a pair of 1.2 oz. Cannon servos, a four-channel receiver, and a 225 mAh battery. While one of the micro systems would save approximately 3.5 oz of weight, the 1/2A Kloud King performs very well as it came out.

The original Kloud King was designed by Mickey DeAngelis in 1938. Powered with a Brown Junior engine, it set an endurance record of 10 min, 43 sec at Mercer Airport, Trenton NJ on May 22, 1938. DeAngelis designs - the Trenton Terror (oz1170) is another - are notable for their simple, functional and strong construction..." 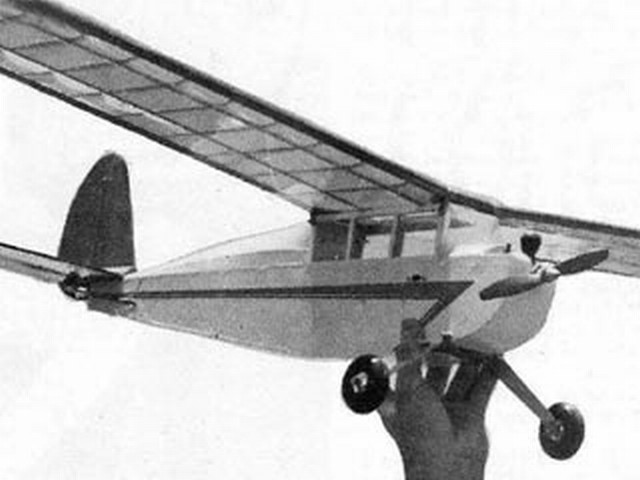 Hi Steve, I have been out of the hobby for a few years but came across your wonderful service and thank you for this amazing initiative and resource. I have completed two scratch-built models in my time, a Kloud King and Simplex. Attached please find a pic of the Kloud King [pic 003] which I built in 2004 and which is still intact and airworthy and will probably be used for my comeback, just in case you would like it for your archives.
Kind regards,
JonathanR - 06/04/2020
Add a comment