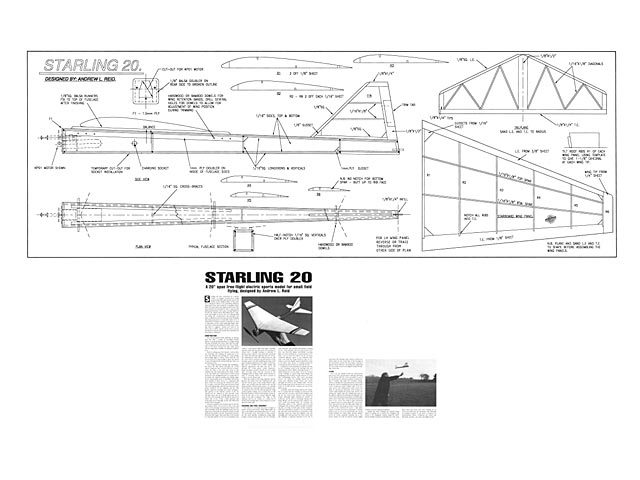 Quote: "Starling 20 was conceived as a sports model of rugged construction using modern materials and electric power for flying on the smallest fields, at the same time making an effort to do something different appearance-wise, that would be a complete break from the usual semi-scale light aircraft looks. This little model is not intended to have a spectacular gliding performance, but to give average flights of around the minute mark, depending upon conditions and length of motor run, on a playing field size flying site.

Construction and operation are quite straightforward, but some previous building and flying experience is desirable. Either CO2 or small diesel and glow motors could also be used as alternative power units (although flight characteristics will undoubtedly be rather more exciting with IC engines! - unless you want to try micro R/C. A KP01 electric motor unit is recommended for relaxed and trouble free operation in all weather conditions.

CONSTRUCTION: This should present little difficulty to anyone who has built a couple of free-flight models before. As usual, paying attention to weight saving will pay dividends, but select balsa that has sufficient strength for the job and is not soft or brittle. One of the quick setting PVA type white glues will he found most suitable for general construction.

Start by making up a 'kit of parts', such as they are, selecting and sanding all stripwood to he used and planing and sanding the wing leading and trailing edges to shape. Check that the cut-out in former F1 is big enough to allow the motor to pass through freely, and pre-drill the holes for the fixing screws.

Next, make the basic fuselage side assemblies, pin down the side sheets and glue the 1/16 square longerons and verticals directly to them. Leave the sides to dry and start work on the tailplane, fin and wing frameworks. There is little to be said about the construction of these items which are very straightforward. It is important to pre-shape the tapered leading and trailing edges of the wing panels prior to assembly. This keeps final sanding of these items to a minimum and thus avoids over-stressing the framework joints. Try to make a neat job of the joints between wing ribs and leading-edge, and the internals and outer frame members on the tailplane and fin. This greatly improves strength and warp resistance. The gussets at the bottom corners of the tin should not be omitted as they provide extra strength when the fin is finally glued directly to the top of the fuselage. Pins should be placed on either side of the 1/16in x 1/8 internals and wing spars, never through, as this will effectively destroy their strength.

Having completed the frameworks for the fly-ing surfaces, these can in turn he left to dry, and work on the fuselage recommenced. Remove the side assemblies from the building board and true them up so that both are identical (mark out and drill the ply doublers for the wing band retention dowels at this stage). Glue each side to the former F1, and pull together at the rear end..."

Article pages, thanks to Algy2. 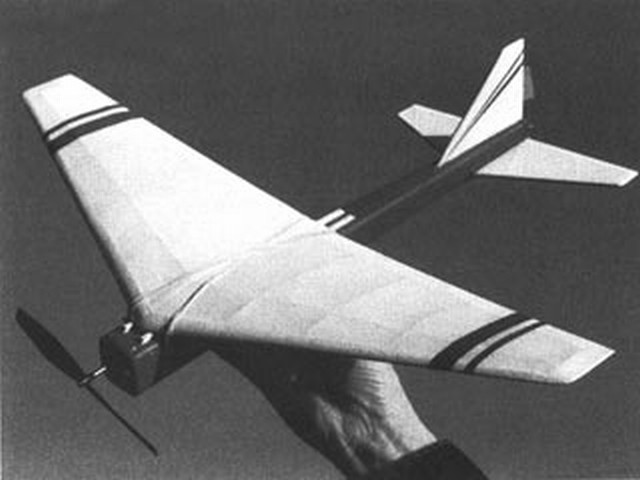