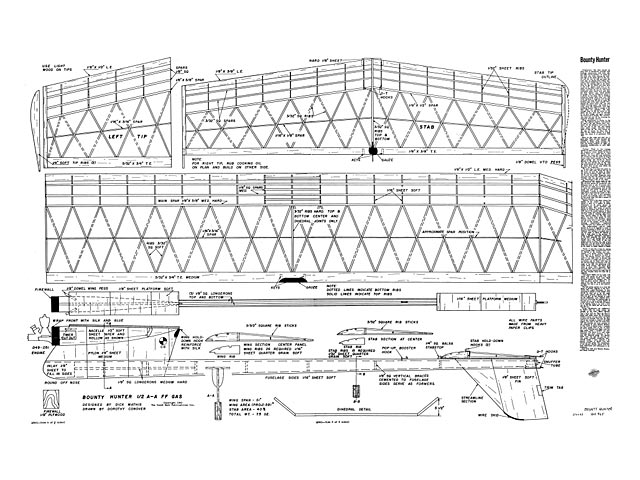 Quote: "This ship lives up to its name. It does everything but accept the tro-phies. It's no one-man design either, since many others are winning with it in sizes up to 1,000 square inches and all over the Southwest,

The Bounty Hunter is an unusual bird, but there are good reasons for its differences. And, unlike most well-known designs, the reasons were considered before the first ship was built, not afterward. It isn't just a re-designed version of an old standard.

Have you ever considered when the big designs of today were first introduced? The Starduster, the Ramrod and the Satellite were all conceived before 1959, which is six years ago. That was before the unlimited weight rules, before the super-hot Cox Tee Dee .049, before exotic fuels like K&B speed fuel and Wysong's This-is-it were generally available, before pressure fuel feed became popular and before really good contest balsa was accessible to everyone.

These are big changes and it would appear that a new idea or two might take advantage of the increased power, reliability and the potentially lighter weight. But, no! It seems that everyone is content to stick with the same old stuff, or minor modifications, and just see how much higher models will climb. If any manufacturer comes up with a hotter engine we will be faced with re-entry problems.

There is a human, not aerodynamic limit beyond which altitude in the climb hurts rather than helps. A hot Starduster got so high in nineteen sec-onds that a good thermal could take it out of sight in less than three minutes. The timer isn't the only one who can't see it. What about the frantic retriever chasing a speck overhead? To avoid this problem, many excellent flyers purposely cut their motor runs short. (New rules enforce the short run.) Would you fight Zorro with your X-Acto knife if you had an axe at your disposal? That's what these guys were doing.

Why don't we put some of that excess climb into a better glide? The two best ways would be to use higher aspect ratios and high lift-drag airfoils or to use more wing area. Of the two choices, the latter is preferable since it makes the whole thing easier to see. Also, there seems to be more possibili-ties for a fine glide in reducing the wing loading (weight divided by area equals wing loading) and the only practical way to reduce wing loading now is to build bigger ships.

This is easy to see, since we have about three ounces of inert weight consisting of the engine, prop, tank, timer, screws, hooks, fuse rubber bands, fuel and the fuel tubing..." 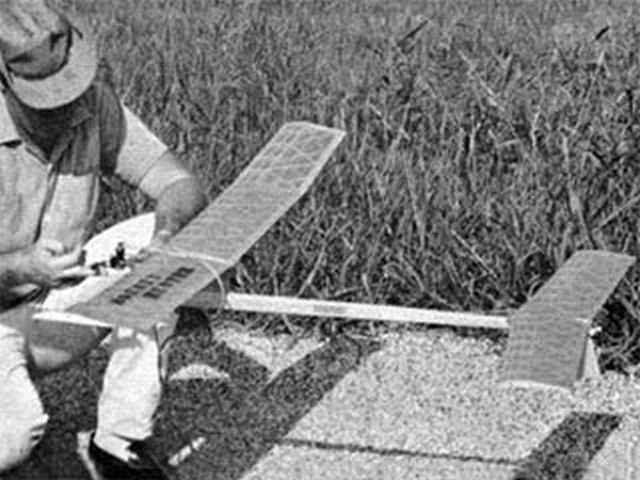