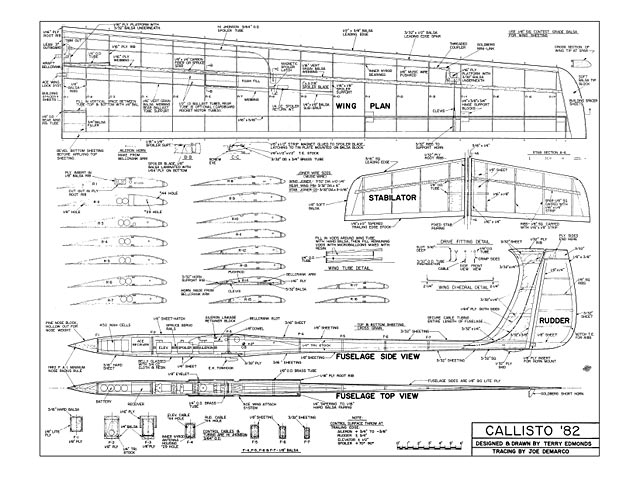 Quote: "If you want a high-performance RC Sailplane, this one is for you. It takes the configuration of current F3B designs and combines that with a lightweight and strong structure for AMA-type contests in the Modified Standard class. It's a winnner!

SAILPLANE DESIGNS for Thermal Duration events in the U.S. have not changed dramatically in the last several years. Subtle im-provements in airfoil shape, lower drag, etc., have appeared, but the predominant basic design is still the floater type with polyhedral and controls of rudder and elevator. However, in other parts of the world, mainly Europe, large ad-
vances in FAI F3B Sailplanes have recently occurred. F3B Sailplanes are generally built stronger and heavier (to survive the Speed task) than what is used for Duration competition. Attempting to com-pete with an F3B plane in a Dura-tion event against a floater type often results in the floaters turning in better times under light air conditions.

The Callisto is a Sailplane of the F3B configuration, but with a wing loading comparable to current Standard-class planes. The prototype has a 7.26 oz / sq ft wing loading. The plane utilizes coupled ailerons and rudder, a T-tail stabilator, and spoilers for speed control. It has a built-up fully-sheeted wing (resulting in exceptional strength) and a smooth airfoil.

Drag has been kept to a minimum by using a slender fuselage, thin tail surfaces, and smooth contours.

Ballast tubes are incorporated in the wing. Ballast loading is accomplished through the spoiler bay; thus the wings do not have to be removed for changing ballast. One set of ballast tubes holds 39 oz of weight. A second set can be built to double the capacity.

Flight performance has been better than ex-pected. Maneuverability with the coupled ailerons and rudder is a vast improvement over conventional controls. The turning response is immediate with no lag time..." 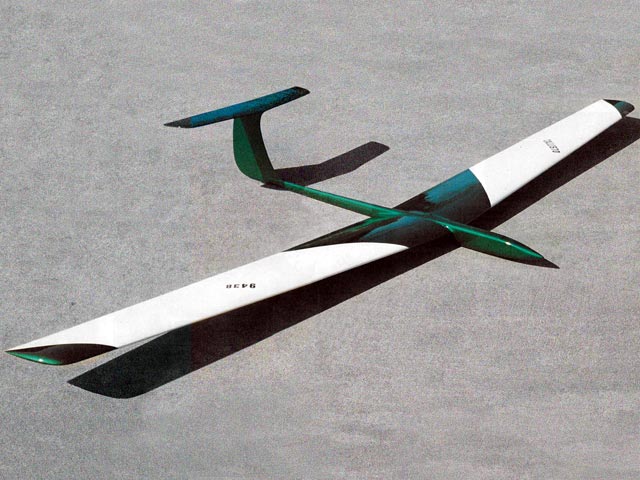 Please find attached a number of pics of my version of Terry Edmunds Callisto 82 [pics 004-007]. I have called it the 'Kallisto 21', K for Ken and 21 for the year. Due to the nature of our flying area, flat field in a valley without any launching aids, I modified the plan as follows: Converted to electric power. Added 1cm to the width and 1cm to the depth of the fuze to accommodate batteries etc. Add winglets. Used .6mm ply on rear of fuze to improve strength. Used carbon fibre tube in place of dowelling for the wing mounts and also to replace thebrass tubing as I saw no use in adding any ballast lead. Placed servos in the wings for the ailerons and the spoilers. Used Transmitter coupling for the rudder. The Build was started in March 2020 and took about 13 months to build with the maiden flight 29th June 2021 at the Hobart Model Aero Club, Tasmania
Ken Ward - 01/07/2021
Mr. Ward: thanks for a concise and informative rundown of your modifications. Nice looking bird.
D. McKay - 08/07/2021
Hi there- is there any chance of getting in touch with Ken regarding the modifications he did? I would like to understand some of the changes in a bit more detail.
Many thanks
Jeff lopes - 11/08/2022
Sorry, this is my mistake, I have lost the attached email address. Ken, are you out there reading this?
SteveWMD - 11/08/2022
Add a comment