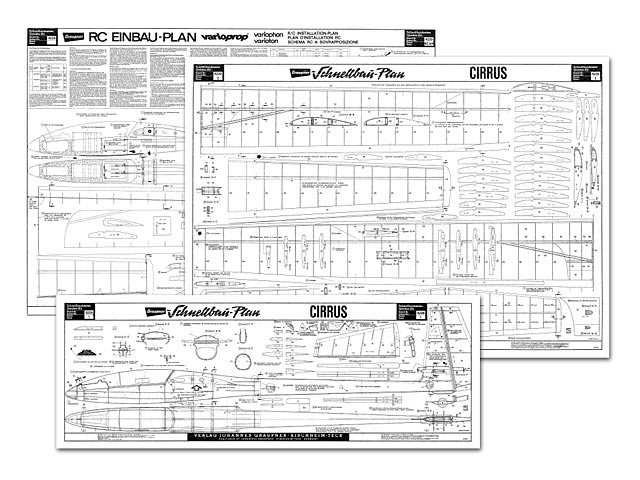 Quote: "The model version of the Cirrus sailplane offers a wingspan of 118-1/8 in, approximate scale is 1/6th.

The design of the model required several deviations from the dimensions of the fullsize machine in order to gain optimum flight characteristics and performance.

The photos show the sailplane owned by the Fliegergruppe Wolf Hirth of Kirchheim/Teck. This plane carries the name 'Rolf Kuntz'. It sports a slightly larger wingspan than the standard version.

A prominent feature of the model's wing is its high aspect ratio. With a ratio of 1:17 it closely resembles the fullsize ship's shape. Thanks to its torsion box leading edge and the appropriately selected airfoil shape the wing is nonetheless torsionally stiff and strong.

In the case of the canopy no attempt has been made to duplicate the intersection between the fixed and the sliding section of the canopy. He who wishes to incorporate such detail may paint it on, using a non-shrinking varnish (such as Alyyfiz enamel varnish, ident no 1470). Refer to plan for details.

As a departure from fullsize practice the model has been designed with a full floating stabilator. This is an adventage from both a constructional and an aerodynamic point of view. In the case of the all moving ailplane the entire surface is used for control about the transverse axis. It is movably mounted and operated via a control horn in the case of the radio control model.

Just like its full size counterpart the Cirrus model is not a dyed-in-the-wool aerobatic model. This is easily recognised from its configuration.

As the model will be generally flown without aileron control, a dihedral angle of 6° has been selected as suiting its wing span best. Wing attachment points at the fuselage are designed for this dihedral angle.

But even if equipped with ailerons the Cirrus is incapable of flying rolls. In this case the ailerons must only be used for attitude control and to initiate circling flight.

Attention: If you are going to incorporate ailerons, please do read the R/C Installation instructions first. For the model equipped with ailerons the dihedral angle may be reduce to approx 4°. To this end the four wire prongs (104) must be bent accordingly. The gap formed by this modification between fuselage and wing panels should be fulled by a conical false rib..." 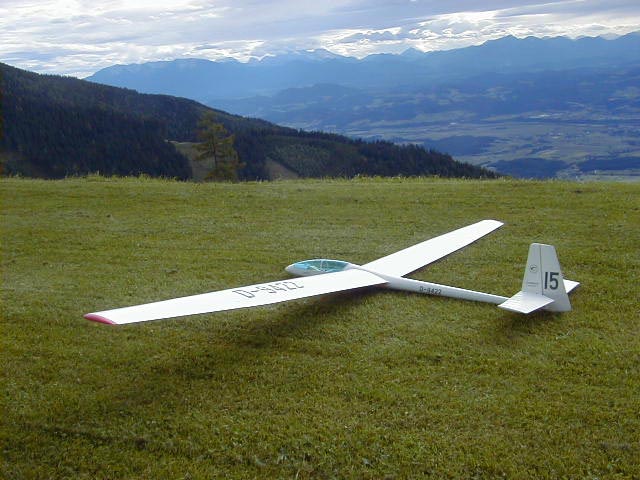 Photo of completed Cirrus model [main model pic] was found online at http://www.koralpe.biz/cirrus.html
SteveWMD - 23/03/2017
I'm glad to see the Cirrus Graupner plan on Outerzone. Cirrus is from 1968, see picture, world champion 1968 [more pics 006]. Here are my three Cirrus gliders, two white and one yellow [more pics 007-009]. My three gliders, built in 1973, have more than 1000 flights, without one crash. The Cirrus flies 100 meters with a hand start.
JulienVermeire - 27/03/2017
I'm a French modeler from Paris, France. I'm rebuilding an old Cirrus from Graupner. It would be super nice and very helpful for me (because the list of materials are in millimeters ) if you have the instructions for the Cirrus in French. They start at page 25. Merci beaucoup et bonne journee.
SergeB - 01/10/2018
Can anyone help Serge with a scan of the instructions in French?
Mary - 01/10/2018
Thanks you very much for this plans. I'm a lover of Cirrus, I'm 65 years old and practice soaring with cirrus in 1980 years!! Is it possible to find fuselage in epoxy or fiberglass or perhaps a guy who sells fuselage in wood? Thanks for work.
Eric - 03/12/2019
Here on Oz there is a plan for front wood fuselage rebuilding, not difficult to add a wrapped plywood rear section, see Cirrus Fuselage (Wood) (oz9876).
On rcgroups some years ago were offered fiberglass fuselages, see https://www.rcgroups.com/forums/showthread.php?2490686-Replacement-fiberglass-fuselage-for-the-Graupner-Cirrus
Pit - 03/12/2019
Hello everyone, I can soon produce fiberglass fuselages with my new moulds. I change the wing profile for a thinner Selig 3021... Sorry... Laser cutted ribs will be also soon available. I'm not a commercial company, so I will produce few shorts kits only for "friends".
Xavier - 09/12/2020
Hello Xavier, SergeB, and anybody, I'm French too, a have a Cirrus from 70's, that stay a long time in my garage ! I would like to make it fly again. But the stab is broken. The wings should be refreshed. And I would like to switch from 2 axes to 3. I'm looking for plan at the good size and any help will be helpfull !
Vince 95120 Ermont
Vince95 - 11/05/2022
Add a comment