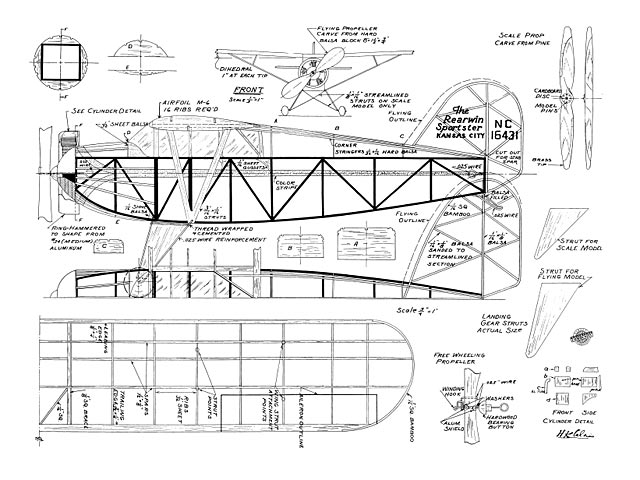 Quote: "Build a flying scale Rearwin Sportster. Here's a good looking model of a popular sport plane that is a fine flyer and easy to build

WITH the rapidly increasing number of planes employing monocoque construction, the model builder in his search for an easily built scale model with unusual flying characteristics is drawn inevitably to the light plane field. Replicas from this class invariably outnumber all other types at flying scale model contests. Such ships are the Taylor Cub and the well known Monocoupe. We present here a model destined to make a place for itself in the ranks of those scale models which do not sacrifice scale appearance for flying ability, nor duration for accuracy of reproduction.

The Rearwin Sportster, powered by a Warner Scarab engine, is one of the more luxurious of the light planes. Its 90 hp engine pulls it along at a top speed of 120 mph. It has a cruising range of 475 miles.

The model has been clocked officially at 1 minute, 12 sec in contest flying, winning an easy first. Since then a free wheeling prop has been added and outdoor fights average two minutes and up, with indoor performance at about fifty seconds.

Fuselage: The fuselage is of standard construction Build two side panels to the heavy black lines in the plans. The longerons and cross braces are 1/16 sq hard balsa, except for the two compression struts at the landing gear which are 1/16 x 1/8. When the two sides are dry, turn them upside down and pin them the proper distance apart on your work bench or some smooth level surface. Cement the cross pieces in place, being careful to keep the whole structure lined up evenly.

Now make the nose block. This may either be carved from a solid block or built up of 1/8 thick sheet balsa cut in circular rings as indicated. The diameters of the rings may be obtained from the drawing. Sand the block smoothly and cement it to the end of the fuselage. Now cut out bulkheads, A, B, C, D, E and F from 1/32 sheet balsa and cement them in place. Do not add the stringers at this time.

Wing: Trace the drawing of the wing with the aid of a piece of carbon paper, putting the carbon paper face up under both the plan and the sheet on which you desire the tracing. This will give you the layout of the left wing. You can now lay out the wing, making two halves, then join the two halves by building in the center section with the proper dihedral..." 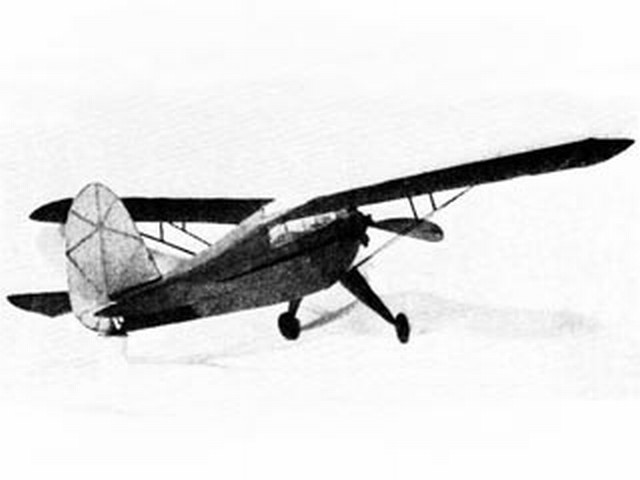